My dad comes round for his dinner every Sunday evening and often we ask him what he would like to eat.  Usually he wants chicken or lamb but the other week, completely out of the blue, he suggested steak and kidney pudding.  Oh heck. 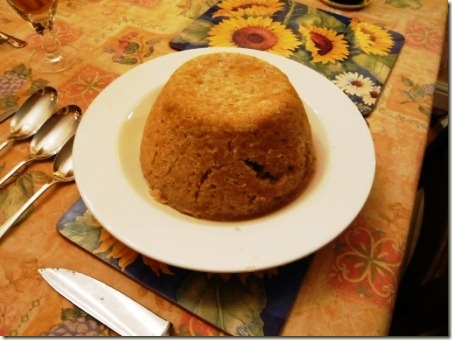 It’s donkey’s years since I ate steak and kidney pudding and I have never ever made one.  My first thought was that it was too fiddly and long-winded and would take all day.  Then I thought well, if you’re going to make it at all, a gloomy Sunday in January is as good a time as any – what else is there to do?

So this is why, at the time of year when everyone else is dieting and detoxing, I found myself in the kitchen making one of the most fattening and stodgy dishes of all time.

We consulted a variety of cookbooks and it would seem there are two distinct methods.  Either make the suet pastry, put the uncooked meat inside and steam for 4-5 hours.  Or, cook the meat first before filling the pastry case and steam for 2 hours.

We decided to go with the second method as we thought it would be a good idea to see what the meat looked and tasted like before putting it in the pudding.  When I say “we”, this is because I was still under the weather with the lurgy so Nick did most of the work.  In the end, the preparation didn’t take all that long but you needed to be in the house for the cooking time, totalling 4 hours, to make sure the meat and the pudding don’t boil dry. 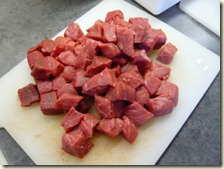 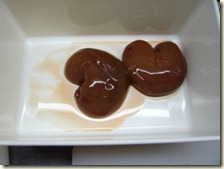 We used good quality braising steak and four lambs’ kidneys.  Nick chopped the kidneys small as although we like the flavour of kidney, we’re not too keen on chomping on a whole one.  They just melted away to nothing but there was plenty of kidney flavour. 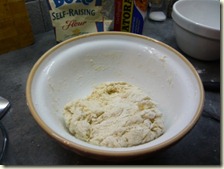 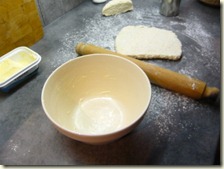 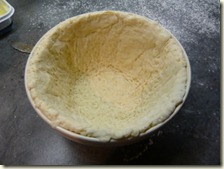 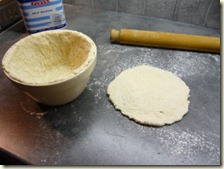 First you make the filling, which is effectively a beef stew, and cook gently on the hob for two hours.  Whilst it’s cooking you have plenty of time to deal with the pastry.

We made traditional suet pastry, using proper Atora beef suet, and it’s easy to make as there’s no rubbing in to do.  He buttered the basin and rolled out the pastry to fit, leaving one third aside for the lid.  (He also reserved a small lump of pastry to make a lid for a separate pie – more about that in a mo.) 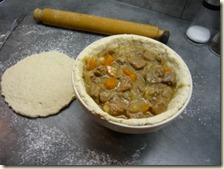 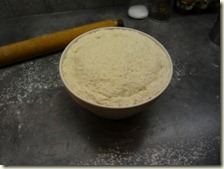 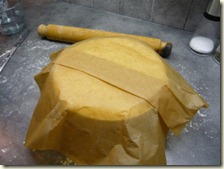 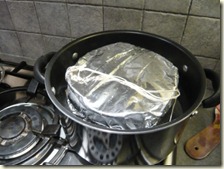 The pudding basin was filled almost to the top with the meat mixture and the lid put on, sealing the edges.  Then a layer of baking paper and foil, both with a large pleat in them, were fastened to the top with string, making a loop to act as a handle.  The pleat allows for expansion of the pudding and the string allows you to lift it out of the pan without scalding yourself. 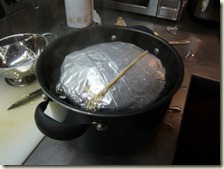 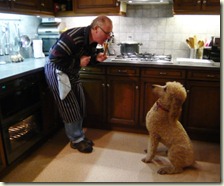 The whole thing was placed in a large pan on an upturned saucer to act as a trivet, to keep the the basin off the bottom of the pan.  We steamed it for two hours, by which time Lulu was becoming very interested in the proceedings and had to be bribed with a chewy stick to stop fussing round the cook !! 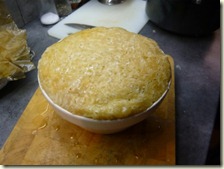 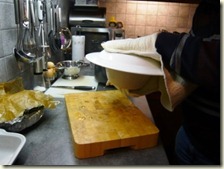 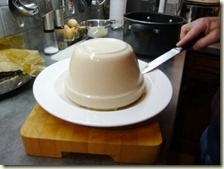 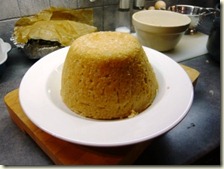 It looked pretty good when we took the foil off and it turned out beautifully – a man’s job of course. 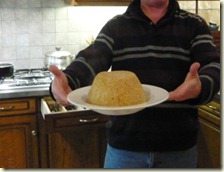 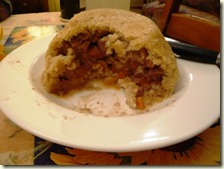 It tasted delicious.  We served it with the liquid left over in the pan when the meat filling was removed, which made an excellent gravy.

We had reserved some of the filling to create a small, individual steak and kidney pie for my dad to take away with him and enjoy later in the week – hence the need for the extra bit of pastry.  He reported back that it was also scrumptious and has put in a repeat order !! 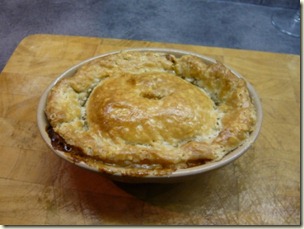 Here’s our version of steak and kidney pudding.

a splash of Worcestershire sauce

Heat the oil in a large pan and brown the onion.  Remove from the pan.

Toss the meat in the seasoned flour and add to the hot oil in batches.  Fry until brown all over.

Return the onions and meat to the pan, add the carrot and herbs.  Add seasoning to taste along with the Worcestershire sauce.  Cover with water and simmer gently until the meat is tender, for about two hours, stirring occasionally .

Grease a one litre pudding basin with plenty of butter.

For the pastry, mix the self-raising flour, salt, pepper and suet in a large bowl.  Make a well in the centre and add cold water, a little at a time, stir to combine and make a dough, bringing it together with your hands.

Reserve one third of the pastry for the lid and roll the rest into a large circle.  It needs to be big enough to line the basin to the top.   Roll out the smaller portion into a circle large enough to form a lid.  Line the basin with the pastry.

Remove the bay leaf and thyme sprigs from the meat mixture and adjust the seasoning to taste.  Fill the basin with the meat, lifting it out of the pan with a slotted spoon, then add the liquid.  It should be wet but not too sloppy.  Any remaining liquid can be reheated to serve as sauce with the pudding.

Dampen the edges of the pastry with water, lay the lid on the top and press together to seal.  Trim to neaten the edges.

Cut a large circle of baking parchment (or greaseproof paper) and foil large enough to cover the basin with an overlap.  Make a pleat in the middle and lay on over the basin, the paper first then the foil on top.  Tie string around the basin just under the lip and make a double loop over the top to make a handle.  Trim if there is a lot of excess.

Place the basin in a large pan on top of an upturned saucer or small flan ring to act as a trivet.  Pour hot water into the pan to about half way up the basin.  Boil for two hours, topping up with boiling water as often as needed to make sure it doesn’t boil dry.

Lift the pudding out of the pan with the string.  Remove the string, foil and paper and carefully invert onto a large plate, preferably one with a lip in case there is any leakage of hot filling.

Stand back and admire your creation !!

Serve with green veg and the reheated liquid, which can be thickened and seasoned to taste.