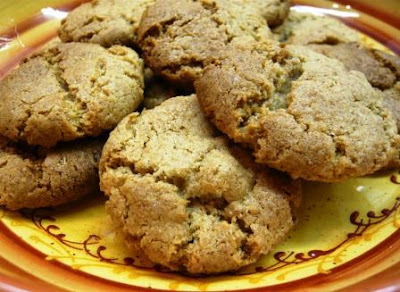 I don't make biscuits very often but these are my favourites to make when I do.  The interesting thing about them is that they're made using spelt flour.
With ordinary flour being rarer than hen's teeth at the moment it occurred to me that one of the flours that might have been left behind on the supermarket shelf by the stockpilers is spelt flour.  So you may just be able to get your hands on some.  In which case I would highly recommend these biscuits. 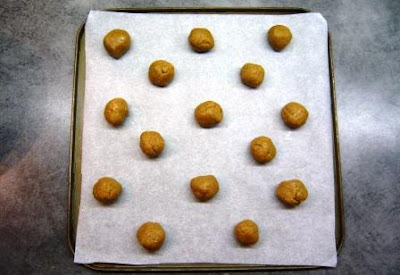 They're quick to put together and bake in just 7 minutes or so.  The added bonus is that the kitchen smells wonderful the minute you start to melt the butter and golden syrup in the pan! 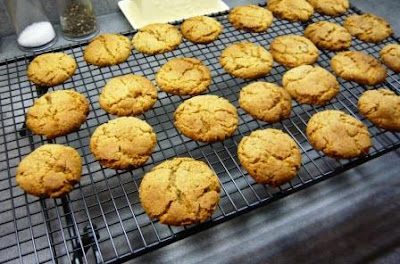 They're a lovely, chewy, gingery biscuit, crisp on the outside and softish in the middle.  They don't actually keep all that well and tend to soften quite quickly - but then keeping them is not usually an issue - they tend not to hang around for too long in our house!
Ingredients
50g butter
50g golden syrup
50g preserved stem ginger from a jar, chopped fairly small
50g golden caster sugar
50g light soft brown sugar
1 egg yolk
150g spelt flour
1 tsp ground ginger
½ tsp bicarbonate of soda

Put the butter, syrup and stem ginger in a small pan and warm gently until the butter has melted.  Enjoy the glorious aroma!

Remove from the heat, beat in the sugars and egg yolk, followed by the remaining dry ingredients.  Mix together until well combined.

Take smallish, walnut-sized pieces of the dough (mine weighed about 15g each) and roll into balls.  Divide the balls between the baking sheets allowing plenty of room between them for them to spread.

Bake for 7-8 minutes until golden brown and puffed up.  Remove from the oven and leave on the baking sheets until they have collapsed back down.  Then lift them carefully onto a wire rack to cool.

more of the same biscuits, faff factor *, ginger, the virus