BANANA AND LEMON DRIZZLE CAKE and a tale of two banana cakes. 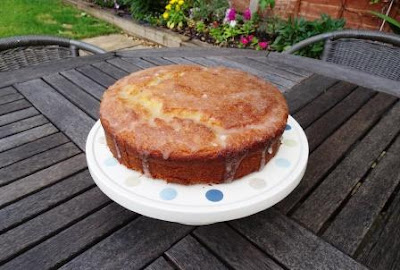 It was the usual story, three neglected bananas calling to me from the fruit bowl, getting browner with every day.  So, with nothing better to do than bake a cake I decided to make one that had popped up a couple of times in various places on the internet recently. 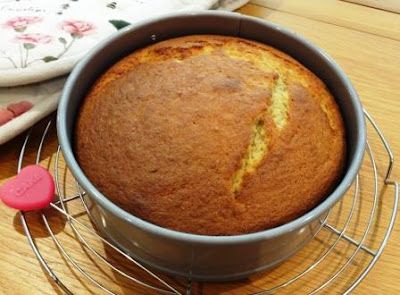 It's a Mary Berry recipe for a banana and lemon drizzle cake from her book "One Step Ahead". 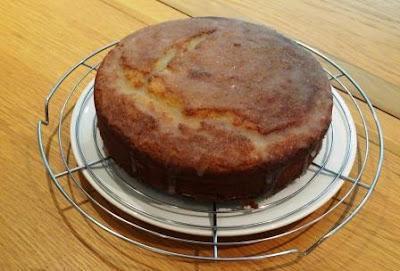 Banana and lemon are two of my favourite cakes and the combination sounded slightly intriguing.  I decided to give it a go.  Nick is not fond of (dislikes intensely) banana cake but loves lemon cake so I hoped that the lemon might make the cake edible for him.  That he might even enjoy a slice. 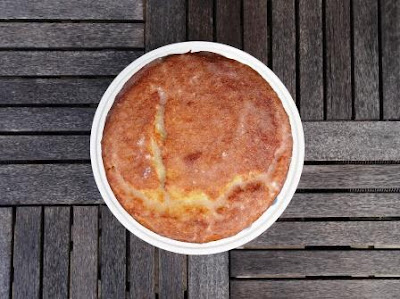 I was wrong.  It was not for him, but I thought it was a lovely cake.  The sharpness of the lemon contrasted well with the sweetness of the banana and the texture was lovely.  Definitely a keeper and one that I shall make again.  Useful for the charity cake stalls methinks - easy and quick to make, a bit unusual and easy to cut into robust slices. 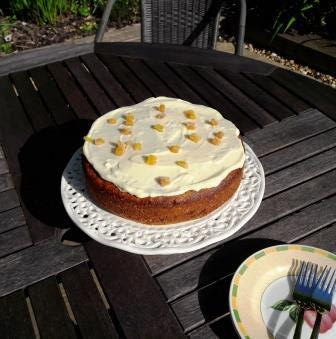 Now for banana cake number two.  Well number one actually as I made it a few weeks before the other one. 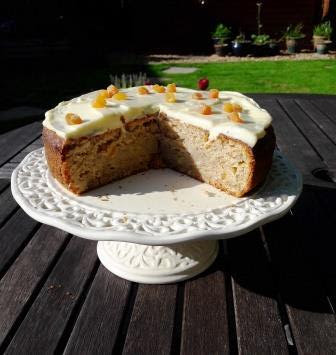 It was early in the lockdown and I had been taking stock of what baking ingredients I had in the house.  One of the things I was short of was butter, or rather, the spreadable butter that I usually use for cakes.  Then I remembered a recipe I had seen on the Trex website here.  There are numerous recipes for cakes, biscuits and buns on this website and I had spotted one for a banana cake with apricots in it a while ago.  "Why not?" I thought.  Years ago I had made something called a War Cake using lard instead of butter and it was delicious.
Well, it was disappointing to say the least.  It had a lovely texture, the cream cheese topping was divine and the little bits of apricot in it were a nice touch.  But unfortunately it tasted of lard.  It was not a strong lardy flavour (and I know that Trex is not lard) but it was unmistakably not butter.  It had a slightly cloying after taste that was quite unpleasant.  I will probably make the cake again one day using butter instead because everything else about it was good and it deserves a second chance.
Ingredients for the banana and lemon cake
175g butter, softened (I used Stork for Cakes)
175g caster sugar
3 eggs
300g self raising flour
2 tsp baking powder
2 ripe bananas, peeled and mashed
zest of half a lemon
2 tblsp milk
For the topping
juice of 1 lemon
100g granulated sugar
Method
Preheat the oven to 180C / 160 fan / gas mk5.  Butter a 20cm round, deep springform tin and line the base with a circle of baking parchment.
Put all the cake ingredients into a large bowl and using a hand held electric whisk, beat together until smooth and creamy.  Pour into the tin and level the top.
Bake for 45-50 minutes until lightly browned and done.  Cool in the tin for a few minutes then transfer to a wire rack.
Mix the lemon juice and sugar together for the topping and spoon over the cake while it's still warm, spreading it out to the edges.  Putting the rack over a large plate will help to catch the drips which can then be poured back over the cake.
Cool completely before slicing.
Cuts into 8-10 slices.
CHANGING THE SUBJECT.  A note about the new Blogger writing and editing format.  It's terrible.  It takes ages to upload pictures and a lot of faffing about to get them in the right place and I can't figure out how to resize them.  The area you have to work on is tiny which means you're constantly having to scroll up and down to see how things look.
It's absolute rubbish and I can only think that Blogger want to drive all their bloggers away.