When we were in France for the week between Christmas and New Year, we did quite a bit of home cooking.  We invited our friends Ken and Walt for lunch and Nick decided to do one of his favourite puddings,  pears poached in red wine. 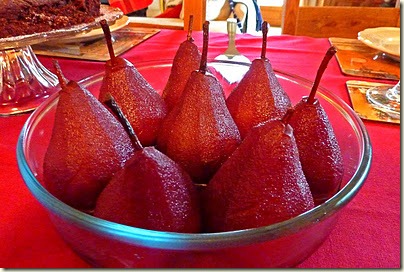 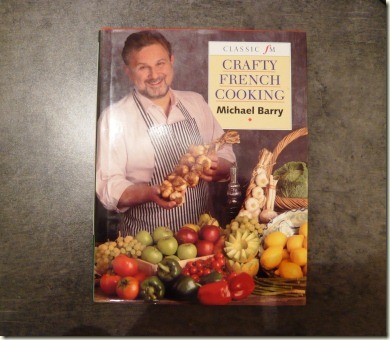 The recipe comes from this book by Michael Barry, and is a classic French dessert.  I gave the book to Nick for Christmas in 1996 and it contains easy versions of recipes for many familiar French dishes, some of which are otherwise immensely complicated and require much forward planning, beginning the preparation days before the food is served.

Sadly, Michael Barry died last year at the age of 69.  I remember him well from the BBC Food and Drink programme which we watched regularly. 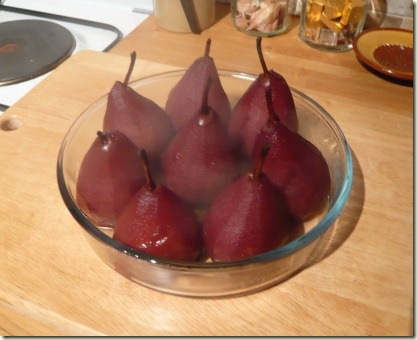 It is very easy to make.  You simply peel and core the pears leaving the stalks on, immerse them in red wine and cook for hours and hours in a low oven.  There is a quick way to do it but they taste better if you do it the long way.  It is also best to use a reasonably good red wine; we find a Merlot works well.

We served our with a slice of rich, flourless chocolate torte, the syrup the pears were poached in and a little cream.  Leftovers are also good served with cheese, we discovered.

Peel the pears leaving the stalks on. Remove the cores.

Put in an ovenproof dish, add the other ingredients, top up with water to cover the pears.

Or, if you are lucky enough to have an Aga, leave them in the simmering oven overnight.   Alternatively, cook very gently on the hob for 1½ hours if you want to use the quick method.

Rapidly boil the remaining liquid until it has reduced to serve as a syrup. Serve cool.

(Thanks to Ken for his picture of the pears on the table – ours was taken just as they came out of the oven and was a bit steamy !!)