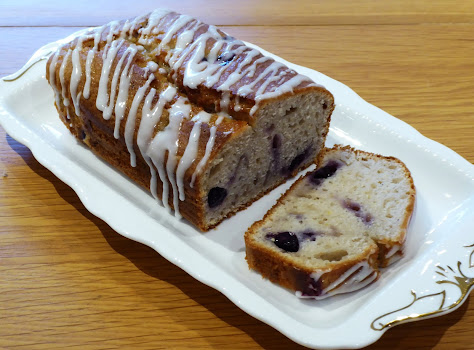 This is a recipe I have had my eye on for quite a while.  Blogger and blog friend Angela posted about it last year as you can see here.  The original recipe comes from the Dairy Diary cook book.  Do you remember the Dairy Diary?  I definitely used to buy the occasional copy in the 70's and 80's but didn't keep them.  They're still being produced and every December our milkman leaves us an order form for one - we haven't been tempted yet although some of the recipe books look interesting (and I do like a new recipe book!)

You will find the original recipe for this on the Dairy Diary website here along with lots of other really good ones.  This is one of those "just mix it all together and bake" kind of recipes of which I am a great fan! 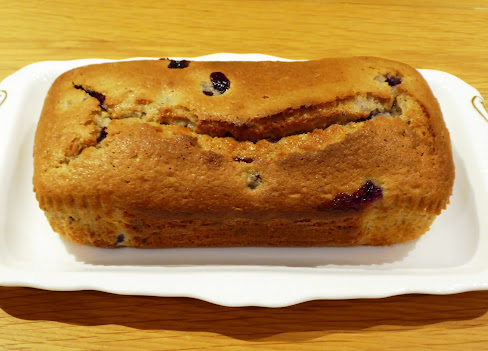 On the website the recipe uses melted butter but in Angela's version she uses oil instead.  If it's a tried and tested old recipe, I wonder if it originally said to use oil and that butter is a recent change.  I have noticed before that recipes get changed on websites without any mention of it.  For example, my well used recipe for upside down cake using fresh pineapple on the Tesco website has been changed to use tinned pineapple - see here.
Angela also adapted the recipe to use some blackberries instead of the stated mixed peel which makes me think that this is yet another of those very useful recipes that can be adapted for whatever you have in stock.  I'm a great fan of those, too!
For mine I used blueberry yoghurt and some blueberries, with the zest of a lemon for good measure.  Annoyingly, my pot of yoghurt was 30g short of the required amount so I put a dollop of crème fraîche in as well.
The cake was beautifully moist and kept well for several days, the last few slices being used as a pudding with a good slathering of instant custard.
However, I'm putting this on my list of recipes for tweaking, just because I'm curious to try it with butter instead of oil.  "Just because"  as my mum used to say when asked the eternal question "why?"!  There are quite a few on the list now, some of which turned out a disappointment but I thought they deserve a second try.
The list goes like this:
The Dairy Diary yoghurt cake (in this post) - try butter instead of oil "just because".
The banana and apricot cake from the Trex website, see here - try butter instead of Trex to improve flavour.
The country apple cake from the Good Food website, see here - try more chocolate to get any kind of flavour!
The rose and coconut cake from the Whitworth's website, see here - try more coconut because not coconutty enough.  *This recipe has now been removed from the Whitworth's website.
The last three of these cakes were frustratingly not quite right but had elements about them that deserved a second chance.  With plenty of time on my hands due to the lockdown it could be now or never!
Ingredients
For the cake
150g pot of blueberry yoghurt
175 self raising flour
150g caster sugar
1 tblsp oil
2 eggs, beaten
70g blueberries
1 lemon, zest only
For the icing
2 tblsp sifted icing sugar
lemon juice
Method
Preheat the oven to 180° C / 160° fan / gas mk 4.  Grease and line the base and ends of a 2lb loaf tin, or use a paper liner.
In a large bowl, mix together all the cake ingredients except for the fruit until well combined.  Fold in the blueberries until evenly distributed.
Transfer to the tin and level the top.  Bake for 30-40 minutes until done.  Cool in the tin for 15 minutes then turn out onto a wire rack to finish cooling.
When cool, drizzle with an icing made from the icing sugar mixed with just enough lemon juice to make it runny but not too thin.
Cuts into 8-10 slices.