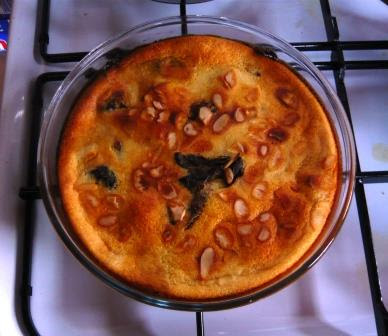 Talking about Agen prunes in my previous post reminded me of a dessert I made using prunes soaked in brandy a long time ago.  In a snatched half hour between the drying of coats of paint in our newly created bedroom upstairs I did a bit of research and found the photos - as far back as 2010.  Gosh, was it really that long ago that I made this clafoutis?  How time flies! 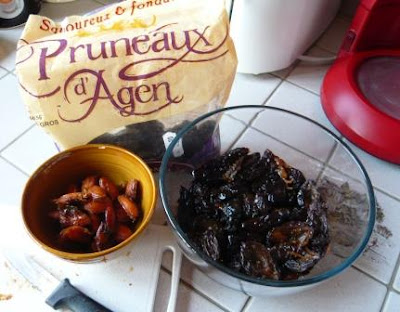 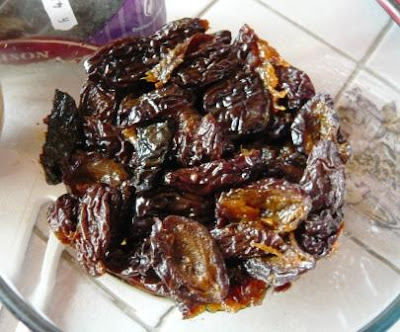 A clafoutis is a very popular dessert in France, most often made using fresh cherries during the cherry season and then apricots and plums a bit later on.  It is basically a dessert consisting of seasonal fruit baked in a batter.  Sometimes it is served in spoonfuls from the dish, other times it is served sliced like a cake.  Either way, it's lovely and there are zillions of recipes for it out there. I have also made a caramelised apple clafoutis which was gorgeous (see here) and a banana clafoutis, using as it happens gluten free flour (see here) which was equally delicious for banana fans but by no means traditional.
My favourite recipe comes from my friend Susan which you can see here.  Soon after her recipe appeared in her blog I used it to make a cherry clafoutis and wrote about it as a holiday cooking post in another blog.  A follower then left a comment that she makes a clafoutis using prunes soaked in brandy and I was intrigued.  It was one of those things that I felt compelled to make as soon as possible so I did - and I have to say that if you are a fan of prunes - it was delicious!  Consequently it is time I wrote about it here. 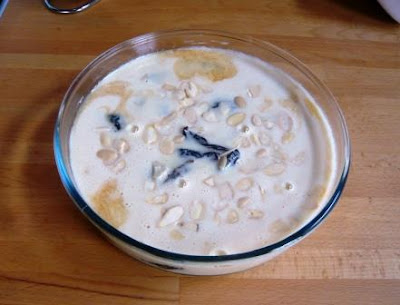 Stoning the prunes proved to be a fiddly, sticky and messy job. At first the stones I removed had most of the flesh of the prunes still attached to them and a lot of the rest of it was all over my hands and stuck to my sleeves. After a bit of practice I found a technique that succeeded in removing the stone and leaving most of the precious prunes intact. Agen prunes are quite expensive so not to be wasted if possible.
The technique is to hold the prune with its flatter sides between finger and thumb then cut into it with a sharp knife down to the stone, run the knife all around the edge of the stone then flip the prune open and if you’re very lucky the stone comes out clean (ish).  Because of this I have given the recipe faff factor ** as fiddling about stoning prunes is not my favourite pastime!
I then soaked them in about two tablespoons of brandy for a couple of hours.

The lady who left the comment about soaking them in brandy then came back with a second one saying that she doesn't bother stoning the prunes, just serves the clafoutis with a health warning and the address of the nearest dentist!

Ingredients
100-150g Agen prunes, stones removed
2 tblsp brandy for soaking the prunes
50g plain flour
50g ground almonds
100g sugar
½ teaspoon vanilla extract
2 eggs
250ml plain yoghurt or a mixture of yoghurt and whole milk
a handful of flaked almonds (optional)
Method
2 hours before making the clafoutis, prepare the prunes by stoning them and soaking in the brandy.
Preheat the oven to 180°C / 160°fan.  Butter a suitable baking dish or pie dish.  Lay the fruit in an even layer in the dish.
Put all the other ingredients except for the flaked almonds into a bowl and whisk with an electric whisk or hand blender until you have a smooth batter.
Pour the batter over the fruit, scatter the flaked almonds on top if using them, and bake for 30-40 minutes until golden brown and firm.
Serve warm by itself, or with cream or ice cream.
Serves 4-6 people.
5 comments: 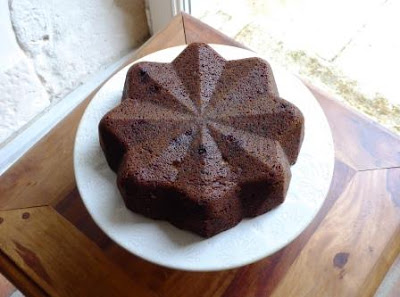 Nick made this cake for our most recent cake club meeting and it proved to be very popular. 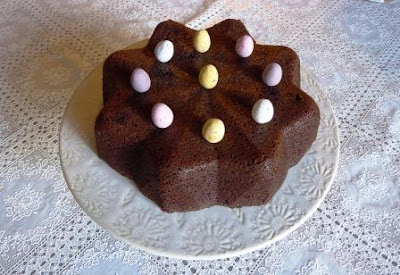 The brief was one's own personal angle on Easter and as Nick is very much a fan of ginger cake he decided to make one in an angular tin, decorated with a few mini eggs. 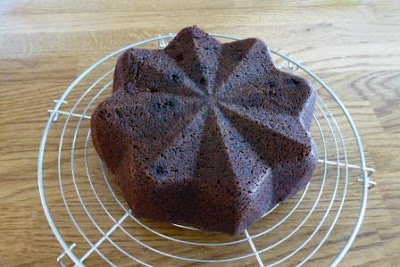 The tin was a purchase from Ikea a few years back and I don't think they have it in stock any more.  It's an excellent tin, makes an ordinary cake look a bit more interesting and I have found that it works for any recipe that uses either a 2lb loaf tin or a 20cm round tin.  Because of the shape it's particularly good for cakes that you don't want to ice or decorate to make them look tempting.
Not that this cake was by any means ordinary - not at all.  The recipe comes from the Whitworths website and uses their crystallised fiery ginger, of which we happened to have a packet in the cupboard.  The prunes are Agen prunes, gloriously sticky things from the south of France and nothing like the dried poor relations often masquerading as prunes elsewhere.  (Other really nice prunes are of course available.)  One of the items where you definitely get what you pay for is prunes. 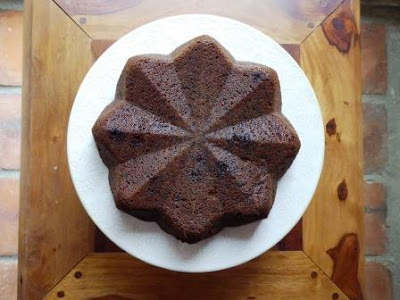 There are plenty of people who have an aversion to prunes - or see them as a bit of a joke - their medicinal and constitutional properties being the foundation for many a jest about old folks' homes, school dinners and more.  However, I think you would be hard pressed to identify that the deliciously sticky fruitiness of this cake comes from the humble (or holy) prune, it just tastes strongly of ginger with a fruity texture and flavour.  A great hit and one I shall be making again. You can see the original recipe here.
I have baked other lovely things with prunes so if you're a fan you could look at Chocolate Prune Cake, Prune and Brandy Clafoutis and Prune and Apple Layer Cake.
Ingredients
25g crystallised ginger, finely chopped
70g good quality prunes
150g golden syrup
50g black treacle
110g dark brown soft sugar
150g unsalted butter
8g ground ginger
2g ground mixed spice
2 eggs
2 tlsp semi skimmed milk
120g self raising flour
Method
Preheat the oven to 160 C / 140 fan / gas mk 3.  Grease and line an 18cm round tin.  (Or grease with cake release paste if using a fancy tin.)
Purée the prunes in a food processor (or chop them very finely) then transfer to a large saucepan.
Add the golden syrup, treacle, sugar and butter to the pan and stir together on low heat until evenly combined.
Remove from the heat.
Stir in the ground ginger, mixed spice and chopped ginger.
Lightly beat the eggs and milk together and stir into the pan to form a smooth batter.
Sift over the flour and fold into the batter.  Transfer to the prepared tin.
Bake for about 1 hour until springy to the touch.
Remove from the oven and cool in the tin.
Dust with icing sugar before serving.
Cuts into 10-12 slices.
2 comments:

APPLE AND LEMON CAKE and a rather good discovery. 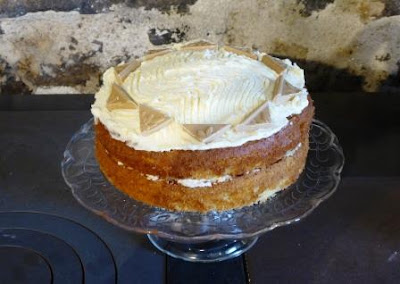 This is one of Mary Berry's most recent recipes, appearing in her latest TV series, the book that goes with it and in several places on the internet, one of which you can see here.  I was dying to have a go at making it but was so busy with other stuff that I had to put it on the back burner, so to speak, until I had the opportunity. 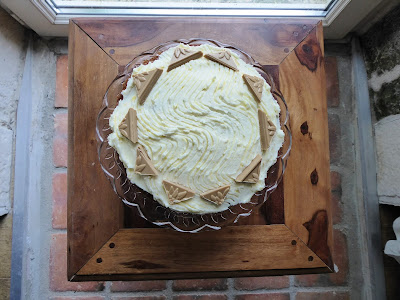 That opportunity arose with last month's cake club meeting (which you can read all about here).  It was hosted by a club member who lives in what is undoubtedly one of the most beautiful villages in the region, if not in all of France, a place called Angles-sur-l'Anglin.  The village is steeped in ancient history with an old ruined château, prehistoric cave paintings, a water mill by the river, zillions of gorgeous old houses and oodles of charm.  Yet it is not spoiled in a touristy way.  Certainly in summer at the weekend you can't move for tourists but it still remains a largely unspoilt village.
The host's theme revolved around the village, suggesting a château gateau, a cake for a princess and many other options including, for those of us who had no idea what to make of it, our own Angle on Easter.  Hence I chose to fill and top my cake with a lemon buttercream instead of Mary's way which was to fill with whipped cream with lemon curd swirled through it and a simple dusting of icing sugar on top.  Which would have been more classy but did not allow for any decoration as per the brief.  I needed a buttercream top to stick the decorations in! 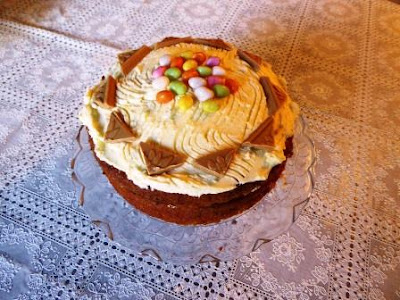 I decorated my cake with triangles of a thin chocolate bar and mini Easter eggs that were not chocolate but fruity, thereby complying with the "Angles on Easter" theme.  The rather good discovery referred to in the title of this post was the chocolate. 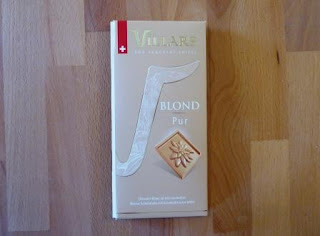 As it turned out it tastes absolutely like Caramac.  A Caramac bar was a real treat when I was a little girl and its unique caramel flavour is to die for.  I haven't seen it in the shops for years although to be fair, I haven't been looking - the confectionary aisle of any supermarket is out of bounds, being far too dangerous.  Well now I have found a substitute which I can get my hands on any day I like (in France) so I'm dead chuffed with that. 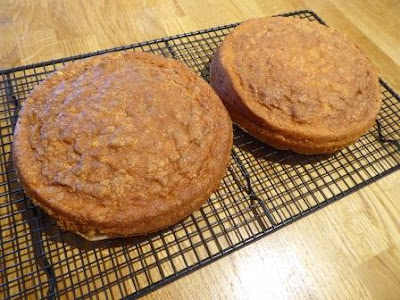 I was not too chuffed when I took the cakes out of the oven as they didn't look very enticing.  A good slather with lemon buttercream improved matters (until I decorated the cake) but the cake was actually quite lovely. 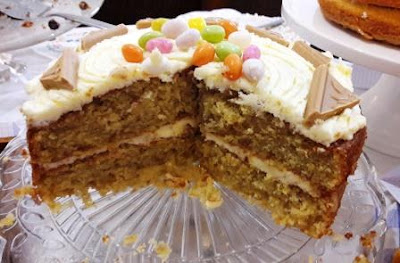 It had an excellent, even crumb and was nice and moist, as it was bound to be with the grated apple in it.  I shall certainly be making this one again very soon although I think next time just a filling of lemon curd and a dusting of icing sugar might be enough without the cream, just like an apple Victoria sponge, which is what it is really.
4 comments: