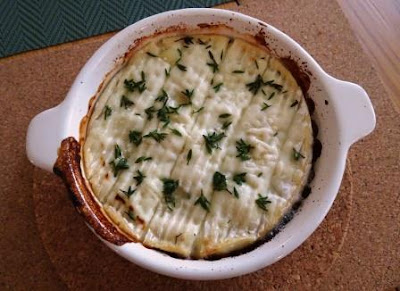 I have just spent a not-so-happy hour re-uploading pictures to various posts after either Google or Blogger threw a wobbly and decided not to display them.  Grrrr…..  The good thing about this is that in searching for the original photos I stumbled across a picture or two that were meant for other posts and were forgotten.  This one of those posts, better late than never. 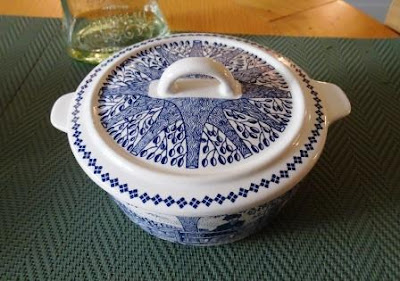 Now I realise that baked camembert is hardly a radically new idea and that the whole world and their grandmothers have been baking the stuff for decades.  I/we never had - until we received this delightful little pot from Nick's sister as a Christmas present.  I think that one of the reasons I/we had not baked Camembert before, apart from not having the right pot, is that we felt it was essentially "bad for us". 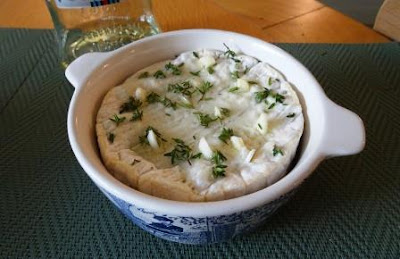 Of course I also realise that you don't need a special pot to bake a Camembert.  Other people have served it to us baked in its own little wooden box topped with tinfoil or in other everyday pots lined with tinfoil.  So it wasn't not having the pot that deterred us in the past -  it was the thought of all that yummy, gooey baked cheese - far too delicious to be good for us!
However, the pot was irresistible and came with a couple of tempting recipes so we threw caution (and our diets) to the wind and had a go. 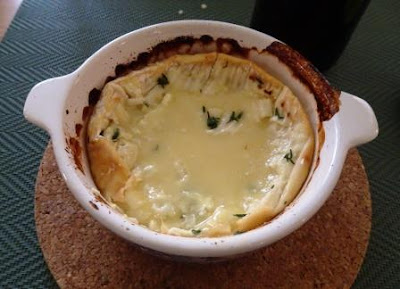 We served it the last time we had a guest round for dinner (which seems an awfully long time ago now) and even with the best will in the world the three of us could not eat our way through a whole Camembert so there was a good half of it left over.  That's when I discovered that it's also delicious when cold and re-solidified.  I dare say that's no surprise to most people either!  We had chunks of it in salads or stirred into in a dish of potatoes. (Also just stolen from the fridge when nobody was looking for no other reason than because we could.)  The last bit of it went into a quiche.
Ingredients
1 normal sized Camembert (the one that's about 10cm or 4" dia)
1 clove of garlic, peeled and sliced
1 tblsp Vermouth (or dry white wine)
1 tsp of fresh thyme leaves (or sprigs of rosemary)
Method
Preheat the oven to 200C / 180 fan / gas mk 6.
Unwrap the Camembert and place it in the baking pot.  Make small slashes in the top and push a slice of garlic into each hole.  Pour the Vermouth over and sprinkle with the thyme.
Put the lid on the pot and bake for 20 minutes or until molten.  Serve hot with French bread, or breadsticks.
Serves at least 4 people.

more of the same faff factor *, savouries, the virus