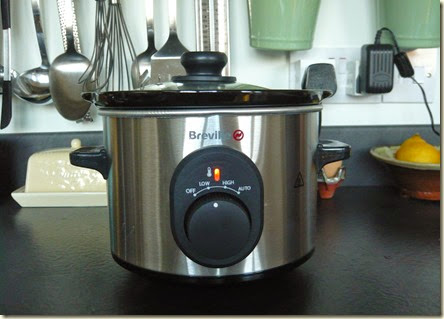 We are great fans of our slow cooker and use it regularly, but it has often struck me that it’s a bit too big for just the two of us, creating leftovers that we have to either be inventive with or waste.

Breezing through Sainsbury’s recently I spotted a mini slow cooker, 1.5 litres, and thought that for £16.99 it was worth a try.  When I unpacked it I wondered if I had dropped a clanger as it looked a bit smaller than I expected.  I wondered how useful it might be after all but spotted a recipe for pot roast beef in the booklet that came with it so decided to have a go. 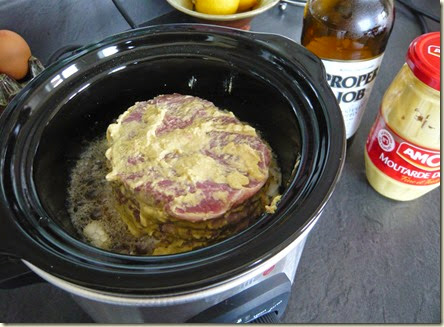 Essentially you coat the beef in a paste of mustard and flour, add beer to the pot and cook for several hours. 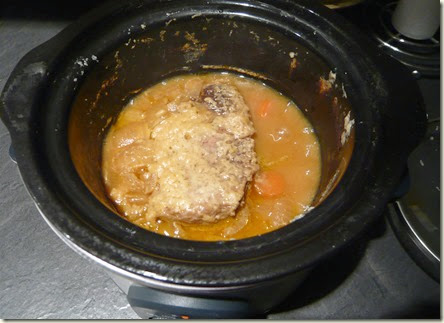 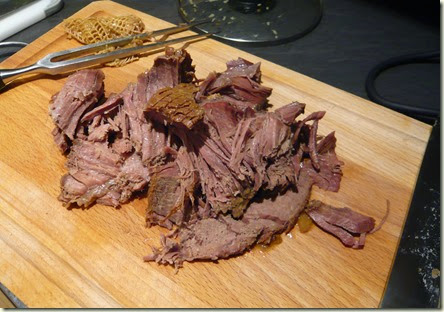 The recipe was for brisket but we used topside as we had already bought one of those large joints at a special price in the supermarket, intending to cut it into portions and freeze it.

It was a huge success.  The beef was tender and tasty, with a delicious sauce.  We served it with the veg from the pot, some greens and mashed potatoes.  There was ample for two people with just a few leftovers for a sandwich the next day.

The slow cooker appears to be perfect for a meal for two.  It seems to heat up quickly and bubble away nicely, ensuring food is cooked in the suggested time – not requiring anywhere near as long as the larger model for food to be properly cooked.  I think we’re going to enjoy this particular kitchen gadget very much indeed.

Since making the beef pot roast I have also made a delicious rabbit stew and a rice pudding in the cooker – more about them later!

a 750g piece of topside or brisket of beef

Put the prepared onion and carrot in the cooking pot.

Mix the flour and mustard to a thick paste and using your hands rub it all over the beef.  Place the meat on top of the vegetables.

Pour the beer over the beef – add more than stated if necessary so that the liquid comes to about half way up the joint.

Season with salt and pepper, cover with the lid and cook on high for 3 hours.  Reduce to low and cook for a further three hours.  (The machine has an auto setting which will start on high and reduce to low automatically.)

Serve the beef with the sauce from the pot and more vegetables of your choice.