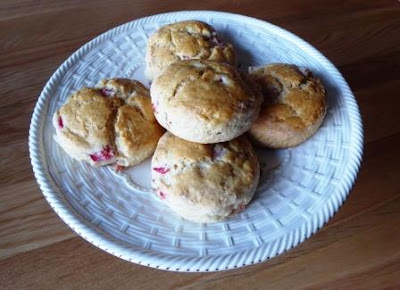 I have a bit of a thing about scones.  They usually turn out like rocks.  Not rock cakes, which are edible, but rocks, which are not.  Consequently I have had so many disasters with baking scones in the past that I have more or less given up and haven't made any since my Victoria scones in 2012.  That's seven scone-free years. 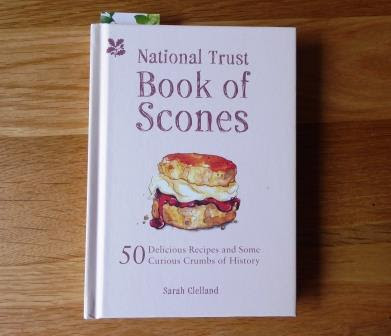 However, the CCC Facebook group seem to have gone bonkers over scones, ever since someone spotted the National Trust Book of Scones appearing for sale at a bargain price on some website or other.  The offer was too good to miss and for only £2.99 including postage I decided to risk a punt.  With the gauntlet thrown and feeling there was a fair wind around the corner I decided to have another go.
The thing that spurred me on to actually baking some scones (as opposed to just reading about them) is that the book, written by someone initially as a scone-eating tour of National Trust properties, has a page for Hardwick Hall, a NT property that is just down the road from where we live.  The Hardwick Hall page is opposite a recipe for rhubarb and ginger scones, which I thought was an amazing coincidence.  When we visited the hall last summer and had tea and scones in the tea room, we had rhubarb and ginger scones which were delicious.  And here I was with some lovely Yorkshire pink rhubarb in stock and a new book in front of me.  With all the stars aligned I decided that this was the best sign ever that I might actually be able to conquer my scone nemesis. 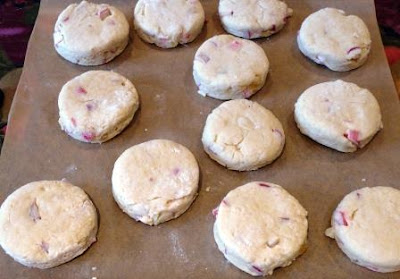 I took more care than usual in gathering together the ingredients.  I rather complicated matters by deciding to halve the recipe quantities as it was for ten huge scones.  In actual fact, having made the upside down cake, I only had enough rhubarb left for a half measure - and there was always the outside chance that they would turn out like granite again and a waste of all the ingredients.  Consequently I actually found myself feeling nervous as I checked and double checked the recipe.  I even rubbed the butter into the flour by hand instead of blitzing it in my food processor, and bought whole milk instead of semi-skimmed. 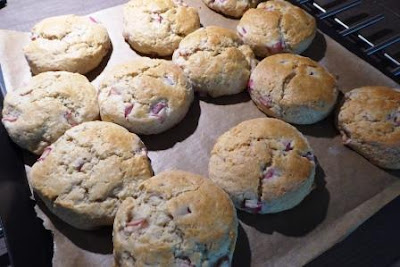 I have to say that for me they were a great success.  Probably not the best scones ever baked on the planet but they were light and fluffy, and very tasty.  Delicious slightly warm with butter and rhubarb jam.  I am dead chuffed and although I don't see my scone phobia as banished completely, I'm definitely on the road to recovery.
Ingredients (half of the quantities in the original recipe)
375g self raising flour
1/4 tsp baking powder
93g caster sugar
93g butter, cubed
100g rhubarb, peeled, and cut into small dice
1/2 a piece of stem ginger from a jar, chopped into very small dice
150ml whole milk
Method
Preheat the oven to 190 C and line a baking sheet with baking paper.
Sift the flour, sugar and baking powder into a bowl and rub in the butter until you get fine breadcrumbs.  Add the fruit and ginger and about 2/3 of the milk until you get a soft, slightly wet dough,  adding a little more milk as needed.
Turn out onto a floured surface and roll out to 3-4 cm thick.  Cut into rounds using a 6cm cutter, place spaced well apart on the baking sheet and brush the tops with milk.
Put the scones in the oven and immediately reduce the temperature to 180C.  Bake for about 20 minutes until risen and golden.  Serve warm with butter or clotted cream and jam.
Makes 12 scones.