I am fond of beetroot, always have been, even when it’s served up pickled in vinegar with a ham salad or in a cheese sandwich on sliced white bread.  Pickled beetroot attracts scorn and mockery these days, having gone out of fashion, rather like sherry trifle and black forest gateau did a while ago.  I’m fond of them, too. 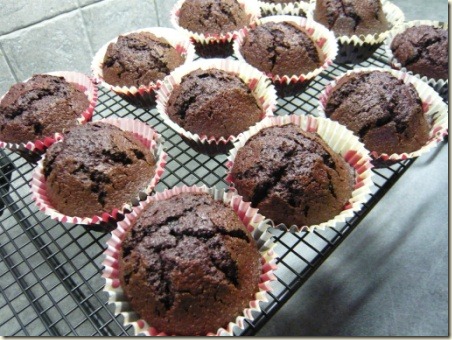 Anyway, I borrowed a book from the library last week.  It was the motorcycle on the cover that caught my attention and I confess I had never heard of Simon Rimmer before.  Since then I have discovered that he is on the telly every weekend, which just goes to show how much TV I watch at the weekend. 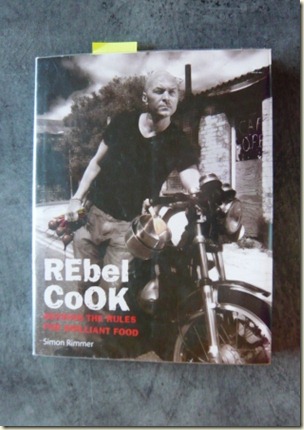 Anyway, in the book I found an interesting recipe for beetroot and chocolate muffins.  In fact the book is stuffed full of interesting recipes.  So much so that having borrowed it from the library twice I decided I couldn’t live without it and managed to track down a copy for myself, thanks to my old friend Amazon. 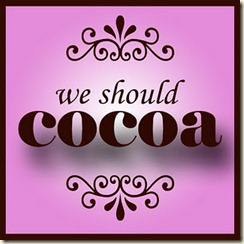 Beetroot is enjoying a lot of good press lately, now being apparently “very good for you”  so it occurred to me that the muffins would fit very well into the January we should cocoa challenge being hosted by Chele of Chocolate Teapot blog.  The idea is to make something chocolaty but also healthy after all the indulgences of the festive season. 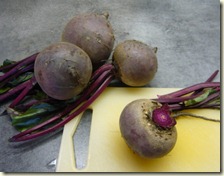 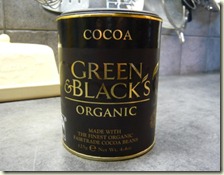 First you have to roast the beetroot, after which it looks rather wrinkly and unappetising but I must say that since we discovered the delights of roasted beetroot last year and found it to be delicious, we have been eating quite a lot of it.  I did find that my beetroot took a lot longer to cook than the 30 minutes stated in the recipe, so I have included that in the instructions below. 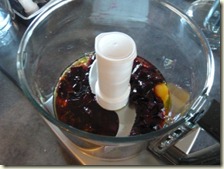 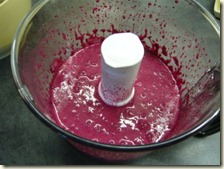 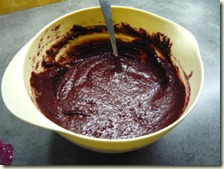 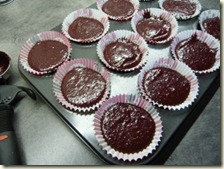 As always, the muffins are quick and easy to make.  You mix the dry ingredients together in a large bowl, blitz the beetroot with the eggs and oil in a liquidiser, mix together and bake.

The pink of the blitzed beetroot combined with the darkness of the cocoa produced an astonishingly purple mixture which looked gorgeous.  Mind you, the spillages in the kitchen did look like we had suffered a visit from the local axe murderer. 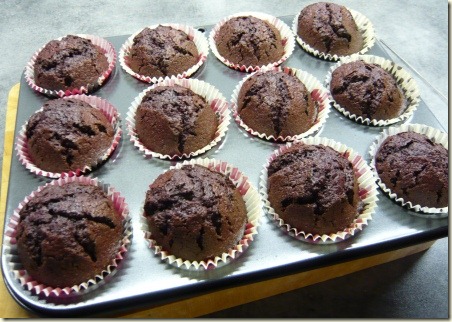 They turned out beautifully.  There was a distinct purple tint to them but apart from a hint of slight earthiness I would defy anyone to identify the mystery ingredient as beetroot, if they didn’t already know. 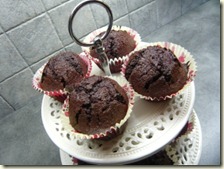 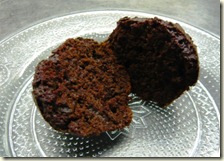 The flavour and the texture were fabulous and they came out of the paper cases in one piece – I hate it when a third of my muffin is left stuck to the case and you have to scrape it off. 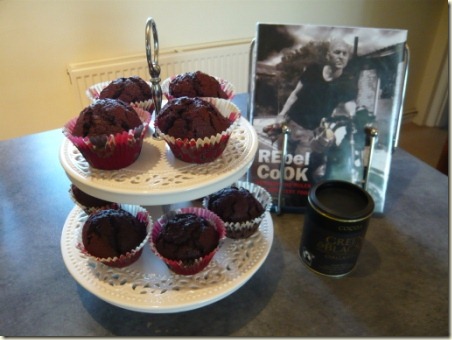 So I shall definitely be making these again – they were well worth the investment of more than half of my tub of Green and Black’s cocoa powder.  And I’m sure that apart from lowering your blood pressure, if you ate enough of them you would probably get one of your five-a-day, too !!

Wash the beetroot and remove the stalks, wrap loosely in foil, place in a roasting tin and cook in the oven for 30 minutes.  (I must add here that after 30 minutes my beetroot were still rock hard so I cooked them for an hour.)

Sift the flour, cocoa powder and baking powder into a large bowl.  Stir in the sugar.

Put the beetroot into a liquidiser/food processor with the oil and eggs and blitz until smooth.

Add the beetroot mixture to the dry ingredients, combine with minimum mixing and divide between the muffin cases.

*My mixture made 12 using slightly smaller muffin cases and they were done in 20 minutes.