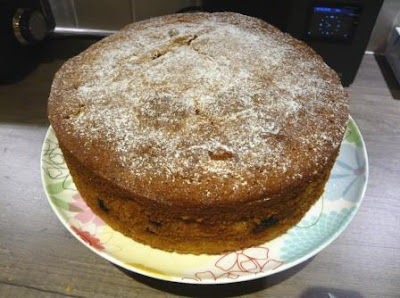 We often had Eccles cakes at home when I was a child.  A Saturday afternoon treat when Mum had been shopping in the morning, on the bus, and called at the baker's for four little cakes, one each.  She actually made excellent buns and tarts for us every weekend but in those days one from the baker's seemed more special.

Those Eccles cakes were about the size of a mince pie, made with flaky pastry, golden brown and sprinkled with sugar on top, filled with a sweet and sticky currant mixture.  They were impossible to eat tidily, inevitably producing a scattering of pastry crumbs and the odd escapee currant.  As for speaking with a mouthful..... 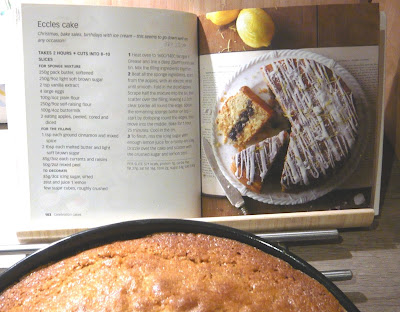 So when I saw a recipe for an Eccles cake in my little Good Food book I was intrigued.  There is no pastry but there is a layer of currants in the middle of what is basically an apple cake.  I had no idea that an Eccles cake could actually be made as a cake so was looking forward to have a go. 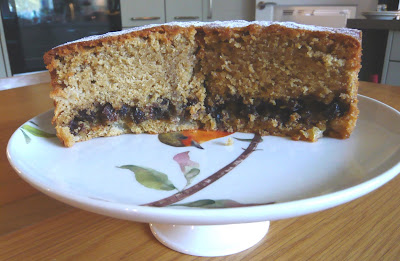 I was most disappointed to find that my currants sank to the bottom of the cake - not like the picture in the book where they are nicely in the middle - harrumph !! 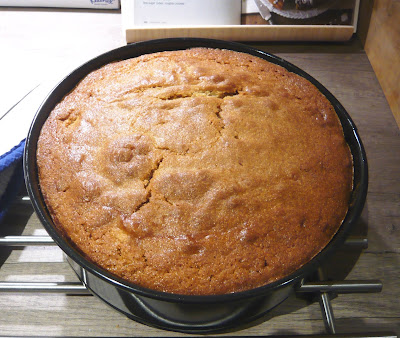 The other odd thing is that the quantity of mixture was actually way too much for the size of tin stated.  I merrily poured all of it into the tin and vaguely thought "that looks a bit full" as I put it in the oven.  I rechecked the recipe and that I had used the right size of tin, which I had.  Minutes later it looked like it was going to overflow - eek!  Luckily it stopped at the top but it did take a bit longer than stated to bake.

It also took a long time to cool and with guests arriving I didn't have time to drizzle the lemon icing over it prettily as in the book so it had to do with a dusting of icing sugar instead.

It was yummy!  Next time I might try adding a little flour to the currant filling to see if that stops it sinking.  And I will definitely be making it again but using a larger tin - 23cm instead of 20cm.

You can see the recipe here on the Good Food website, or on page 102 of "Easy Baking Recipes" in the Good Food series, in the "celebration cake" section, sandwiched oddly between rose and almond cupcakes and red velvet cake.  A thorn between two roses perhaps.

Put all the filling ingredients into a small bowl and mix together.  Set aside.

Put all the cake ingredients apart from the apples into a large bowl and beat together with an electric whisk until smooth.  Fold in the diced apples.

Put roughly half of the mixture into the tin and level the top.  Scatter the filling over the top, leaving a clear border of about 2-3 cm all the way round the edge.

Spoon the remaining mixture carefully over the top.  Start by plopping spoonfuls around the edge of the tin and gradually fill in the middle, so as not to disturb the filling.  Level the top and bake for 1 hour and 25 minutes or until done.  Cool in the tin.

To ice the cake, mix the icing sugar with enough lemon juice to make a runny icing (about the consistency of single cream).  Drizzle over the cake with a spoon and sprinkle the crushed sugar cubes and lemon zest over the top.

* Buttermilk was not available in my local supermarket so I made my own by adding 1/2 tsp lemon juice to 125 ml milk.  Stir well and leave to stand for 5 minutes before using.  (As per a tip on Nigella's website.)

** On the website the zest of 1 lemon is added to the filling ingredients.  I'll try this next time.