We were recently entertained by our friends Raphael and Veronique, who come from France and are living in England for a while. He is from Marseilles, she is from Lyon. They cooked for us a delicious meal of DAUBE D’ AGNEAU.

This is a casserole of lamb with olives and tomatoes and also flavoured with oranges.

Vero sent me a scan of the recipe she used as I really fancied having a go at cooking it myself. I Googled it and found that you can also have DAUBE DE BOEUF. That was lucky as I happened to have some braising steak in the fridge.

Unfortunately, all the recipes I found for Daube de boeuf on the internet suggested marinating the beef for at least 12 hours, some suggested for two days !! That was not going to happen as we were to be having it for dinner that evening, in less than three hours. So I decided to do it my way. The usual way of chucking everything in the pot and shoving it in the oven. 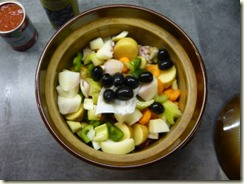 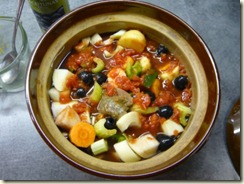 I just cut the meat into large chunks, peeled the veg and added them in large chunks, chucked in a tin of tomatoes, some olives and wine. I didn’t brown the meat or veg and I didn’t have an orange so I put in some orange juice. 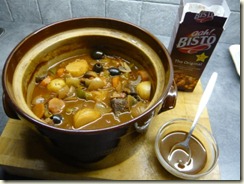 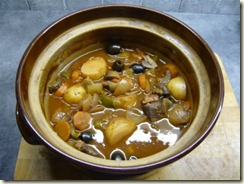 After about an hour or so I thickened it with some Bisto and it was delicious. 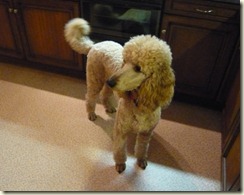 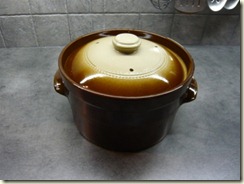 I was also very pleased with the stew pot. A recent purchase from the charity shop for £3.50.

You can’t really call it Daube de Boeuf so I call it FRIDGE STEW as I put in a selection of everything there was in the fridge. (It’s very similar to RANDOM HOTPOT, another favourite dish of this house.) The next time I make Daube de Boeuf (or agneau) I promise to plan ahead and do it properly.

Here’s my recipe for FRIDGE STEW

Put the beef in a large casserole dish or stewpot.

Cut all the vegetables into large chunks and pile them on top of the meat.

Crumble the Oxo cube on top and then add enough boiling water to almost cover everything – don’t drown it. Season with salt and pepper and add the bouquet garni. Give it a good stir.

Cover and cook in the oven for about 1½ hours.

Remove from the oven, stir and thicken with 2-3 teaspoons of Bisto, dissolved in water. Return to the oven for about 30 more minutes, or until all the vegetables are meltingly tender.