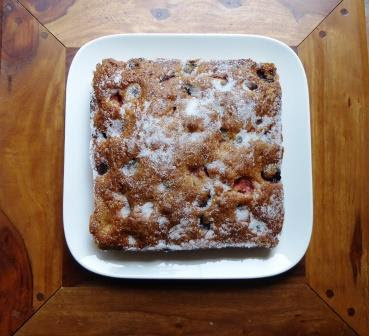 The theme of our recent cake and bake club meeting was "on trend or vintage" and when I was wondering what to make I remembered this recipe for "frozen fruit cake".  It appeared some time ago in the blog written by Mary-Anne Boermans, a previous GBBO contestant, called "Time to cook online".
Mary-Anne has a passion for old recipes and this one apparently dates back to the 1930's.  The beauty of it is that you can use virtually any fruit at all, fresh, tinned or frozen, making it very versatile and friendly and exactly my cup of tea. 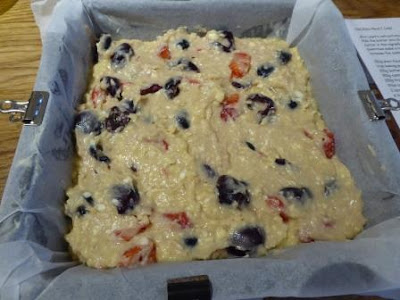 The cake mixture is made using the rubbed in method.  Half of it is spread over the bottom of the tin, then the fruit is mixed into the other half before spreading the mixture on top.  The idea is that this prevents all of the fruit from sinking to the bottom during cooking and it worked! 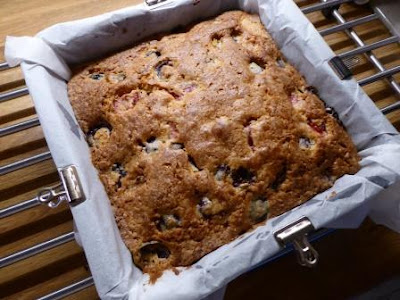 The cake had a firmish texture, ideal as a traybake for picnics etc.  I put fresh fruit in mine, using up what I had in the fridge, so it was a mixture of strawberries, cherries and blueberries.  It's not a show stopper or a great party cake but a good way of using up mixed fruit from the fruit bowl or freezer.  Nice with a cup of tea in the afternoon.   Thinking about it, there were not really "showstopper cakes" around in the 1930's.  Between the wars most people would have been thrilled and grateful to have any kind of cake on the tea table and you certainly would not have seen the glamorous cakes we get nowadays, not in ordinary households anyway.  You can see the recipe here. and it cuts into about 12 pieces. 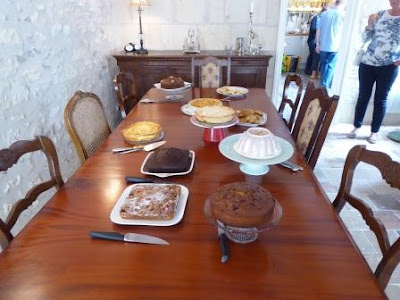 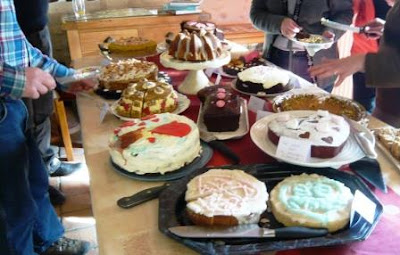 CCC club meeting February 2016.
The cake club has evolved into something I'm not too sure about.  We used to have a very successful branch of the Clandestine Cake Club in the Loire Valley, attracting lots of people and beautiful cakes at every meeting.  When the CCC folded the members decided they would like to continue with meetings but change to a "cake and bake" club (although most people still refer to it as "cake club").
At the last meeting there were only four cakes on the table, three of which were baked by us - me, Nick and my brother who was staying with us on holiday.
Amongst other things on the table there were three almost identical quiches, rock buns, biscuits and a chilled dessert.  All well made and very tasty but......for me there is nothing quite like the sight of a table full of gorgeous cakes.  The two pictures above serve to illustrate what I mean.
Cakes are special, a treat, a challenge to bake and beautiful to look at.  There is a sense of joy and achievement when you have baked a gorgeous cake and bring it out for everyone to feast their eyes on and taste a slice.  I'm not sure you can say the same about a quiche, even a very nice quiche.  In my mind the club was not started so that people could bring the everyday things they bake for tea.
Hey ho.  You can read more about it here.