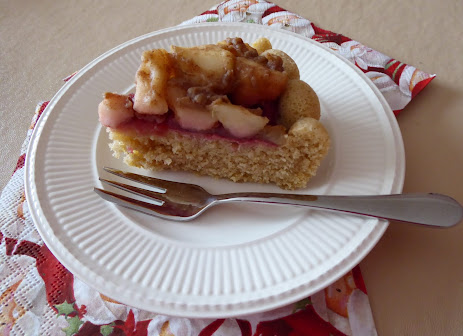 I baked this cake because I was keen to use the lovely new Nordic Ware cake tin that my brother had given me for my birthday. 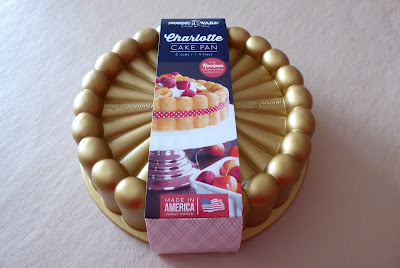 The idea is that the cake baked in it looks like a classic "Charlotte" dessert. 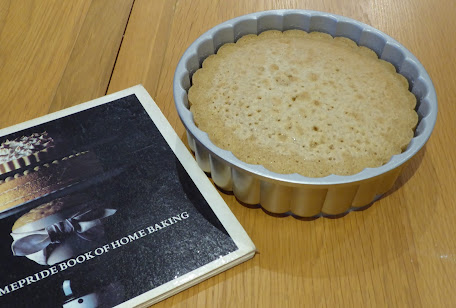 I looked on the internet for recipes using this tin and the only ones I could find were American ones using cup measurements.  There is in fact also a recipe on the slip cover of the tin, again using cups.
I have a bit of a thing about cup measurements, having had a couple of failures in the past.  Not quite disasters, just disappointing results.  I wondered if it was because using a cup is not as accurate as weighing in grams.  If flour, for example, has settled in the pack, box or jar, a cup of it will not weigh the same as if it was looser and the same with sugar.  In fact perhaps even more so with sugar.  In any case I tend to steer clear of recipes using cup measurements unless it states the quantities in grams as well.
So, I looked at the tin and thought it would probably be the right size for my all-time go-to all-in-one sponge recipe, the one in my ancient Homepride Flour Grader's recipe book from the 1970's.  Very early 70's in fact as it has a number of unused coupons inside where you could send off for extra copies at 13/6 each.  That's 13 shillings and 6 pence so pre decimal currency in the UK - ancient indeed.
How do other people get on with cup measurements? 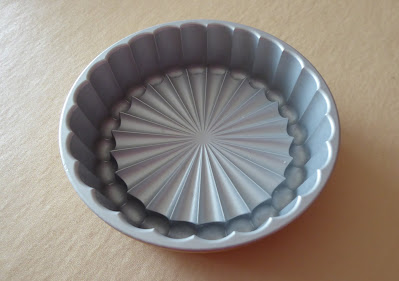 Getting my usual cake release paste into all the nooks and crannies was a bit fiddly and required a bit more patience than I normally devote to the task.  It was important to do it thoroughly otherwise the "sponge finger" effect would not have looked right if it had stuck. 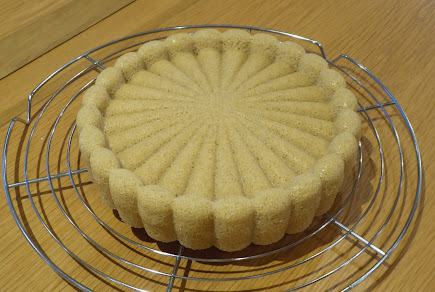 I went with the usual, 150g of everything and 3 eggs, sponge, flavoured with cinnamon.  I fancied using up some cooking apples and some leftover cranberry sauce and one of the recipes I spotted on the internet also added cinnamon which seemed like a good idea.  The quantity of mixture was just about right for the tin and it turned out beautifully. 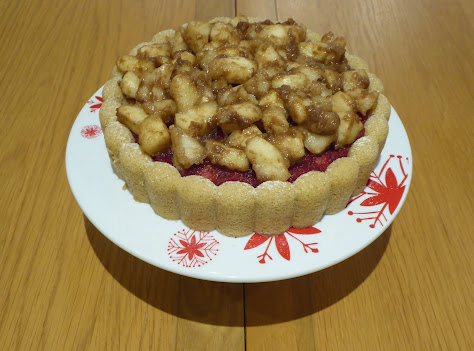 Of course, the end result using this tin is not really like a traditional charlotte dessert, which would have a shallow cake like base, sides built up of sponge fingers and a fairly deep filling of some kind of mousse.  It's more like an alternative to the old fashioned sponge flan, but with a deeper base.  Or even an alternative to an upside down cake.  But it looks the part, is fun to make and has endless possibilities. 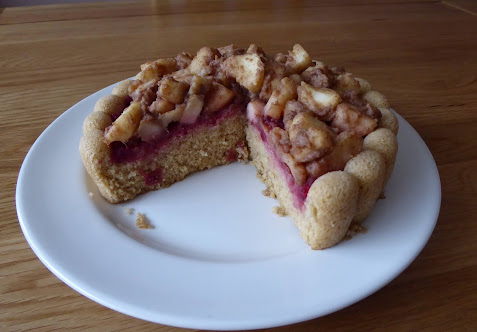 It turned out really well.  The sponge base was nicely flavoured with a hint of cinnamon, the caramelised apples were just sweet enough and the cranberry layer just tart enough.  Definitely a cake I would make again, although there is a huge temptation to experiment with other fillings first.  Well done little brother for giving me a very thoughtful, useful and delightful birthday present!
The cake was excellent served as a dessert with leftover brandy butter and cream.  It would also be good with custard or ice cream and is just as nice on its own with nothing else at all.  (Except maybe a cup of tea or coffee or, better still, a glass of sherry or sweet wine!  It is Christmas, after all!)
Ingredients
For the cake
150g self raising flour
150g softened butter or spread (I used Sainsbury's Buttersoft)
150g caster sugar
3 medium eggs
1 tsp ground cinnamon
For the fruit topping
2-3 tblsp cranberry sauce or jelly
2 large or 3 medium cooking apples
25g butter
1 tsp ground cinnamon
1 heaped tblsp light muscovado sugar
Method
Prepare the tin by buttering and flouring or using home made cake release paste (see side bar).  You can also use a standard 20cm round tin.  Preheat the oven to 160° C / 140° fan / gas mk 3.
To make the cake, put all the ingredients into a large bowl and beat together until smooth and well blended using an electric whisk (or use your brand new (ahem) Kenwood food mixer).  You could also just use a wooden spoon, as I did with this recipe for decades, as it beats together quite easily and quickly.
Spoon the mixture evenly into the prepared tin and level the top.  Tap a few times on the worktop to dislodge any air pockets.  Bake for 20-25 minutes until golden brown and firm.  Leave in the tin for 10 minutes then turn out onto a wire rack to cool completely.
While the cake is cooking prepare the apples.
Peel and core the apples and chop into large dice*.  Melt the butter in a medium saucepan, add the apples, sugar and cinnamon and cook gently, stirring often, until the dice are soft but holding their shape.  Set aside to cool.
When the cake is cool, spread the top with a thin smear of cranberry sauce or jelly.  Pile the diced apples on top.  Dust with icing sugar before serving.
Cuts into 10-12 slices.
* Apple slices would also look nice arranged on the top of the cake but they can break up when cooking in the saucepan.