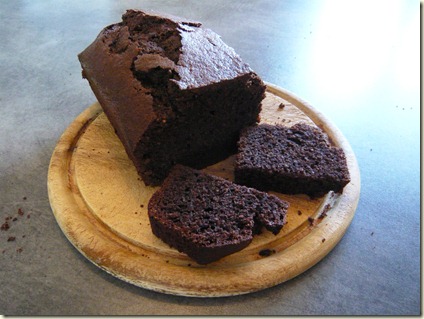 The magazines are full of Jubilee celebrations and recipes for garden parties at the moment.  I therefore thought it curious that in my Sainsbury’s magazine there should be a feature of recipes for a “Spanish picnic”.  Especially since one of the items on the menu was soup.  Chilled soup of course, but for a picinc ?! 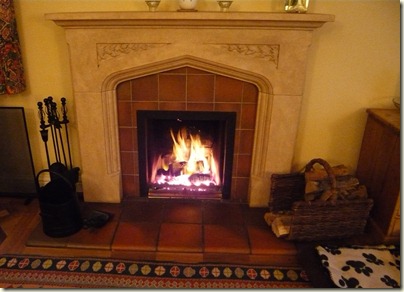 As May seems to have been one of the chilliest months of the year so far, we actually had an open fire going when I was flipping through the magazine.  Open fires are definitely the thing to cheer me up on a cold Saturday evening when I am stuck indoors seeing the light nights slip by because it is too wet or cold to be outside doing anything.  It would have to warm up an awful lot before this house held a garden party.

Anyway, one of the recipes in the “Spanish picnic” feature was for “Spanish chocolate cake”.  Presumably it was the orange, almonds and olive oil that qualified it for being Spanish.  I was on the lookout for something to make for this month’s We Should Cocoa challenge and my dad was off to his model engineering club the next day, so this would do nicely for him to take with him to go with a mug of tea with his mates. 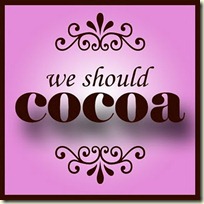 We Should Cocoa is the monthly baking challenge organised by Choclette of Chocolate Log blog and her new co-organiser, Laura of How to cook good food.  This month the idea was to include almonds with the chocolate so as a change from my usual flourless chocolate cake, the chocolate orange combination seemed just the thing. 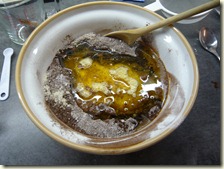 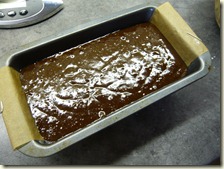 It was very quick to make.  The chocolate flavour comes from cocoa powder, not melted chocolate, which is a relief.  (Melting chocolate always makes me nervous, for some reason.) You just mix all the ingredients together and pour into a lined loaf tin.  It was a very glurpy and glossy mixture.  It took a long time to bake – over an hour. 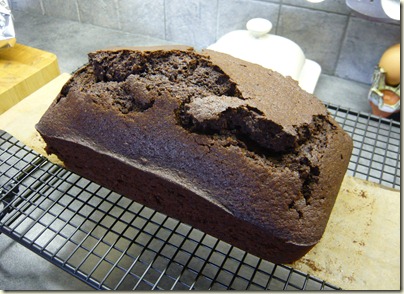 I had plans to decorate the top with drizzles of orange water icing and a scattering of those lovely orange flavoured chocolate buttons.   Part way through I realised this was not going to be possible.  The cake rose and cracked volcanically so unless I was trying to pass it off as a “Spanish mountain landscape with orange rivers and lakes” cake, the icing option was definitely not on.

In the instructions it said to cover the cake with a sheet of baking paper after 50 minutes.  I have tried this before with my fan oven and it doesn’t work – the paper tends to lift off.  So I wrapped the whole thing in a sheet of foil instead. 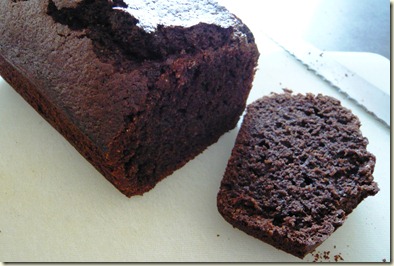 The cake was quite unlike anything I had baked recently.  It had a very close, even and grainy texture, possibly something like a Madeira cake, but a lovely chocolate and orange flavour.  It wouldn’t do as a glamorous centre piece for a special event but it would be perfect for a picnic, handed round in chunks along with a bowl of strawberries for people to dig into at the same time.

I gave most of it to my dad for his mates at the club but held back a few slices for “quality control”.  Three days later I remembered which box I had put them in and the cake was still beautifully moist and delicious.  If I ever need to go to a picnic or other event where I might want to hand around pieces of cake that won’t stick to your fingers or fall apart, and can be made a few days ahead, this will be the one.

the zest and juice of 1 large orange

Line a 1kg loaf tin with baking paper and brush with a little olive oil.  (I greased mine with butter as usual and it was fine.)

Sift the flour, cocoa powder, baking powder and salt into a large mixing bowl.  Stir in the ground almonds and sugar.  Make a well in the centre.

Beat the eggs.  Add to the bowl with the rest of the ingredients and mix well until thoroughly combined.

Pour the mixture in the oven and bake for a total of 60-70 minutes. BUT, after 50 minutes, remove the cake from the oven and wrap in a sheet of foil.

When the cake is cooked, remove from the tin and paper, and cool on wire rack.

Cuts into 12 slices or chunks and will keep for several days in an airtight container.