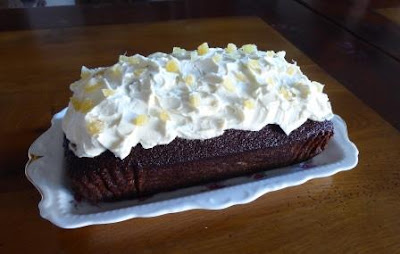 Nick made this cake for our Macmillan charity coffee morning.
Ginger cakes are his favourite both to eat and to bake and he's always on the lookout for something a bit different.  This recipe comes from a book called "Make, Bake and Celebrate" by Annie Rigg and it includes instructions for decorating the cake with slices of candied pineapple.  I confess that we did buy a pineapple but decided that making the candied slices was a faff too far.  (We ate the pineapple for dessert another day.)  Instead, Nick decorated it with chopped crystallised ginger. 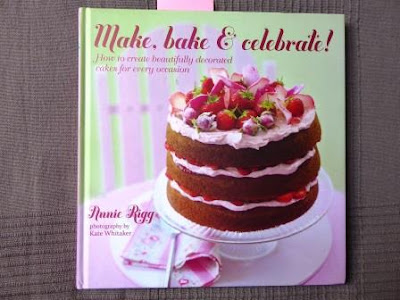 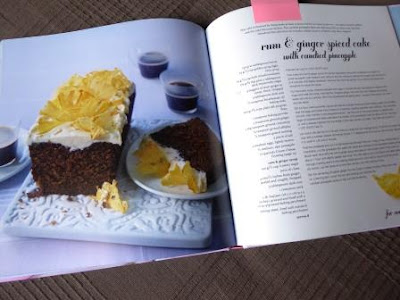 The cake was pretty faffy as it was, involving the making of a syrup and a cream cheese icing - the recipe for which was annoyingly on a different page (having to flip back and forth from one recipe to another is something I find very annoying).  In fact the recipe was exactly the kind of thing that Nick loves to get stuck into, remembering that he is a man who was prepared to caramelise carrots for a previous cake.  Myself, I just don't have the patience, always having a number of other things that need doing at the same time, such as ironing some jeans or hanging out the washing while the weather is good.  Nick has the knack of concentrating on one task at a time to the exclusion of all others.  (A well known male characteristic I suspect.) 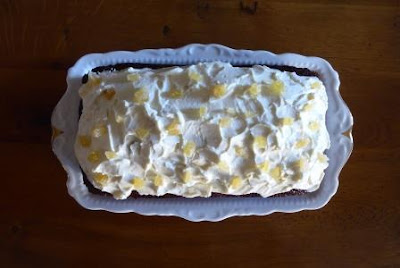 Regrettably, I completely forgot to take a picture of a slice of the cake.  It was delicious with a hint of rum and plenty of spice.  It had a nice, even crumb and kept well for a day or three (in the fridge because of the cream cheese icing).  It got plenty of praise at the coffee morning and, basking in all the attention, Nick said he would definitely make it again AND would tackle the candied pineapple to go with it.  Brave man.
Ingredients
For the syrup
* measure half of the syrup ingredients for one cake as these quantities provide enough syrup for baking the pineapple slices, which we didn't make. Alternatively the leftover syrup keeps well in the fridge for several days.
100g caster sugar
juice of 1 lime
4cm fresh ginger, peeled and roughly chopped
3 tblsp dark rum (we used spiced rum)
1 cinnamon stick
3 tblsp water
For the cake
150g butter
75g golden syrup
75g dark treacle
175g plus 2 tblsp dark muscovado sugar
3 balls stem ginger in syrup, finely chopped (half will be used for the frosting)
3 tblsp dark rum (we used spiced rum)
½ tsp bicarbonate of soda
100ml boiling water
200g plain flour
1 tsp baking powder
3 tsp ground ginger
1 large tsp ground cinnamon
¼ tsp ground allspice
¼ tsp grated nutmeg
pinch of salt
3 medium eggs, lightly beaten
For the cream cheese frosting
150g good quality full fat cream cheese
25g softened butter
1-1½ tblsp maple syrup (or you could use clear honey)
½ tsp vanilla extract
1 tblsp crystallised ginger, chopped for decoration (optional)
Method
First make the rum and ginger syrup by putting all the ingredients into a small saucepan over medium heat.  Bring to the boil, stirring to dissolve the sugar.  Simmer for 3-4 minutes until thickened (ours took much longer than this).  Remove from the heat and set aside to cool.
Preheat the oven to 170C / 150 fan / gas mk 3.  Grease and line a 900g loaf tin with baking parchment, or use a paper liner.
In another small saucepan, put the butter, golden syrup, treacle and sugar and heat gently until melted and dissolved.  Add half of the chopped ginger, the rum and boiling water and mix to combine.  Stir in the bicarb, which will cause the mixture to foam, and set aside.
Sift the dry ingredients into a large bowl and make a well in the middle.  Add the eggs and the syrup/butter mixture in thirds, beating well with each addition.  Stir well and pour into the prepared tin.  Tap the tin a few times on the worktop to release any large bubbles.  Bake for 45-50 minutes until done.
Leave the cake in the tin while you strain the rum and ginger syrup.  Prick the hot cake all over with a skewer and slowly drizzle 1-2 tblsp syrup over the top, letting it soak in.  Cool in the tin.
To make the cream cheese frosting, put the cheese and butter into a bowl and mix together until smooth.  Add the maple syrup or honey to taste.  Mix in the vanilla and the chopped ginger.
Turn the cake out onto a serving dish and spread the frosting over the top.  Sprinkle the chopped crystallised ginger over the frosting (if using).
Cuts into 8 - 10 slices.