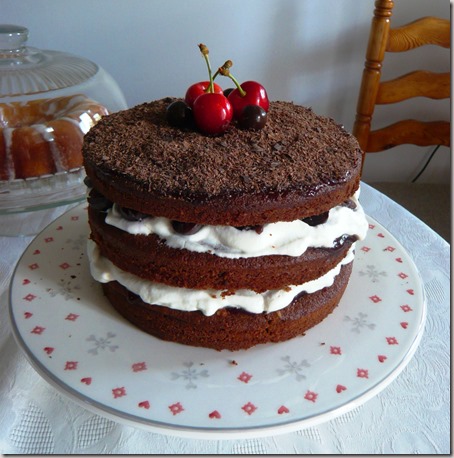 I have made more chocolate cakes than usual this year, for reasons that completely escape me.  Which is no bad thing because you can’t beat a nice chocolate cake and in fact for virtually a whole decade (in my thirties) the only two cakes I made regularly were a chocolate cake (for birthdays and other occasions) and the annual Christmas cake.

I look back on those years now with amazement.  How can my life have been so dull that only an occasional chocolate cake ever graced my table?  I do know the answer of course, I was busy doing other stuff, and dull it certainly wasn’t, working full time and scuba diving when I wasn’t working.  Looking back I can hardly think it was really me that did all that.  Now that I am retired I can hardly remember ever going to work, as if it was a bad dream for forty years.  As for scuba diving, I wonder who that woman was that I used to be, that lived and breathed underwater swimming for nearly fifteen years.  Crikey.  How things change.  I gave up sub aqua when I reached forty and took up motorcycling instead.  Now I bake and still ride my Harley.  Hey ho.

I made this cake for the very last Loire Valley CCC meeting where the theme was European cakes.  I had been hankering after making a Black Forest Gateau for a while, having a fascination for things retro, and this was the perfect opportunity to get it out of my system. 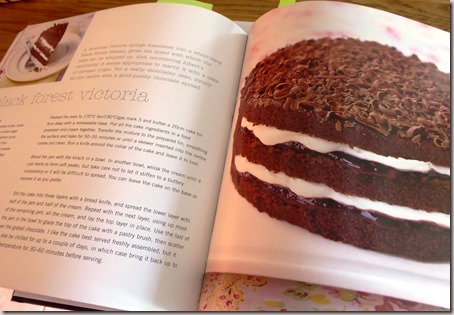 The recipe comes from one of my favourite cook books, “Gorgeous Cakes” by Annie Bell.  I have made several cakes from this book, all have been a great success and turned out more or less as they should have.  You can’t expect more than that from any cook book I think.

This one is described as a Black Forest Victoria and is a variation on the famous sponge cake recipe.  It was very good.  I filled it with cherry jam and cream, plus a few black cherries (from a tin) between the layers of sponge.  I decorated it with a few fresh cherries from our own cherry tree in our French garden and added a few chocolate coated raspberries just because I had the packet open.  I will be making it again – probably for dessert when we have prawn cocktail for starters and chicken chasseur for mains.

Put all the cake ingredients into a food processor and blitz until smooth and well blended.  Divide the mixture equally between the three tins and bake for 20-30 minutes until done.  Remove the cakes from the tins and cool on a wire rack.

For the filling, blend the jam with the Kirsch and set aside.  Whisk the cream until spreadable (not too stiff).

Spread one of the cooled cakes generously with cherry jam and then with half of the whipped cream.  Push a few black cherries into the cream and put another cake on top.  Repeat and add the last cake.  Spread it thinly with cherry jam and sprinkle the grated chocolate over the top.  Add a few fresh cherries and other suitable decorations as you like.

Keep in the fridge and bring up to room temperature before serving.

GINGER AND APRICOT CAKE and how a new garden led to a new cake stand. 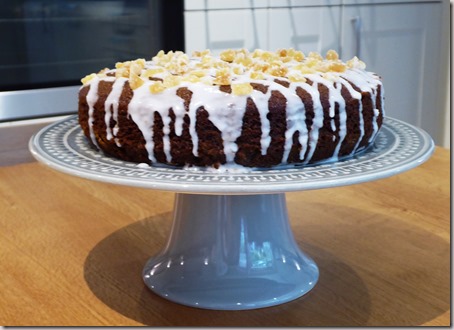 We are spending August in the UK because we needed a new garden. 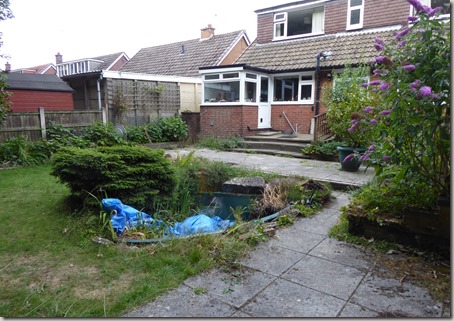 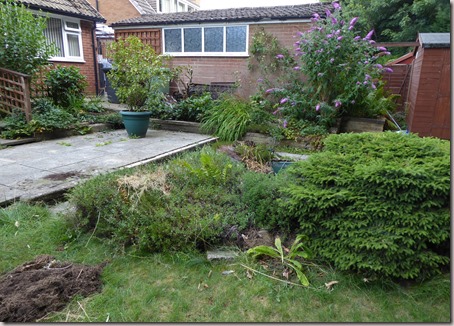 You may remember that last year we re-upsized our UK home (having downsized in 2014) and bought a 1960’s bungalow that needed a lot of work to bring it up to date.  We spent most of the winter having new doors and windows, a new kitchen, a new drive, new plumbing, new staircase, carpets and decorating.  Then we anguished over what to do with the back garden.

It was a mess of worn out patio tiles, hugely overgrown shrubs, little paths, low crumbling walls and a leaking pond.  We came to the conclusion that it would take us months of work if we tried to sort it out ourselves and in fact hardly any of it was worth saving.  What we needed was a very low maintenance garden so that we could spend our summers in France not worrying about it. 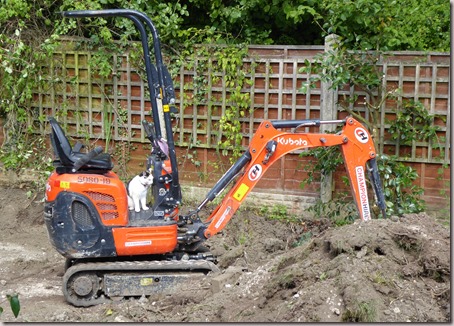 The company that did the front drive do that kind of work so we hired them to start at the beginning of August, that being the best chance of a dry month to get it done.  By the end of day one they had turned what was a mess into a wasteland, much to the disgust of our cat Daisy, who was wondering where her adventure playground had gone. 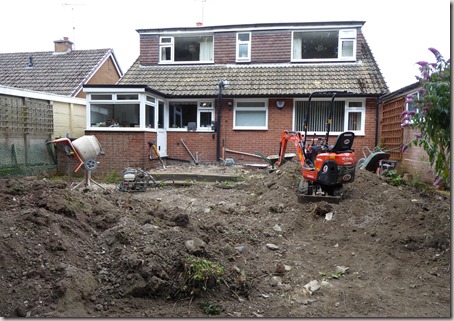 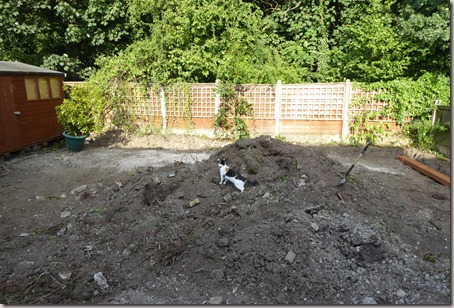 Gradually all the garden features were demolished, scooped up and removed but this process is extremely time consuming, messy, noisy and disruptive.  After three days I could stand it no longer and had to get away from the house.  We opted for a trip to Waitrose.  (We needed some shopping anyway.)

Our nearest Waitrose is an hour away so we only make pilgrimages a few times a year.  Compared to our local Tesco it’s such a peaceful, calm and civilised environment with nice staff and nice customers.  A visit there usually restores my faith in human nature and we come away refreshed and with something a bit different. 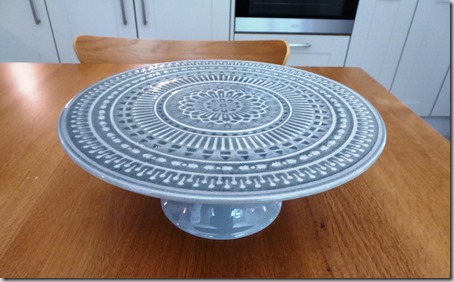 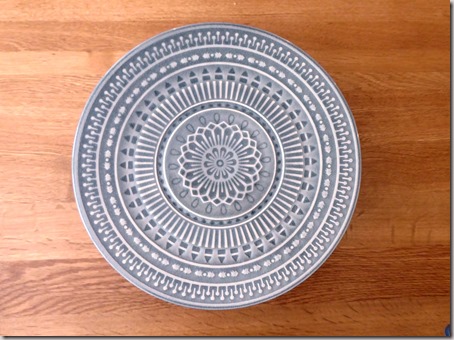 It was there that I spotted and fell in love with this cake stand to add to my collection.  The collection is now so huge that we are having to operate a one in, one out, policy.  Nobody in their right mind needs as many cake stands as I have but I found that if I owned up to my obsession and called it a “collection” it didn’t seem so weird.  The problem is that we are, frankly, running out of space to display them.  Even I realise that there is not much point in having them if they’re simply hidden away in a cupboard.  This one, however, matches the colour of my new kitchen just perfectly…… 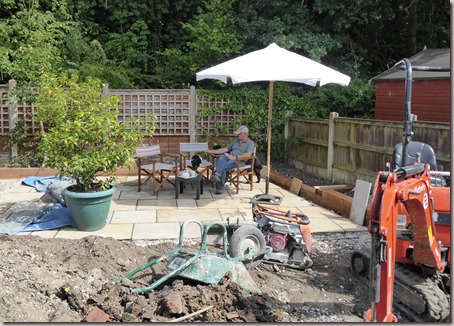 The garden is taking shape.  When the contractor proposed the design I couldn’t really visualise what it would look like but as each painful day passes and a little more is done, I can see what the end result will be. 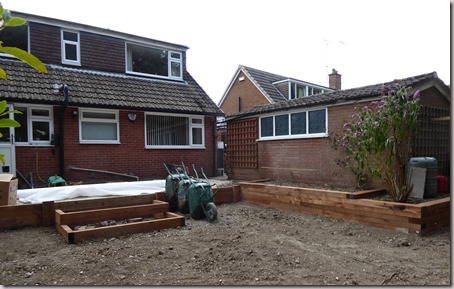 We will have a nice, modern, easy to look after garden that will not go rampant when we are not around to look after it all summer. 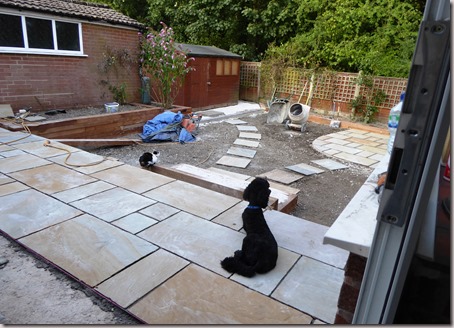 Daisy and Hugo are still mystified and I suspect they liked the old garden better.  At the end of each day’s work they inspect the progress. 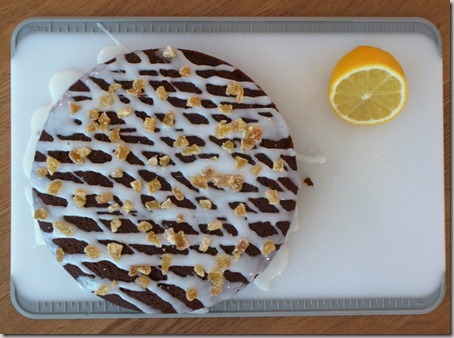 A new cake stand deserves a nice cake to go on it and as I have mentioned before, Nick is not that fond of cake.  Ginger cake is on the very short list of cakes that he likes. 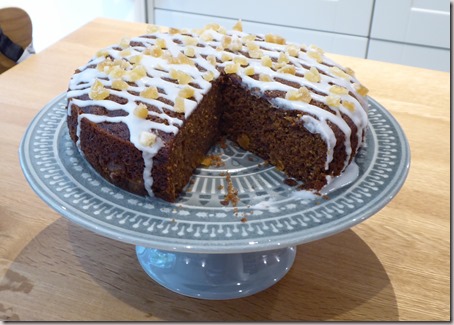 The recipe comes from a little book published by Delicious magazine, simply called “Baking”.  As per usual, I didn’t have all the required ingredients in stock so improvised a bit, the major difference being to put apricots in it instead of prunes, although I think prunes would have been really nice (if I had had any).  It was moist with a close and even texture and just the right amount of spice, enhanced by the crystallised ginger pieces on top.  The little morsels of chopped dried apricots added a nice chewy element.  Delicious it was.

a few pieces of crystallised ginger, chopped small, to decorate

Put the butter, sugar and syrup into a small saucepan and heat gently to melt together, stirring all the time.  Stir in the milk and set aside to cool.

Sift the flour, bicarb and spices into a large bowl and make a well in the middle.

Stir the beaten egg into the sugar and butter mixture then pour into the flour.  Add the chopped apricots and mix well to combine.

Pour into the tin and bake for 50 minutes or until done.  Cool in the tin.

When the cake is cool, remove from the tin and place on a board.  Sift the icing sugar into a small bowl and mix with enough lemon juice to make a runny icing.  Drizzle over the cake in any pattern you like, scatter the crystallised ginger pieces over the top and transfer to your favourite cake stand.

Cuts into 10 – 12 slices and, like most ginger cakes, keeps well for several days in an airtight tin.