I have been exploring the depths of my freezer, trying to use up foods that need using up, and throwing out things that have been around a little too long.  All this to make way for the inevitable excess of vegetables from the garden later in the year, the windfalls and hedgerow finds that come our way, and some of the very handy “buy one, get one free” offers that turn up in the shops.

Last weekend my rummaging unearthed several packs of ready-made pastry of all kinds, so I picked out the oldest one - a pack of shortcrust.  I also took out a box of stewed cooking apples (made from the apples left in a wheelbarrow by the farm gate every year), and a small bag of strawberries which were probably the result of a raid on the reduced basket in the supermarket at some stage. 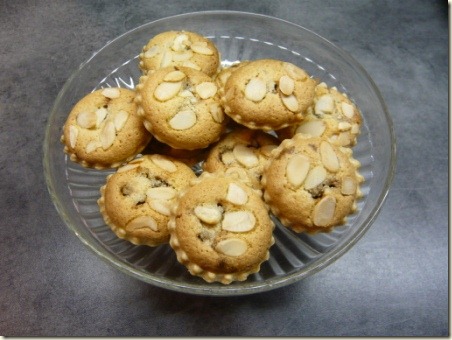 Out of that lot I decided to make some almond mincemeat tarts, a couple of chicken, leek and mushroom pies for my dad and a fruit tart for our Sunday dinner (plus a small one for my dad of course). 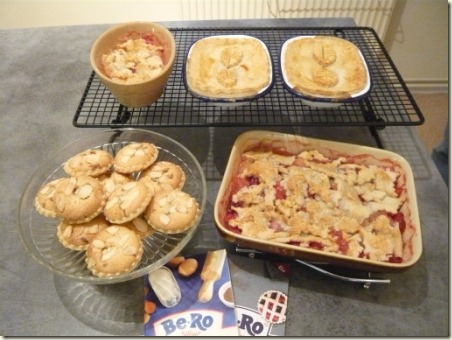 The little tarts were inspired by a blog post by Snowy which you can read here.  Her recipe reminded me very much of tarts that my mum always used to make using a recipe from her only cookbook, the Be-Ro book.  Although they were called macaroons they were nothing like what we think of as macaroons nowadays.

There is a new edition of the book out, the 41st edition, and I sent for one a while ago using the details on a pack of Be-Ro flour.  I was disappointed with it when it came.  A lot of the old recipes that were my favourites and my mother’s have gone, such as the macaroons, which is a shame.  Luckily for me I have a collection of Be-Ro books covering several decades so I have all the recipes, but new bakers would miss out on them. 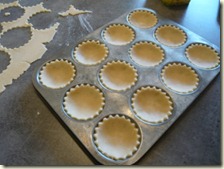 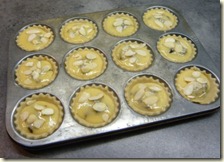 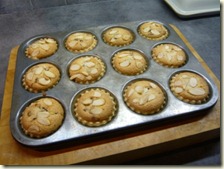 My mum always made these tarts with strawberry jam but I used the remains of a jar of mincemeat (just like Snowy did) and they were lovely – a real old fashioned teatime treat. 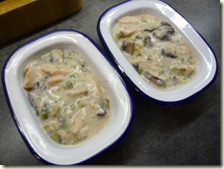 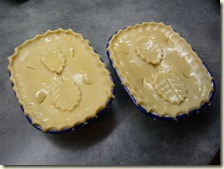 For the chicken pies I used an “emergency” tin of chicken in white sauce which was lurking at the back of the kitchen cupboard and added a few mushrooms sautéed with a sliced leek.  They looked nice when they were done and my dad reports that they are very tasty – one down, one to go !!  (I didn’t confess that the chicken came out of a tin.)

The question is, what do you do with your pastry trimmings?  Do you end up throwing bits away? 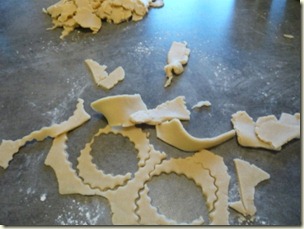 I usually screw mine into little balls and bake them for the dog.  Sometimes if I can’t be bothered with that, I throw them away.  Then I spotted a recipe in The Hairy Bikers “Perfect Pies” that suggests you open freeze them (which means spread them out on a tray and put them in the freezer to harden), then put them in boxes and store them to use for future use. 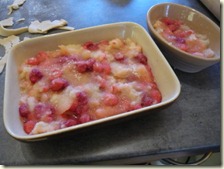 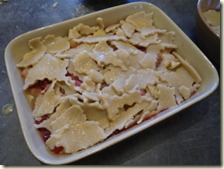 You put your chosen fruit in a suitable sized dish, sweeten to taste, scatter the pastry bits in a jumble over the top and bake.  I gave mine an egg wash and a sprinkling of sugar and it looked lovely – a lovely jumble of fruit inside and a jumble of pastry on top.  In fact I will call it jumblefruit pie.  A great success and apologies to the dog but the pastry bits are going in the freezer from now on !! 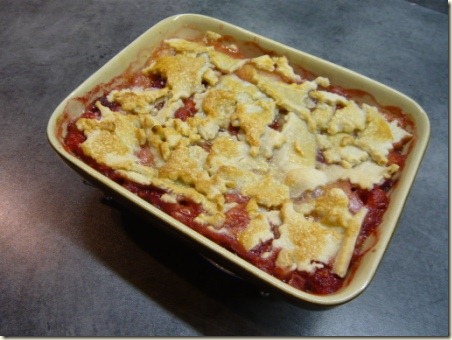 The pie was delicious.  The topping was lighter than a full pastry crust or even a crumble.  I used apples and strawberries, but I’m sure it would work perfectly well with any fruit that you would normally make a pie or crumble from, such as rhubarb, plum, gooseberry, blackberry……..I shall certainly be making this again.

Here’s my version of mincemeat almond tarts, based on the Be-Ro recipe for macaroons.

a handful of flaked almonds

Roll out the pastry thinly and cut 12 circles for the tarts.  Put a meagre teaspoonful of mincemeat in each tart.

In a small bowl mix together the sugar, egg and ground almonds to a soft mixture.  Dollop a teaspoonful on top of the mincemeat in each tart.  Sprinkle a few almond flakes on top.

Bake for 15-20 minutes or until golden brown.  Allow to cool for 5 minutes in the tin then transfer to a rack.

Here’s my version of the jumblefruit pie.

For an apple and strawberry pie, put cooked apple slices and fresh or frozen strawberries in an ovenproof dish of the appropriate size for the amount of fruit.  Sprinkle enough sugar on top to sweeten to taste.

Scatter frozen pastry trimmings in a single layer on top of the fruit.  Brush with beaten egg and sprinkle with a little more sugar.  Bake for 25-30 minutes until the fruit is bubbling and the pastry is golden brown.

Serve warm.  The pie will serve 4-8 people depending on how large you make it !!