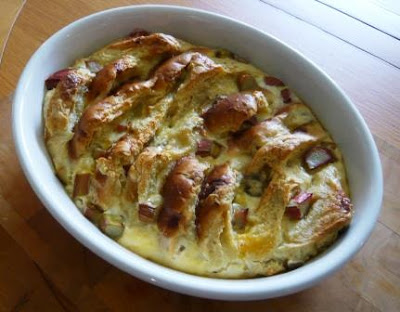 I'm enjoying the challenge of using up what we have in rather than going out to shop.  Equally, going out to shop now results in a kind of ready, steady, cook selection of random ingredients at the moment, which also calls for a bit of culinary lateral thinking.
Anyway, a couple of weeks ago my friend Gaynor recommended the rhubarb and custard hot cross buns from Aldi.  They were a good recommendation but I somehow managed to forget that I had bought two packs (they had loads of them at the time) and discovered the second pack last weekend, in a cupboard and several days past their sell-by date.  They were definitely stale but not mouldy so I instantly thought "bread and butter pudding". 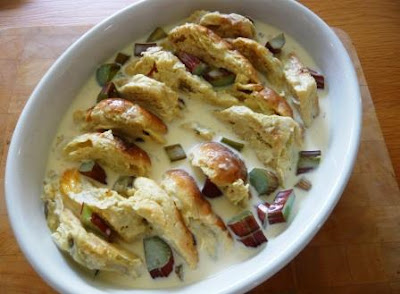 I adapted a recipe for brioche pudding which I have adapted before as you can see here.  Essentially, it's a pack of hot cross buns (any type will work) soaked in the usual egg custard mixture with a few small bits of rhubarb tucked in between the buns.
Luckily I also had a few eggs.  Only days ago there were none to be had anywhere.  I usually get half a dozen from the milkman (yes, we have milk delivered to the door - in real glass milk bottles, no less) but his supplier had sold out.  There were empty spaces on the shelves where the eggs used to be in all our local shops, big and small, even in the little kiosk at our local farm.  Anyway, the milkman had changed his supplier and come up trumps so I had a couple of eggs to spare. 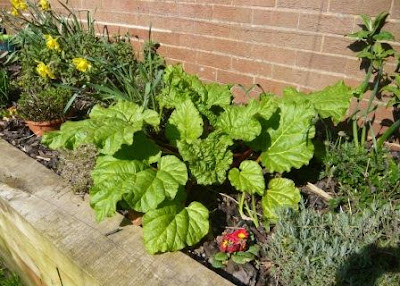 We also have rhubarb in our brand new rhubarb patch.  We planted a new plant last summer and it's taken really well to its new home.  There were several stalks ready for picking and I just used two skinny ones for this pudding. 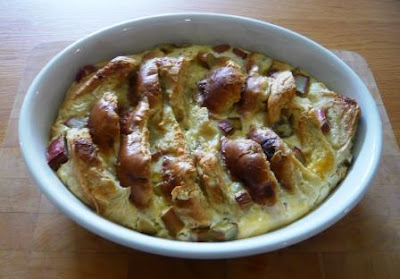 The pudding was delicious.  Gorgeous warm with a slick of cream* or cold with extra custard.
*I also happened to have some UHT cream in stock.  I always take a few boxes of Tesco "UHT double cream substitute" with us to France every time, but of course we're still in the UK.  So all the bits and pieces I had set aside to take have been unpacked and can be used up here.  A lucky stash as it turns out.
Ingredients
1 pack of four hot cross buns, rhubarb and custard flavour or any other kind
butter for buttering the buns
2 thin sticks of rhubarb**
2 eggs, beaten
140ml double cream
250ml milk
1 tsp vanilla extract
2 tblsp caster sugar (I used golden caster sugar as that's all I had)
Method
Preheat the oven to 160°C / 140° fan / gas mk3.  Butter a suitable baking dish.
Slice the buns in half and butter each half.  Cut each piece into two and arrange in the dish, flat edge down.
Trim and wipe the rhubarb and cut into small pieces about 2 cm long.  Tuck them in between the pieces of bun.
Put the eggs, cream, milk, vanilla and sugar into a jug and whisk together.  Pour the mixture carefully over the pudding and press it all down slightly with the back of a spoon or fish slice.
Bake for 30-40 minutes until the custard is set and the buns lightly browned at the tips.  Dust with icing sugar and serve warm with cream, ice cream or custard.
Serves 6.
**My rhubarb was young and skinny so didn't need any pre-cooking.  If using larger sticks later in the season it would be a good idea to poach the pieces in a little water until just softened before adding to the dish.

more of the same faff factor *, puddings, rhubarb, the virus