It’s a phenomenon familiar to most of us I think.

You have some wine, a cake, dessert or a meal somewhere and you really enjoy it, can’t wait to buy a bottle to take home, beg the recipe, get the ingredients and relive the experience.  Only to find yourself thinking : “why on earth did I buy that wine, it’s awful, what was I thinking……..” 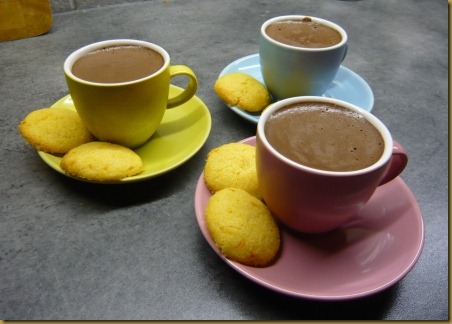 A few years ago we were invited round for coffee to the house of some new friends in our French village and with it the lady of the house served up some little orange and polenta biscuits.  They tasted lovely and I thought it was such nice way to serve coffee so I asked her for the recipe, which she typed out and gave to me.  I have long since lost it and have never found a recipe that looked anything like the same.

However, I remember that she said the recipe came from a Jamie Oliver book.  After Christmas, Sainsbury’s were selling all of Jamie’s early cookbooks for £5, buy one, get one free.  That’s £2.50 each – what a bargain – and in one of them there was the recipe for the orange and polenta biscuits !!

So I bought a packet of polenta. 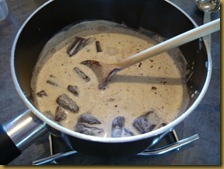 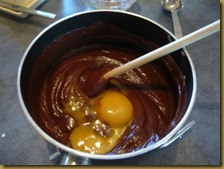 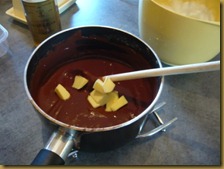 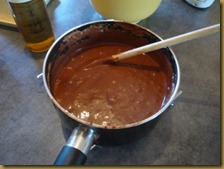 You heat the cream to almost boiling, then melt in the chocolate before adding the other ingredients, finally folding in the egg whites if a lighter mousse rather than a dense a cream is wanted. 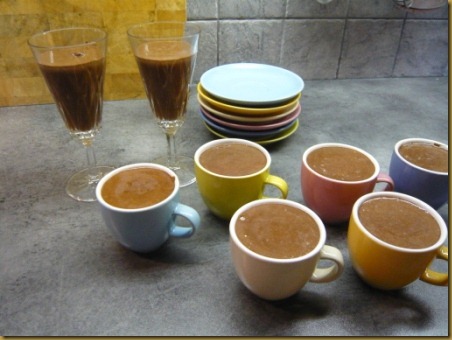 It worked beautifully.  The recipe said it serves four but after I had folded in my egg whites I ended up with eight servings, all small in size, but so rich that they were perfectly ample. 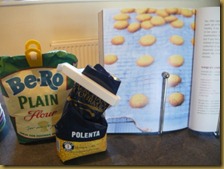 They looked super with the little biscuits served on the saucer but the biscuits themselves were a huge disappointment.

In fact they were horrid.

I just can’t believe that something I remembered as being so wonderful could turn out so badly to the same recipe, but that’s life.  It’s not worth giving the recipe here but it’s a nice idea and I will have a look for another recipe.  Mind you, it might not be very soon because although chocolate and orange are, to quote Jamie, “best friends”, the effect on the waistline from desserts like this is fairly disastrous !!

The chocolate pots were fabulous, very easy to make and well worth the effort.  The leftovers were just as good even two days later so it’s a perfect dessert to make for guests the day before, keeping them chilled in the fridge until needed.

Here’s the recipe for the little chocolate pots.

First, break the chocolate into squares.

In a smallish pan, heat the cream gently until nearly boiling.  Remove from the heat.

Off the heat and after one minute, add the chocolate and stir gently until it has melted and the mixture is smooth.

Next, beat in the egg yolks and brandy and stir again until smooth.

Allow to cool a little more then stir in the butter until smooth again.  You should now have a lovely thick and glossy mixture.

You can use the mixture as it is or, to make a slightly lighter dessert, whisk the egg whites separately in a clean and grease-free bowl until the firm peak stage.  Fold gently into the chocolate mixture, a third at a time.

Pour into little cups, glasses or ramekins.  Small portions are the thing as this is very rich.

Chill for at least two hours before serving.

This is a good dessert for entertaining as it can be made the day before and just kept in the fridge until needed .