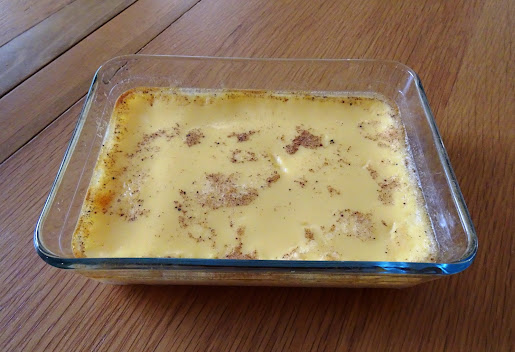 Sometimes the simplest of desserts is just what you need and hits the spot just as much as other more sophisticated concoctions. 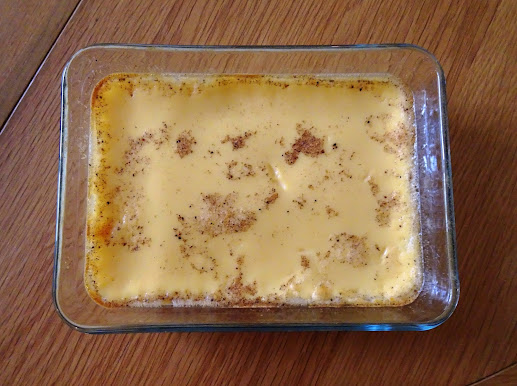 My neighbours had an excess of milk and gave us two pints.  After about three days we were still behind on the milk consumption and I was gleefully thinking of ways to use it up.  We are very fortunate in that we have milk delivered to our doorstep in glass bottles, two pints on Tuesdays and Thursdays and three on Saturdays, making a total of seven per week or one a day.  That's just the right amount for us and the milkman (a young man with alarmingly red dyed hair) also brings us half a dozen totally delicious free range eggs on a Thursday. 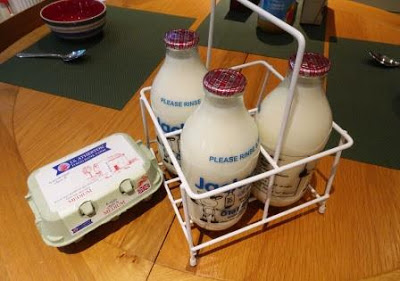 We were behind on the egg consumption as well so an egg custard sprung to mind.  Not a custard tart but just a baked egg custard, just like Mum used to make regularly when she had milk to spare.  In fact even if she didn't have milk to spare.  I would request an egg custard and she would say yes but only if I went to the farm for some more milk.  The farm was called Splash Farm and I would trot joyfully down the road and knock on the door of the farmhouse.  The cows grazed in the fields opposite our house.  The farmer's wife always wore wellingtons and a floral pinny and there was a distinct whiff of cowshed as she opened the door (the only bit I didn't like about the farm).  The milk was in crates standing on the ancient cold stone flags just inside the front door, ready for the steady trickle of callers nipping down the lane for an extra pint or two.  Happy days. 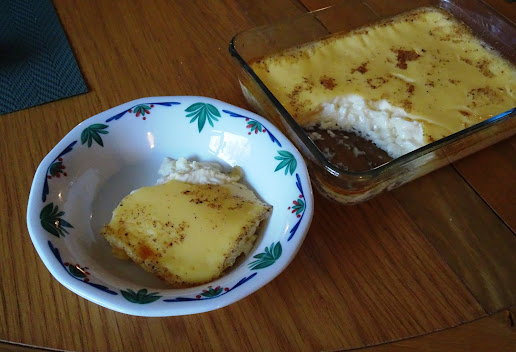 I hadn't made an egg custard for at least thirty years and had only a scant recollection of how my mum used to make it.  I did a bit of internet research and came across this recipe which seemed the simplest and the most like how she would have done it.  Some of the others I found were much too fancy, using cream and flavourings that she would never have used.
I doubled up the quantities in the recipe and made two puddings, giving one back to the neighbours.  I did knock on their door and ask first (socially distanced) if they would like one, not to feel obliged to say yes.  Their eyes lit up and faces beamed.
Although there is only half a pint of milk in each pudding it was enough for four portions.  There was however a great temptation to scoff the lot between the two of us in one go! 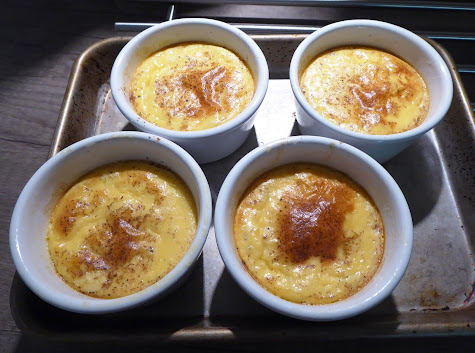 And here's one I made later, using four small ramekins.
They were done in around 30 minutes.
Ingredients
½ pint (300ml) semi skimmed milk
2 medium eggs
1oz (25g) caster sugar
a few drops of vanilla extract
grated nutmeg
Method
Preheat the oven to 170°C / 150° fan / gas mk 3.
Put the milk into a small saucepan and heat gently until hot but not boiling.  Put the eggs, vanilla and sugar into a bowl and give a light whisk to combine.  Pour a little of the hot milk onto the eggs and stir well.  Add the rest of the milk and stir together.  (I read on another website that adding all the hot milk at once can cause the eggs to curdle.)
Pour the mixture through a sieve into a suitable 1 pint ovenproof dish and sprinkle a little grated nutmeg over the top.  (I used a small Pyrex lasagne dish that I got from a charity shop for 50p.  I am always baffled that anyone would give such a useful thing away.)  Another alternative would be to divide the mixture between four ovenproof ramekins.
Bake for about 45 minutes until just set.  It should have a slight wobble and not be either still runny or completely set.  Allow to cool until just warm before serving.
Serves 4.