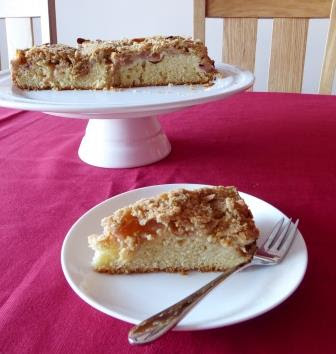 At this time of year I always find myself lingering over the bundles of pink rhubarb that appear in the supermarkets - and thinking that they are a bit pricey.  Luckily they frequently turn up in the bins of items reduced for quick sale.  So the other day I swooped and bought myself two bundles. 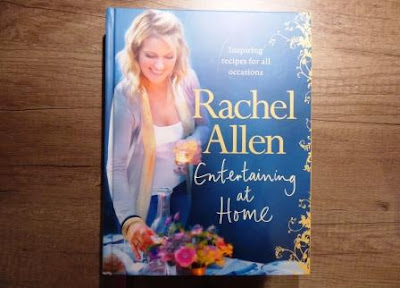 As it happens, I had been talking to a friend of my brother about rhubarb a few days before (we had all gone out for a curry and conversation centred naturally around food of all kinds).  This lady recommended a recipe for a rhubarb crumble cake that she had in an old Prue Leith cook book but when I later Googled it nothing that sounded like it appeared.  What did appear was a recipe by Rachel Allen, which you can see in several places, one of which is here.  That turned out to be a recipe in this book, "Entertaining at Home" which, as it equally happens, I had bought for £1 in a charity shop recently. 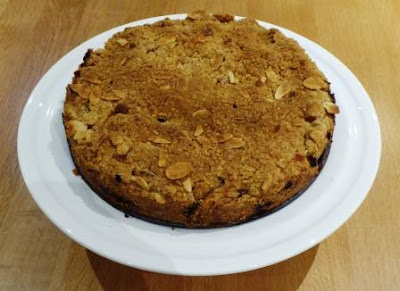 ﻿
So, with all the stars aligning in the direction of a rhubarb cake, I made one, but with a slight amendment to the recipe. 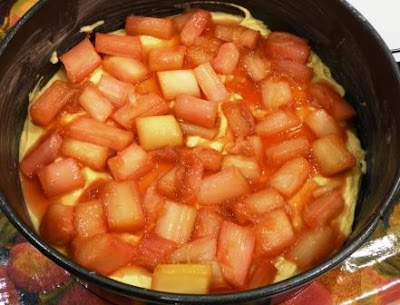 Rachel's recipe is actually for a rhubarb and ginger crumble cake, but I wanted the rhubarb itself to be the star of the show, so I omitted the ginger and added vanilla extract to the cake instead.
I gently cooked the rhubarb in sugar and two tablespoons of water until soft as per instructions, which resulted in quite a lot of liquid.  The recipe doesn't say whether you should add the liquid to the cake along with the rhubarb so I didn't, thinking it would have made the whole thing very soggy.  Even so, spooning the rhubarb out of the pan on top of the cake mixture inevitably meant that a certain amount of liquid went in with it.  As the cake turned out just right, that's what I would do again.  The baking time given was 45-50 minutes but mine was quite well done (not too well done) after 45 minutes so I would check after 40 minutes next time. 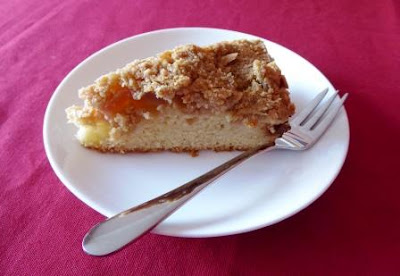 It was lovely!  It had a nice, even texture, just the right amount of tartness in the rhubarb balanced by the sweet crumble on top.  We had ours whilst it was still warm with some cream.  It was just as lovely the next day when completely cold.
This is definitely a cake I shall be making again and I'm looking forward to getting my hands on some green rhubarb later in the year and trying the original version with ginger instead of vanilla.
Ingredients
400g rhubarb, wiped and trimmed into 2-3cm chunks
100g demerara sugar
For the crumble topping
100g plain flour
1/4 tsp baking powder
75g cold butter
75g light soft brown sugar
25g flaked almonds
For the cake
100g softened butter (I used Flora Buttery)
100g caster sugar
2 eggs
2 tblsp milk
1 tsp vanilla extract
175g plain flour
1 tsp baking powder
pinch of salt
Method
Put the rhubarb and demerara sugar into a medium saucepan with 2 tblsp water, simmer on low heat until the rhubarb is just softened, not mushy.  Remove from the heat and set aside.
Preheat the oven to 180 C / 160 fan / gas mk 4.  Butter a 23cm springform tin and line the base with baking paper.
Make the crumble topping by putting the butter, flour and baking powder into a food processor and pulse briefly until it resembles coarse breadcrumbs (or rub in by hand).  Add the sugar and almonds and pulse very briefly again (or stir in).
To make the cake, cream together the butter and sugar until light and fluffy using an electric whisk (or wooden spoon and muscle power), beat in the eggs one at a time.  Whisk in the milk and vanilla.  Sift over the flour, salt and baking powder and fold in.
Spoon the batter into the tin and level the top.  Use a slotted spoon to transfer the rhubarb over the cake mixture in an even layer.  Sprinkle the crumble mix as evenly as possible over the rhubarb.
Bake for 40-50 minutes until golden brown and done.  Remove from the oven and leave to cool in the tin for a few minutes before releasing and turning out onto a wire rack.  Serve slightly warm or at room temperature with a dusting of icing sugar if you like.
Cuts into 8-10 slices.