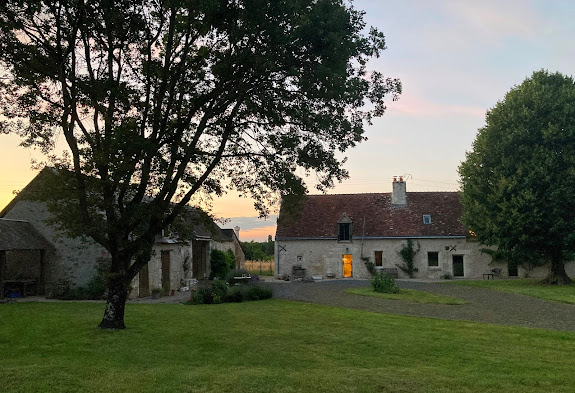 Well, we finally made it to France!  In the end we made a run for it and brought our trip forward by one week, fearing that with the Johnson Variant running rife through the UK, the French might pull up the drawbridge again.  The last few days before we set off were fraught with problems but once we had arrived it was almost as if we had never been away.  You can read about it by looking here. 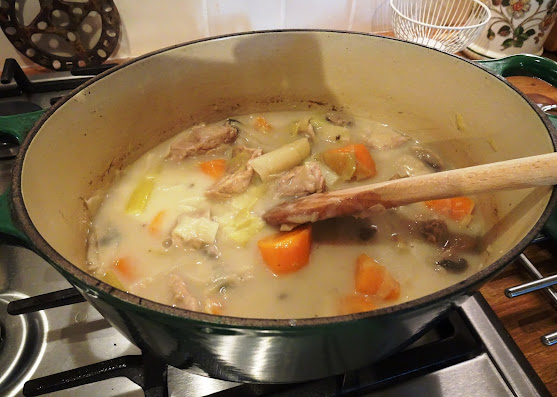 We have been away for ten months and being back is a total joy in so many ways, one of which is shopping.  In the supermarket I spotted a pack of veal.  It was labelled "pour blanquette à mijoter" which means to stew it in a white sauce.  I can honestly say I have never seen veal for sale in the UK anywhere near to home so it's a treat to find it to both eat it in a restaurant or to cook with. 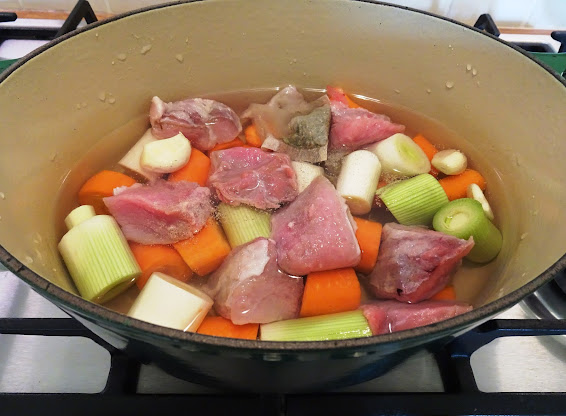 I consulted my French recipe books and the internet and there are so many different recipes for blanquette de veau to choose from.  Some even require that you start one or two days before serving!  I avoid recipes like those.  In the end, I thought it's just a beef stew, made with no browning, how hard can it be?  I decided to follow my instincts and do a mixture of some of the recipes. One of the curious things is that you effectively boil the meat.  I suppose that's no surprise considering meat is boiled in any kind of stew, but it reminded me of something a friend once said.  An American living in France for many years, he told me that the French consider English cooking inferior because we boil our meat, which is odd, considering that I have come across plenty of French recipes where the meat is boiled, especially in country cooking, including this one!
The meat and veg are simmered gently until almost tender then the mushrooms are added.  Then a roux is made to thicken the sauce before serving.  I do like a thick, creamy sauce.  Some of the blanquettes I have been served in restaurants have consisted of meat and carrots in a very watery sauce, which is not as good.  Many of the recipes I looked at suggested that the veg cooked with the meat should be discarded, except maybe for the carrots.  Then the dish can be served in a more attractive way with rice, potatoes, pasta and some other kind of veg - often in restaurants a quenelle of some creamed vegetable.  At home there is no way I would throw out perfectly good cooked veg then replace them with something else!
The last step is to season the sauce and this is where I went completely off piste.  I added a splash of cream sherry and it was delicious.  Not really authentic but "my way". 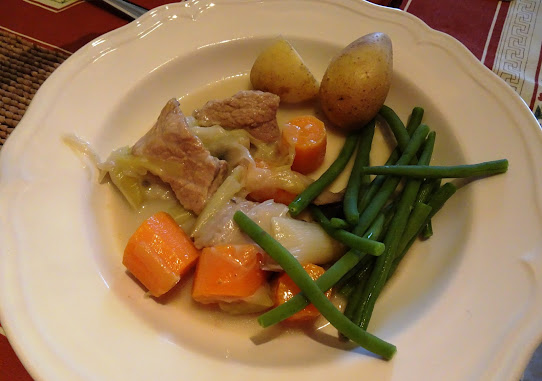 We had ours with some of those slightly golden colour, waxy potatoes that are common in France, and some 'aricot verts - now we're in France it's important to remember not to pronounce our H's!  Oh and of course, a lovely fresh baguette to mop up the juices.
Ingredients
300g veal shoulder or other meat suitable for a casserole, such as chicken, turkey, pork or, if you can get it, rabbit, cut into large bite sized pieces
2 medium carrots, peeled and chopped into chunks
2 small leeks, wiped and chopped into chunks
3 cloves of garlic, peeled and left whole
a large glass of dry white wine
1 bouquet garni
a handful of small button mushrooms or 4-6 larger mushrooms, rinsed and quartered
a large knob of butter, about 30g
1 dessert spoon of plain flour
a splash of cream sherry (optional)
a tblsp cream or crème fraîche (optional)
Method
Put the meat and all the veg except for the mushrooms into a large saucepan or flameproof casserole dish.  Add the bouquet garni and the wine.  Season with salt and white pepper (otherwise known in this house as "canteen pepper").
Pour over enough cold water to cover, bring to the boil and reduce to a gentle simmer.  Skim off any scum that forms at this point.  Cover and simmer for about 40 minutes until the meat and carrots are almost cooked and tender, removing any more scum that forms a couple of times.
Add the mushrooms and cook gently for about 15 minutes more until the meat, veg and mushrooms are tender.  Remove from the heat and leave covered to keep warm.
Next, make the roux by melting the butter in a small pan.  Sprinkle in the flour and beat into the butter to blend together, beating out any lumps, cook gently for a minute or two.  Off the heat, add some of the liquid from the meat and stir in to make a thick sauce.  Add this to the stew - as much as is needed to get the consistency you like.  Add more water if necessary and stir to combine.
Return the stew to the hob to reheat gently.  Season with more salt and pepper if needed and add that splash of sherry and the cream if you like!  Remember to remove the bouquet garni before serving, with potatoes or rice, and other veg.  Plus a nice fresh baguette to clean the dish!
Serves two.
6 comments: