RASPBERRY AND COCONUT CAKE, be careful what you wish for and a demon banished. 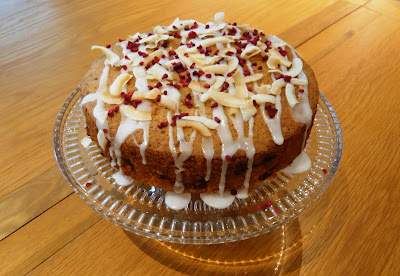 It has been a strange summer.  While in France we have had to endure not one, but three heatwaves.  They only ever last for a few days when at their worst but either side of those three days it can still be unbearably hot.  During the last heatwave we had temperatures of 38 - 43C and either side of that it was well over 30C for days on end.  Consequently we were glad to return to the UK for a couple of weeks to cool off a bit. 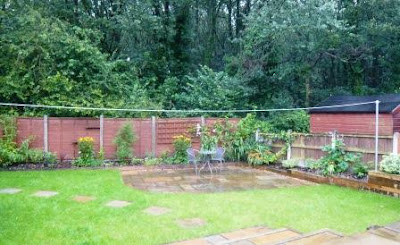 And so, back in the UK, we're getting typical school holiday weather.  A few sunny days in between pouring rain.  In years gone by I would have been spitting nails about the lousy summer weather but this time, having experienced how strangulating such heat can be, I'm glad to be able to get out and about as much as I like, albeit with an umbrella. However, having wished to be a bit cooler, when it was tipping it down the other day I wondered if I should have been more careful what I wished for!  Hopefully it will not continue to rain every day until we return to France. 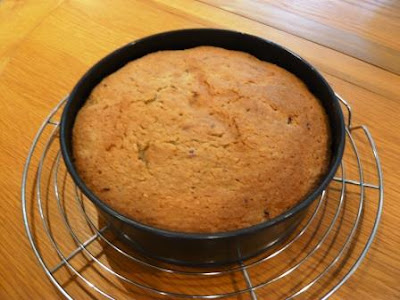 Last week was, apparently, "afternoon tea week".
Who would have thought it?  Everything one does now has its own week!  Still, with visitors coming, at least it presented an excuse to be indoors, while it poured down outside, and bake a cake.  I chose to make a raspberry and coconut cake because there were boxes of beautiful raspberries being sold off very cheaply in the supermarket - a casualty of the cool, wet weather no doubt.
I'd been hankering after a good coconut and raspberry cake recipe for a while and found this one on the Waitrose website.  It looked very promising so I decided to risk it, although adapting it slightly to make a round cake rather than a loaf cake. 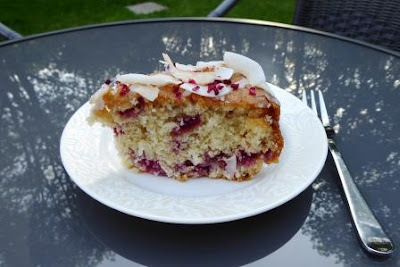 It was delicious!  Moist, with a perfect balance of the sweetness and texture of coconut and the sharpness of the raspberries. 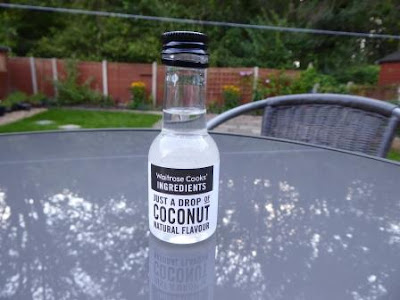 I cheated a bit, having spotted a bottle of coconut flavouring in Waitrose (on one of our occasional pilgrimages to our nearest shop which is about an hour away).  I have no idea how much it actually enhanced the flavour of the cake but I would use it again anyway. 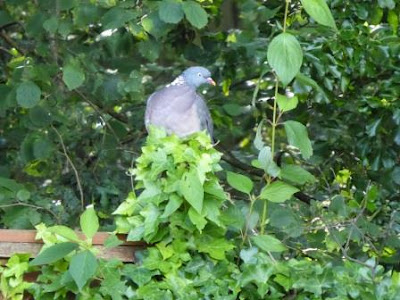 These pictures were taken outdoors the day after I made the cake, when the sun was shining.  I had to be careful not to leave my one last slice of the cake unattended as I seemed to be being watched! 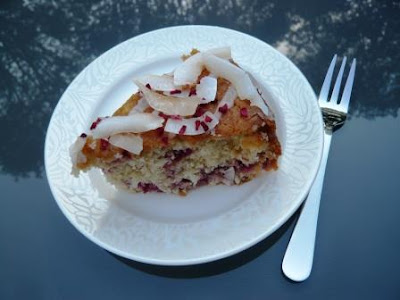 The cake recipe is definitely a keeper.  Instead of decorating it with coconut yoghurt and raspberries as per the recipe I added a drizzle of plain water icing, a scattering of toasted coconut flakes and a sprinkling of freeze dried raspberry pieces.  It looked pretty glamorous I thought. 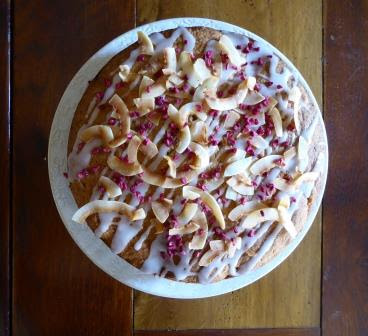 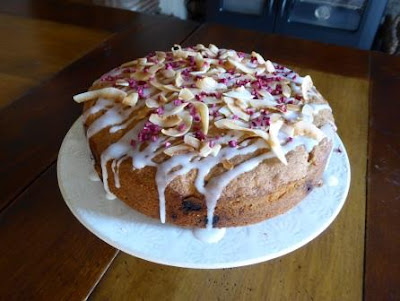 The cake looked and tasted just as good the second time I made it, for a Macmillan coffee morning which we held in France.  (We raised £150.) 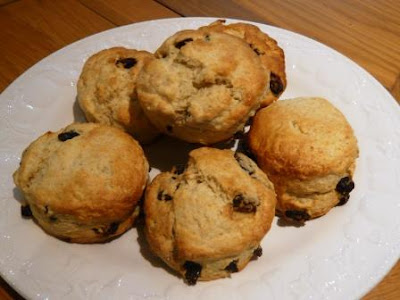 As well as the cake I decided I would have another bash at scones in honour of the concept of "afternoon tea week".  The visitors had been prewarned of my track record in the scone department and promised to bring a saw!  I used a recipe for ordinary fruit scones in the National Trust Book of Scones and......they worked a treat!  Maybe my scone demon has finally been banished - at last - I was pretty chuffed.  I have finally triumphed over my fear of scones after more than fifty years!
Ingredients
175g unsalted butter, softened
175g golden caster sugar
3 eggs
1/4 tsp coconut flavouring
175g self raising flour
100g dessicated coconut
150g raspberries, halved
2-3 tblsp icing sugar, sifted
a handful of coconut flakes
a sprinkling of freeze dried raspberry pieces
Method
Butter and line the base of a 20cm round cake tin.  Preheat the oven to 180C /160 Fan / gas mk 4.
In a large bowl, cream the butter and sugar using a hand mixer, until light an fluffy.  Beat the eggs in a jug with the coconut flavour and add a dribble at a time along with a little flour, beating well with each addition.
Fold in the remaining flour, then the coconut and raspberries.  Spoon into the tin and level the top.
Bake for 50-60 minutes, covering with foil after 30 minutes, until done.  When you remove the cake from the oven leave the heat on, scatter a handful of coconut flakes onto a baking tray and put in the oven for 3-5 minutes until nicely browned at the edges.
Leave the cake to cool in the tin for 10 minutes then turn out onto a wire rack to cool completely.
When the cake is cold, transfer to a plate or stand, mix the icing sugar with a little water to make a runny icing and drizzle it over the cake in a diagonal pattern.  Scatter the toasted coconut over the cake and sprinkle with the dried raspberries.
Cuts into 6-8 generous slices.  (Leftover slices are nice served warm as a pudding with pink custard!)
~~~~~~~~~~~~~~~~~~~~~~
I have since made this cake in a 2lb loaf tin with strawberries instead of raspberries. Decorated with a layer of a thick plain water icing made with 3 tablespoons of icing sugar spread over the top and some sliced strawberries to disguise the inevitable split down the middle!
My latest version was as a COCONUT AND LEMON LOAF CAKE, omitting the fruit and adding the zest of one lemon instead. I decorated it with thick water icing made with the juice of the lemon, decorated with strips of lemon peel and a sprinkling of coconut. Edible flowers (violas) added along the cake to disguise the crack in the middle.  You can see that version here