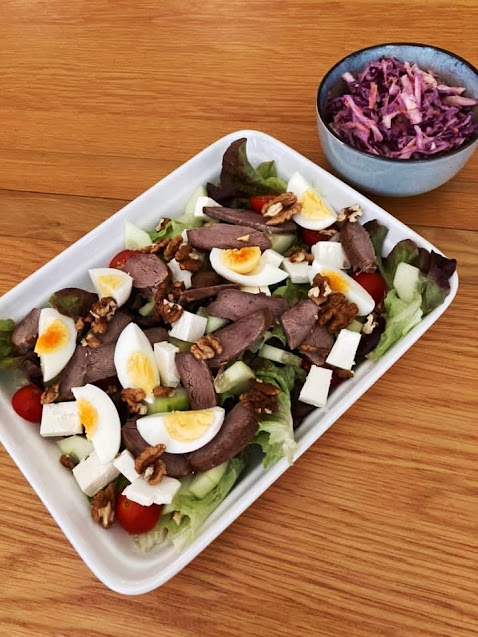 We are now into week two of our two week quarantine and eating our way through a hotch potch of food items.  Some are the contents of our fridge in France, hurriedly cleared before we departed.  Some are what we equally hurriedly thought to put into a Sainsbury's delivery.  Some are what neighbours, my brother and Nick's sister brought and left on the doorstep.  So we will not starve, even if some of the food combinations are a little out of the ordinary, and we haven't yet had to resort to the contents of the freezer.
When I was little a salad was lettuce, tomato, cucumber, spring onions and beetroot, all home grown.  The beetroot would have been pickled in malt vinegar and there might also be home pickled red cabbage, home pickled onions and home made piccalilli if we were lucky.  The meat would have been a thick slice of boiled ham, hand carved from the butcher or sliced on one of those huge slicing machines, some tinned salmon or, if we were very lucky, some tinned corned beef.  On special days it would be tongue and if we were very good a slice of boiled egg.  We always had salad for Sunday tea in the summer (having had a huge Sunday dinner of roast lamb at lunchtime). 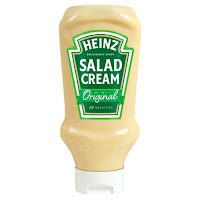 The only dressing would have been Heinz Salad Cream.  I remember the furore when, possibly in the 90's, Heinz threatened to stop making Salad Cream due to poor sales caused by the increase in popularity of other, more fashionable dressings, such as mayonnaise and vinaigrette.  The public revolted and Salad Cream remains on our supermarket shelves!
How things change!
This salad was a glorious mixture of French and English items that needed using up.  The main event was some sliced leftover duck breast.  Every week or two we treat ourselves to a prepared duck dish from Sainsbury's; Gressingham duck in plum sauce.  We had joyfully added it to our rushed order for delivery (although forgot more sensible staple items) and the portions were huge. 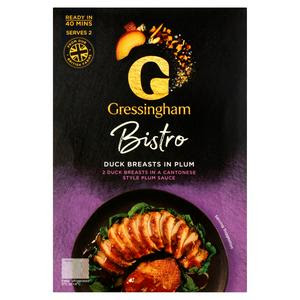 There was the equivalent of one whole breast left over, some of which we had one lunchtime in a wrap and the rest in this salad.
So, salads these days have little resemblance to those I ate in my childhood and up to my forties.  Even in the scotch egg years (home made of course) of the 70's salads were nothing like as exotic as the salads we eat nowadays.  I don't think I encountered a real avocado until well into the 80's!  And as for putting anything warm in a salad........my mum would have detested the way it wilted her lettuce!

Another favourite is homemade coleslaw and I had remembered to put the ingredients into the Sainsbury's basket.

a chunk each of white and red hard cabbage, shredded

a handful of sultanas

*I often add other ingredients if I have them in stock, such as shredded fennel, sliced celery, finely sliced spring onions, chopped chives or other fresh herbs, whole grain mustard, chopped walnuts.

All mixed together with just enough mayonnaise (from France) to bring it together, a dash of French mustard and a splash of white wine vinegar, plus salt and pepper.

Not a pickled onion in sight!!  But I confess to adding a blob or two of Salad Cream.