FIG, APPLE AND ALMOND TORTE (and what makes a cake a torte instead of a cake?) I'm back in France* and a few days ago I went to lunch at a friend's house.  On arrival I admired her fig tree which was loaded with gorgeous small ripe fruit.  On leaving she gave me some of them. 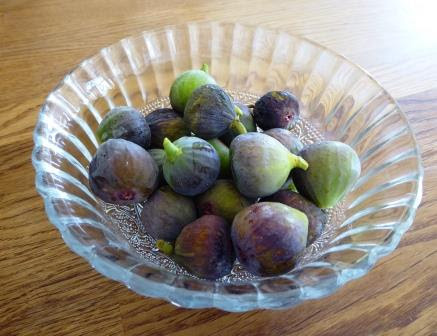 I looked through my collection of cookbooks and on t'internet for some ideas on what to do with them.

I settled on a recipe for "blackberry and apple torte" by Jo Wheatley (one of the early "bake off" winners) which I thought would adapt nicely.  It’s a recipe in her blog which is an adaptation of one from her book called "A passion for baking" where it was originally a recipe for a raspberry torte.  I do have the recipe book but it's back in the UK so I couldn’t do what I would normally do which is to go and look it up! The raspberry version of the recipe can be found, if you Google it, on the Daily Mail website.   I hope you're keeping up! 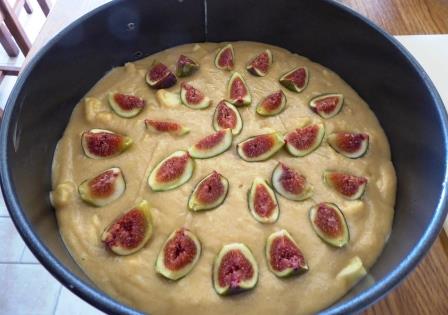 My own adaptation was to use the small figs instead of the blackberries. However, with both recipes open on my iPad I spotted a discrepancy; in one it suggested an oven temperature of 170° fan and in the other 160° fan.  Hmmmm…… 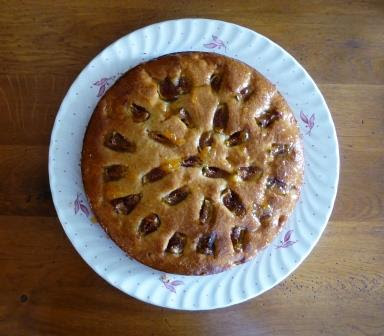 I decided to split the difference and go with 165° and it was done in 40 minutes.  Next time I would check after thirty because it was if anything a tiny tad over baked.

A puzzle sprang to mind as I was looking at these recipes and that is - what makes a cake a torte rather than a cake?  I Googled it and there were so many different explanations that I decided it's probably  entirely down to the whim of the recipe writer.  For myself I thought a torte would be more of a dessert cake than an afternoon tea kind of cake so that’s what I've stuck with here!  Any other suggestions on a postcard, please! 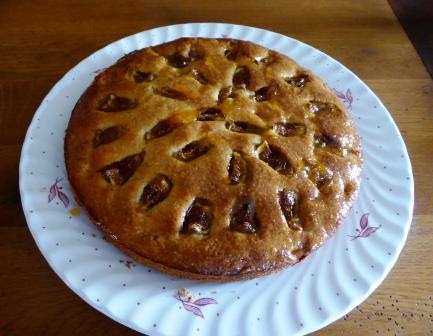 It was a very nice cake.  Torte.  Whatever.  I like recipes that can be adapted to use whatever fruit you have in and this one is good for that.

1 eating apple, peeled and cubed, made up to 150g fruit with small figs, quartered.

Preheat the oven to 165° fan.  Butter and line the base of a 23cm round springform tin.

In a large bowl, beat together the flour, sugar, butter, eggs and cinnamon until smooth.  Stir the cubes of apple through the mixture.

Spoon the mixture into the tin, level the top and tap on the worktop a few times to dispel any trapped air.  Arrange the quartered figs on top and push slightly into the mixture.

Bake for 30-40 minutes until done.  Cool in the tin for five minutes before turning out onto a wire rack to finish cooling.

Put the apricot jam into a small saucepan and heat gently to melt it.  Brush over the finished cake. (Alternatively, just dust with icing sugar.)

Serve with cream, ice cream or crème anglais.  Also delicious just as it is.

*When I say "I'm back in France" it’s because Nick is still in the UK.  Before my dad died I spent several weeks in the UK while Nick was in France with the cat and the dog.  Hence we are significantly out of step with each other in terms of the number of days we have left out of our 180 days.  (Our six month visas expired a couple of weeks ago but we can still go up to 180 days within the Schengen rules.)  Consequently he's spending another ten days in the UK so that he can catch up a bit and we can both stay here until the end of October.  It’s all so complicated since Brexit.

Our plan was that my brother would be spending the ten days here with me so he could have a bit  of a holiday.  Looking after the care of an elderly person month after month is exhausting, draining and all consuming and we are all in need of some rest and relaxation.

Sadly, not many weeks after the funeral my brother ended up in hospital himself.  He had a pulmonary embolism with complications and has now been there for five weeks, the last four of them in intensive care.  He's very poorly indeed.  It never rains but what it pours.  This has not been the best year for us.