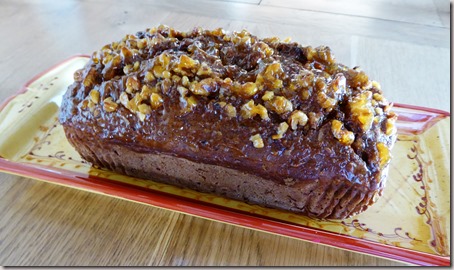 Nick made this cake for our last cake club.  The recipe comes from a lovely little book called “Cooking with apples and pears” by Laura Washburn.

It’s a lightly spiced loaf cake with, as you would imagine, apples, carrots and walnuts.  Nick followed the recipe to the letter as usual, apart from adding a few extra chopped walnuts scattered on the top before baking and an apricot glaze, for extra glam.  Both the apples and the walnuts were windfalls.  Fresh walnuts are so wonderful, tender and sweet and nothing like the dry and bitter ones often available to buy.

It was delicious in the way that a no nonsense date and walnut loaf is delicious – homely and not too sweet and therefore sometimes preferred spread with a little butter.  I liked it plain. 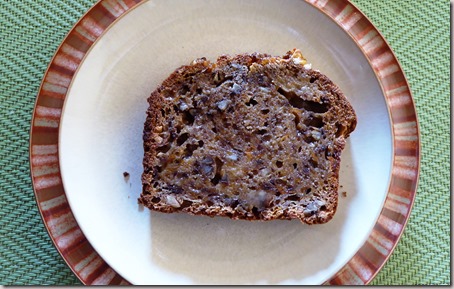 There was a good chunk of cake left over after the meeting and as we were heading back to the UK a couple of days later, I put it in the freezer.  Three weeks later we returned to France so out of the freezer it came and then it really came into its own – toasted and buttered.  Absolutely delicious and definitely a cake I will be making myself again – unless I can get Nick to do it for me!

a few extra chopped walnuts for the topping (optional)

Put the dry ingredients into a large mixing bowl and mix together.

Put the apple juice, melted butter and eggs into another bowl and mix together.  Add this to the dry mixture and mix to combine.

Squeeze as much moisture as possible out of the carrots and apples then add to the mixture with the walnuts and stir until just combined.

Transfer to the tin, level the top and add the extra chopped walnuts if you are using them.  Bake for 1-1¼ hours.

Leave to cool in the tin for a few minutes then turn out onto a wire rack to cool completely.  Warm the apricot jam in a small pan and brush over the cake to glaze it if you like. 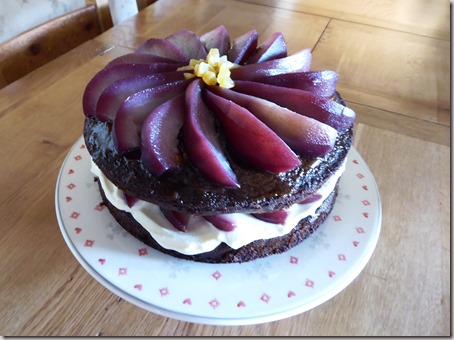 I made this cake for the cake club meeting in October.  The theme was “autumn” and for me that always means ginger - and lots of it.  My mum had a very small repertoire of cakes and her ginger cake was my favourite.  The recipe probably came from her ancient, battered copy of the Be-Ro book and I remember the joy of coming home from school to the smell of a ginger cake in the oven. 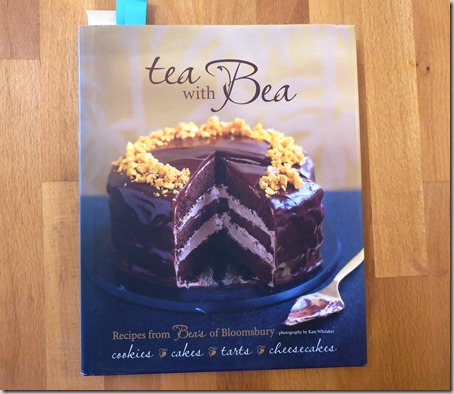 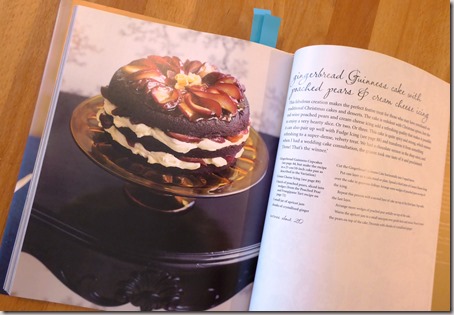 For this cake club meeting I was hoping to do much better than the last two where my offerings were, sadly, disappointing to say the least.  This is the risk you take when you use a recipe for the first time – you have no idea how it’s going to turn out until it’s done.  This time I was keen to prove (if only to myself) that I can make a good cake and I chose a recipe that I had had my eye on for a long time, just waiting for the right occasion to make it.  It comes from a book called “tea with Bea”. 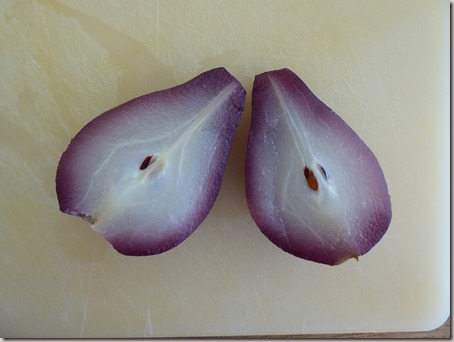 We like pears poached in red wine, cooking them for hours so that they become ruby red all the way through.  For this recipe you poach them just until they are tender which means the wine has coloured just the outer part of the pears, making them look very pretty when they’re sliced. 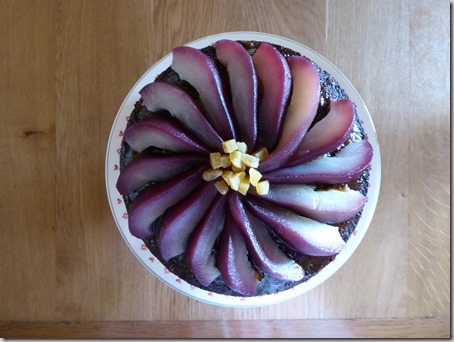 The cake was not difficult to make but had more steps than I can usually be bothered with.  The recipe suggests baking one 23cm cake and cutting it into three layers.  I’m not fond of cutting a cake into layers once it’s done – it’s far too nerve wracking for my liking.  And all the three layer cakes I have made have ended up a bit wonky, unwieldly and hard to slice.  So I decided to make two 23cm cakes and sandwich them together.  Consequently I amended the original recipe to allow for the reduced amount of filling required, also for the ingredients I had available.

I have to say it looked fabulous and was well worth the effort.  You can read about the rest of the bakes at the meeting here. 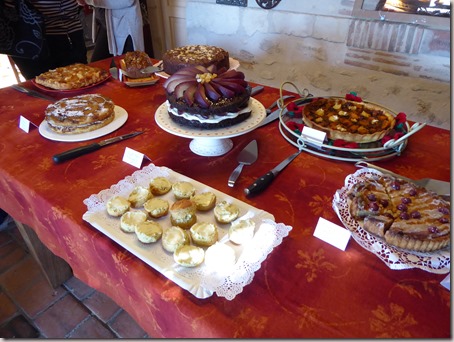 For the ginger cake

For the poached pears

½ bottle Merlot or other red wine

For the cream cheese icing

The first task is to poach the pears and this can be done the day before if that helps.

Put all the ingredients except for the pears into a large saucepan, bring to the boil and when the sugar has dissolved add the pears.  Put a circle of baking parchment on top, weighted down with a plate or saucer, and simmer for about 30 minutes until the pears are tender.

Remove the pears and allow to cool.

To make the cake, first put the Guinness and treacle into a tall saucepan and bring to the boil over high heat.  Remove from the heat and add the bicarb – which will make the liquid fizz and bubble up, hence the need for a tall pan.  Set aside to cool completely – which takes quite some time.

In a large bowl, mix together the flour, baking powder and spices.

In a separate bowl, beat together the eggs, sugars and chopped ginger, beat in the oil, add the Guinness liquid and combine thoroughly.

Add the egg mixture to the dry ingredients and mix until just combined.  Divide between the two prepared tins and bake for about 40 minutes or until done.  After a few minutes remove to a wire rack to cool completely.

To assemble the cake, cut the pears in half, remove the cores and cut each half into four wedges.

Put one cake on a plate or cake stand and spread thickly with the cream cheese icing.  Arrange half of the pear wedges on top and add the second cake.

Brush the top of the cake with the warmed apricot or ginger preserve and arrange the remaining pear wedges over it.  Decorate with the chunks of crystallised ginger.