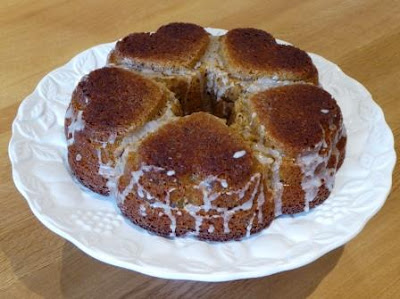 It was my sister-in-law's wedding anniversary yesterday and she phoned to say that she and her husband were going out for lunch and would like to pop in and see us on their way home.  As it is also Valentine's Day tomorrow it seemed appropriate to bake a Valentine cake.  When I asked my own Valentine, Nick, what kind of cake he would like he asked for a ginger cake.  No surprise there. 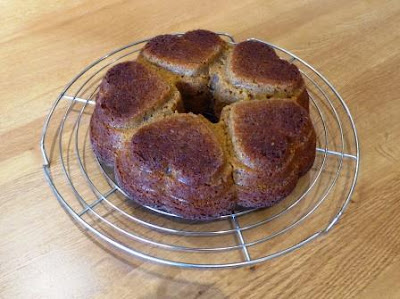 I needed to bake a cake that would be ready to eat in just a few hours' time.  This made choosing the recipe a challenge as many of them say that the cake improves with keeping, being at its best a few days after baking.  I found one that didn't, the recipe by Delia Smith for her preserved ginger cake, which you can see here.  In her recipe the cake is baked in a square tin and decorated with fondant icing and chopped preserved ginger.  I have made it before which you can see here but this time I wanted to bake mine in my heart shaped ring tin instead.  The quantities seemed about right so I decided to risk it. 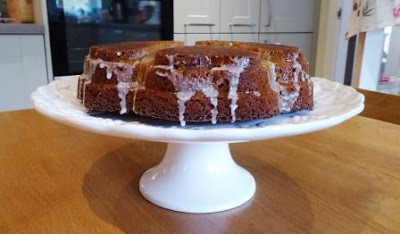 The tin is actually a silicone mould that I bought in a sale a few years ago and only comes out of storage once a year for Valentine's Day.  I have had mixed success with silicone moulds in the past in that the cake doesn't always come out in one piece.  However, by using my own homemade cake release paste it slipped out clean as a whistle with just a little shake.  Marvellous!
I obviously omitted the fondant icing and drizzled a simple lemon water icing over the cake instead, which worked really well.  Mind you, I had to put the cake outside to cool so that I could ice it and it was done in the nick of time.  It landed on the cake stand as the happy couple rang the doorbell! 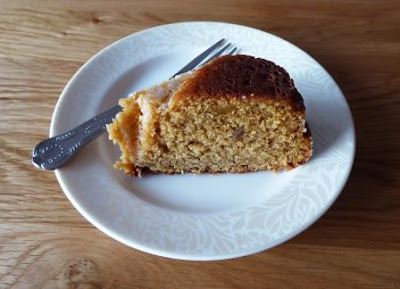 This was an excellent cake!  I have given it two stars in terms of faff factor as personally I find chopping stem ginger really fiddly and time consuming.  However, it was well worth it.  It's a truly gorgeous ginger cake, very gingery with a lovely texture.  You can't really go wrong with a Delia Smith recipe, can you?!
Ingredients
225g self raising flour
1 slightly rounded tsp baking powder
175g spreadable butter
175g golden caster sugar
3 eggs
1 tblsp black treacle
2 tsp ground ginger
2 tblsp milk
1 heaped tblsp ground almonds
5 pieces preserved stem ginger
2 tblsp ginger syrup from the jar
50g icing sugar
juice of half a lemon
Method
Grease a ring tin with cake release paste, or melted butter.  Or butter and line a 20cm square tin.
Put your tin of treacle into a dish or pan of boiling water.  This makes it runnier and easier and less messy to measure out.
Chop the pieces of stem ginger fairly small.
Preheat the oven to 170C / 150 fan / gas mk 3.
Sift the flour and baking powder into a large bowl.  Add the butter, sugar, eggs, treacle and ground ginger and beat with an electric whisk for about a minute until light and creamy.
Add the milk, ground almonds and ginger syrup and mix to combine.  Finally mix in the chopped stem ginger.
Spoon into the prepared tin and level the surface.  Bake for 40-50 minutes until done.
Cool in the tin for 10 minutes then turn out onto a wire rack to cool completely.
Make a runny icing by mixing the sifted icing sugar with enough lemon juice until it's roughly the thickness of single cream.  Drizzle over the cake in whatever pattern you like.
Cuts into 10-12 slices.