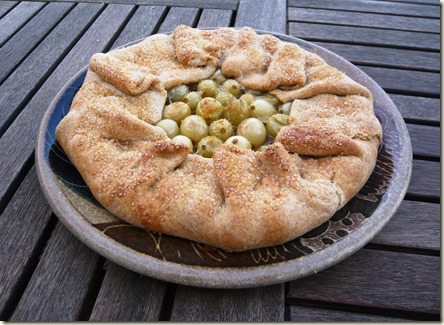 We are back in the UK briefly for a funeral.  Nick’s mum’s funeral.  Two funerals in one year is more than enough.  It should have been three but we were unable to make it to his aunt’s funeral, his mother’s oldest sister who also died earlier this year.

We came back the long way via Portsmouth to avoid Calais in case there were more shenanigans and the port and tunnel were closed again.  Normally it wouldn’t matter if we didn’t make it back home but there was no way we wanted to risk being stuck in transit for such an important event.

The funeral itself is tomorrow and it will be sad but also a relief.  It was her time, she was ninety one and life was no longer that much fun for her.  We’ll all be glad when its over.

Anyway, on arriving back after a journey that took nearly sixteen hours, I opened the fridge to find a dish of gooseberries in there.  Put there by my dad, who is eighty seven next, picked from his lady friend’s garden.

Life, eh?  The gooseberries cheered me up no end, we love them in this house. 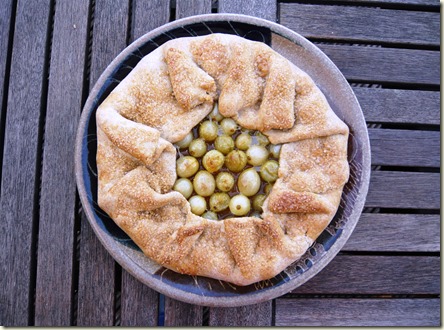 Then this morning I spotted a recipe for this tart on the lovely blog Tin and Thyme.  The recipe uses half ordinary flour and half spelt flour.  I felt fairly sure we had some spelt flour somewhere so went a-rummaging and sure enough there it was, at the back of the cupboard.

Nick pulled a face when I mentioned the spelt flour.  Spelt is thought to be healthy and he doesn’t really do healthy.  Not in baking anyway.  Not since his mum and dad turned vegetarian and she took to making wholemeal pastry.  It was not the best pastry, bless her. 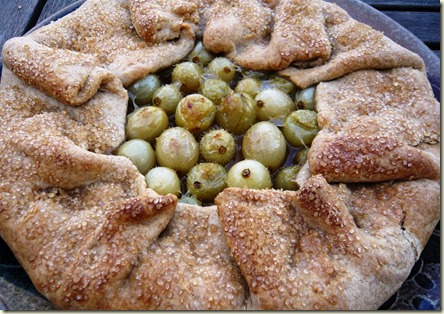 I had just the right quantity of gooseberries for the tart and it was delicious.  Nick and my dad declared it so and I agreed.  I have seen recipes for this kind of tart many times – the folded over pastry rough and rustic kind – but never made one before.  It was a revelation and I will make it over and over again, with other fruits.  A great success.

Thanks to Choclette for the recipe.  You can see the original here.  My only adaptation was that I used slightly less butter in the pastry (125g) and milk instead of yoghurt to combine it – because that’s what I had available.