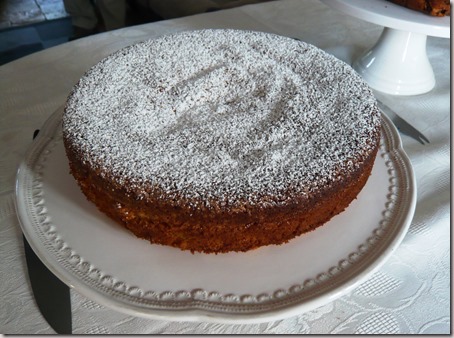 Nick made this cake for our very last Clandestine Cake Club meeting.

You may or may not know that the CCC is closing down at the end of this month.  It seems that the club became immensely popular and with free membership costs spiralled out of control and so those at CCC HQ decided to call it a day.

There is a CCC Facebook group that seems to be thriving but in our Loire Valley branch of CCC not all of the members have a Facebook account so that was a non-starter for our club.

For us the cakes were the central point yet almost incidental – a reason to get together for tea and cake (or more usually wine and cake) and have a good old chinwag about this and that and life in the Loire Valley in general.

Numerous spin-off cake clubs have been formed to continue the tradition and there was never any possibility of our members hanging up our aprons for good.  So we formed the Loire Valley Cake and Bake Club and have our own blog which you can see here.  The major difference between our former club and the new one is that members opted overwhelmingly to abandon the “cake only” rule and be able to bring any baked item that fits with the theme of each meeting.  Personally I confess to being slightly disappointed about this. 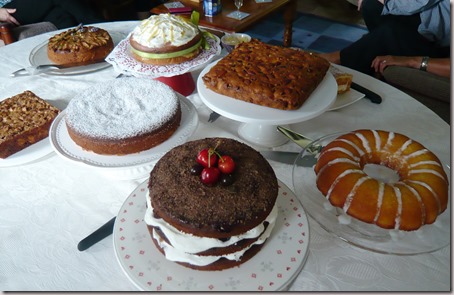 The sight of as many as fifteen absolutely drop dead gorgeous cakes on the table at every meeting was simply amazing, beyond my wildest expectations when I started the club.  Even the odd plain and humble offering blended in well and was always appreciated.  As in life, looks are not everything and it was often the plain, old fashioned cakes that disappeared first.  I can’t really see how a plate of buns or flapjacks can compare to all of that but am more than willing to be convinced! 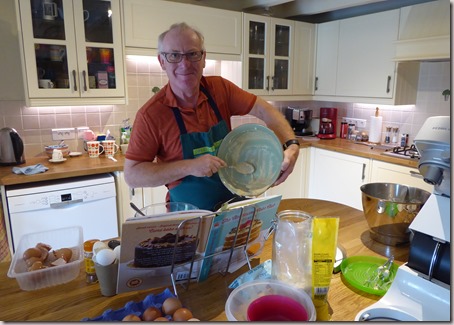 Anyway, the theme for our last meeting was “Cakes of Europe” and it was appropriate that for it Nick should choose to bake a recipe from one of the CCC cookbooks.  He chose a Spanish Almond Cake, a traditional Mallorcan cake containing lots of eggs and almonds and flavoured with cinnamon and lemon. 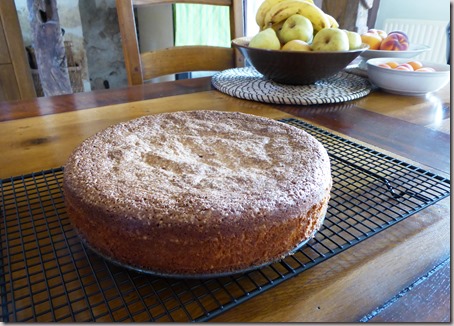 It was a great success and went down well at the meeting.  Nick only used to bake occasionally before the Loire Valley CCC was formed but has turned into an accomplished and adventurous baker.  In fact the club has a number of male bakers, prepared to have a go and not miss out on the fun.

icing sugar for the top

Combine the almonds, lemon and cinnamon in a bowl and set aside.

Separate the eggs and beat the yolks with the sugar, using an electric whisk, until light and creamy.  In a separate bowl whisk the whites to the soft peak stage.

Fold alternate spoonfuls of the egg whites and dry ingredients into the yolk mixture until all is used up.  Pour into the prepared tin and bake for 40 minutes or until done.

Cool in the tin.  Turn out onto a plate or stand and dust liberally with icing sugar before serving. 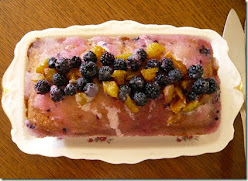