RASPBERRY SLICE–a request for a recipe. 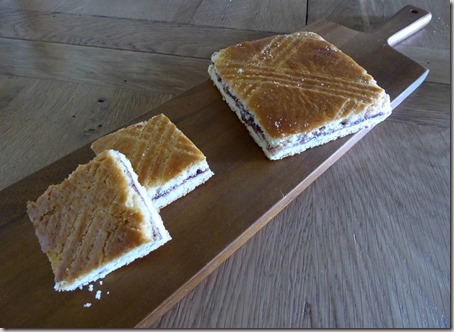 This is not a recipe, but a request for one!  The raspberry slice or pavé framboise is a delicious thing that I sometimes buy from our favourite boulangerie in Descartes. 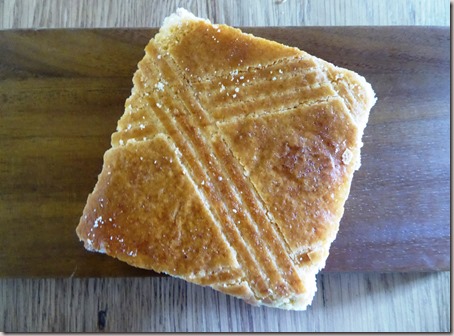 I would really like to know how to make it!  It comes as a large square which I usually then cut into four smaller squares to serve as a dessert or with a cuppa.  A whole slice takes some eating but a small one is quite manageable – in fact we can usually manage a couple! 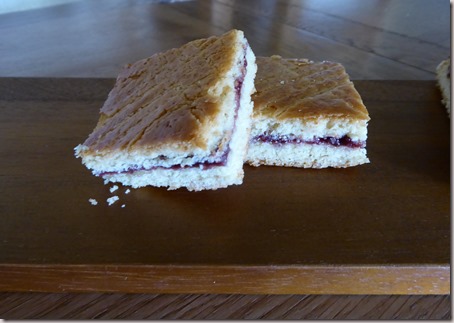 Its type is very much a throw back to my childhood and I’m sure that either my mum used to make something similar or it was served for pudding at school dinners.

I have looked in my cookbooks and on the internet and none of the recipes I have found seem quite right.  Some have a pastry base, some have coconut in the topping, but this has neither of those.

The top and bottom are the same, a bit like a firm but crumbly cake or soft biscuit texture.  Definitely not pastry yet the top looks like it has been given an egg wash glaze.  In between there is a raspberry layer which could be jam or just fruit.  Either way it is delicious!

So, if anyone out there has any idea how to make it, I would be very pleased to hear about it!

more of the same tray bakes