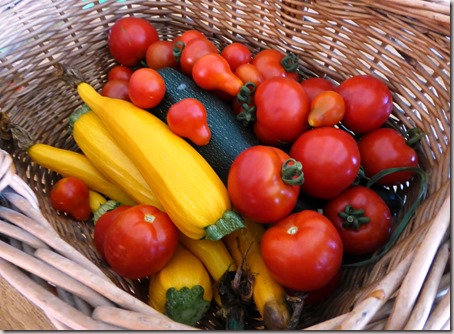 Our courgettes and tomatoes just keep on coming!  This way of using them is an alternative to the usual ratatouille – a kind of baked ratatouille.  The idea came from my friend Ken’s blog – they seem to be having a glut of courgettes this year too.  You can see his post here. 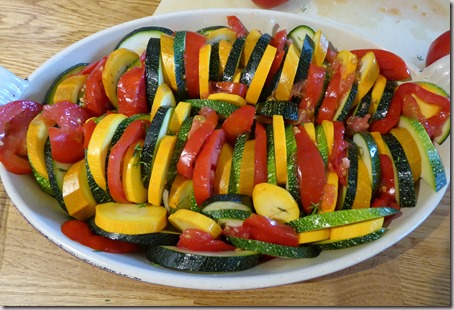 Essentially you put a layer of sliced onions in the bottom of a suitable dish, arrange sliced courgettes and tomatoes standing up on their edges on top of the onions, add some sliced garlic and bake.

This gratin dish came from a local French brocante a couple of years ago.  It’s a well used Le Creuset style cast iron gratin dish and cost me the princely sum of 1€.  The brand is actually Cousances, another maker of cast iron cookware made in France that often turns up at brocantes and vide greniers for next to nothing.  I find it odd that the French seem happy to virtually give away such valuable items.  Is it because this kind of cookware is no longer fashionable or that the French have abandoned home cooking like we have in the UK?  Well, a lot of us have, judging by the huge variety and volume of ready meals for sale in every UK supermarket.

These days it’s much easier to buy a ready meal in France than it was say ten years ago.  Friends who live in France full time report that French housewives – and the cooking around here does still seem to be done mainly by the lady of the house – use as many ready meals and convenience foods as the British do.  For microwave cooking you don’t need a cast iron dish that fifty years ago would have been a prized possession in the kitchen.

Not that I wish to be judgmental.  When we were working we cooked from scratch most days because that’s what we were used to.  We cheated by using convenience ingredients but mostly our meals were uncomplicated, home cooked affairs.  However, I dare say that if we had had kids or jobs where it’s not possible to feed everyone around the table at the same time - or even a sensible time, as is often the case in modern families – we would probably have used ready made foods and convenience items much, much more.  We had the luxury of both of us arriving at home at around the same time early evening and we enjoyed creating something nice to eat over a glass or two of wine.  Not everyone is that lucky and let’s be honest, not everyone loves food that much and most can find much more exciting things to do with their time. 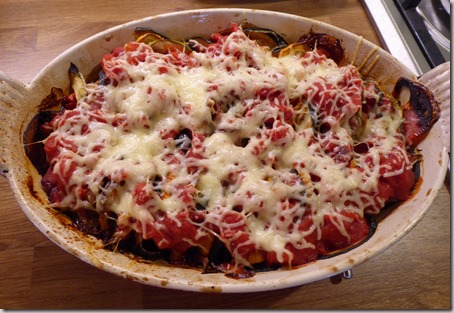 We baked our gratin for about 45 minutes, adding some chopped tomatoes thinned with a splash of white wine after about 20 minutes to stop it from drying out or becoming too crozzled round the edges before the middle was done.  We served it alongside some green beans and a chicken traybake and it was delicious.

Ingredients (quantities variable according to your dish)

1 tin or box of chopped tomatoes

a handful of grated cheese, eg emmental or cheddar (optional)

Peel and thickly slice the onion and lay the slices in a gratin or other shallow dish.

Wipe the courgettes, aubergine and tomatoes and cut into slices about the thickness of a £1 (1€) coin.  Arrange standing in their edges in rows on top of the onions.

Peel the garlic and tuck slices in between the other veg.  Drizzle with olive oil, season, sprinkle with herbs if you like.

Bake in the oven for 45 minutes or until the veg are soft and browned.

After about 20-25 minutes cooking add the chopped tomatoes thinned with the wine to stop the veg from drying out.  Sprinkle with grated cheese if you like.  Serve hot.