COURGETTE CAKE - ways of using a glut of courgettes #1 and the tale of things that go bump in the night. 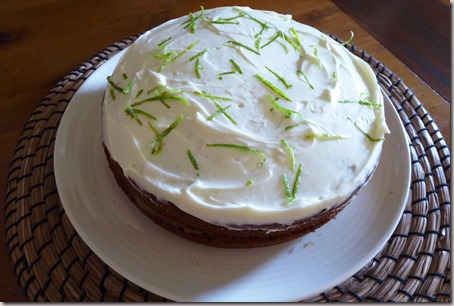 Our courgette plants are doing really well at the moment, to the extent that we can hardly keep up with the supply of them.  We have been giving them away (as you do) and eating loads in the usual favourite recipes.  In an effort to avoid temptation to put them on the compost heap, I have been looking for other ways of using them. 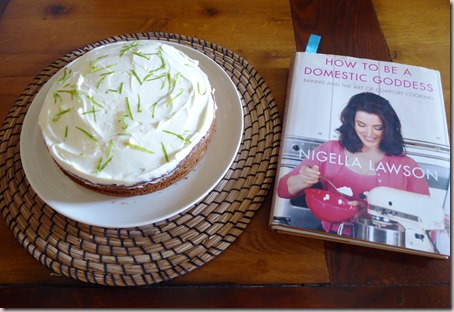 A courgette cake is hardly a radical concept these days and I remember taking my first chocolate courgette cake to work and feeding it to my astonished colleagues at least fifteen years ago.  None of them guessed that the “mystery ingredient” contained therein was courgette, despite the flecks of green in the cake!

This time I was looking for a recipe that used more than just one or two skinny little courgettes and when consulting the internet, Nigella’s recipe was alluded to as a good one more than once.  Luckily I had availed myself of a copy of her relevant cookbook, “How to be a domestic goddess” in a local charity shop only recently so was able to follow the recipe on paper – so much easier than on my iPad where I keep having to reload it at crucial moments – goodness only knows how anyone manages to cook from their mobile phone. 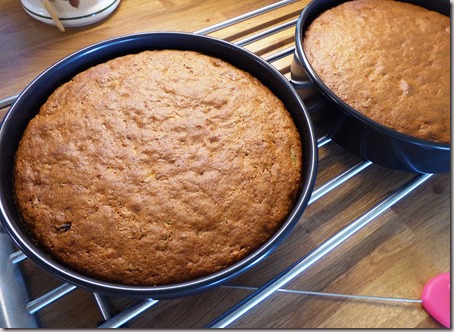 As usual I had to adapt the recipe a bit for what I had in stock.  I used her tip on using shop bought lemon or lime curd and sharpening it with a dash of lime juice.  I didn’t have any raisins to hand (they were a casualty of the “things that go bump in the night” incident recently) so used a tablespoon of home made mincemeat that I had in the fridge.  I had no pistachios so decorated the top with slivers of lime zest.  Last but not least, I found the quantity of cream cheese icing to be rather a lot so didn’t put all of it on the cake.  About two thirds of the stated amount would have been enough.

After adding the flour the mixture was rather stiff and my instinct was to add a splash of milk to loosen it a bit.  But I have found that Nigella’s recipes always work so soldiered on and hey presto – once the courgettes are added the mixture becomes sensible again.  I should never have doubted……. 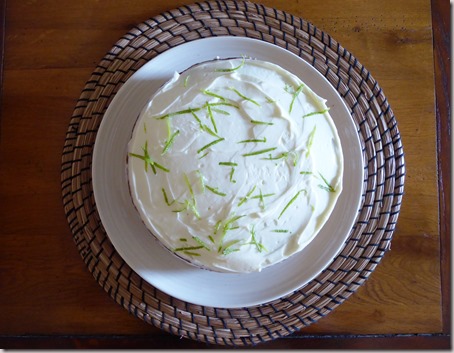 So there we are, one courgette cake, or in my case, courgette, lemon, lime and mincemeat cake, but that is rather a mouthful.

It was delicious.  Thinking about it, there was no actual flavouring in the cake.  Courgettes have no flavour and there was no vanilla, spice or zest of any kind.  It was all in the filling and topping.  However, it had a lovely moist texture and went down really well at a gathering where the boys watched France win the World Cup on TV and the girls sat on the terrace sipping chilled rosé wine.  Some say the French won the day but personally I think it was us girls…….

As for the “bump in the night” incident, we were watching TV late one evening and got to a tense action part of “Designated Survivor” when there was an almighty crash and the sound of breaking glass coming from the other end of the house.

All four of us (me, Nick, our visitor and Hugo) dashed to see what was going on and peered cautiously round the door of the utility room, fearing – who knows what.

The tiled floor was covered in a sea of broken glass, jam, olives, gherkins and other miscellaneous contents of the wall cupboard.  Including, as it turns out, my packet of raisins.  The doors of the cupboard were still closed.

The culprit was not Daisy this time, or even a burglar, but the two little front top shelf supports that had broken, tipping the shelf and its contents out of the cupboard and onto the floor with such force that the doors having been flung open bounced back again and remained closed.

For the topping and filling

juice and zest of 1 lime

Wipe the courgettes clean but do not peel them.  Grate them using the course side of a box grater.  Squeeze small handfuls and place in a sieve over a bowl to allow any more liquid to drip out.

Beat together the eggs, oil and sugar with an electric whisk until light and creamy.  Sieve in the flour, baking powder and bicarb and beat again to combine.  Stir in the courgettes and mincemeat until combined.

Divide evenly between the two tins and level the tops.  Bake for 30 minutes until firm and golden brown.  Cool in the tin for a few minutes then turn out onto a wire rack to cool completely.

For the filling, take two tblsp of shop bought lemon curd and add a dash or two of lime juice to sharpen it to taste, mixing well.

In a small bowl, beat the cream cheese until smooth and sift in the icing sugar, beating well.  Add lime juice to taste.

When the cakes are cold, sandwich the two together with the lemon curd.  Spread the cream cheese on top and scatter a few slivers of lime zest over to decorate.

*consider using about a third less cream cheese and icing sugar for the topping as I found the above quantity too much.