The local Clandestine Cake Club meeting this month was themed “Vintage”.  I tried to imagine what “vintage” actually means and decided it was probably anything from the late 19th century until maybe the 1950’s.  I considered all the old family favourites such as battenburg, parkin and coffee cake but fancied making something unusual.  I spent a few minutes looking up “vintage cakes” on the internet and something called “war cake” cropped up several times. 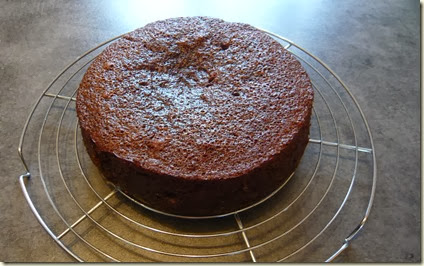 A war cake is one made during war time when many cake ingredients might be too expensive or completely unavailable.  So almost all of the recipes use  shortening  (white fat) instead of butter or margarine, and no eggs, both of which would have been rationed during the second world war.  As food rationing was still in place when I was born, the idea of making a war cake appealed to me.

I also liked the idea of using what I had in, rather than going out to buy special ingredients.  Anyone trying to eke out their food rations would probably have used lard, which is basically rendered pig fat.  Amazingly, I stumbled across a recipe written by the Duchess of Windsor, Wallis Simpson, for something called “pork cake”.  You can read about that here.  The recipe is in the cookbook she herself wrote called  “Some Favourite Southern Recipes of the Duchess of Windsor”. 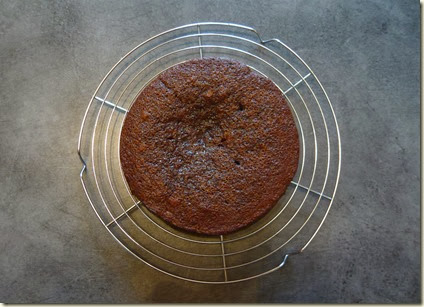 Now who would have thought that the Duchess of Windsor, whose occupation is described in Wikipedia as “socialite”, would have written a cookbook?  As a complete coincidence, last month we visited the château in the Loire where Edward and Mrs Simpson were married.  It was a charming and captivating place and I am currently posting lots of pictures of it here if you’re interested.

A common feature of war cake recipes is that the fruit is boiled before stirring in the flour and spices.  My Aunt Vera often made a boiled fruit cake and now I come to think of it, she also used lard and cold tea, so maybe that was a war cake of sorts. 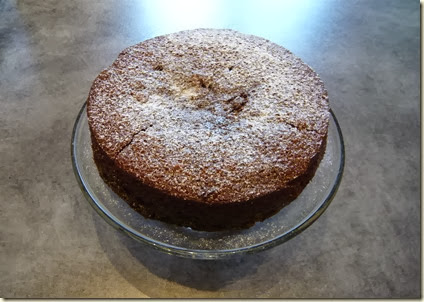 I have to say the cake would not win any beauty contest and I was a bit nervous about taking it to the CCC !!  It had a crater in the middle, a mottled top and the fruit had obviously sunk to the bottom, but I tried to imagine how pleased anyone would be to see any kind of cake, especially a fruit cake, on the tea table during the first or second world war.  I sprinkled it with icing sugar in an attempt to improve its looks but nothing was able to disguise the craggy exterior.  I just hoped the interior looked better. 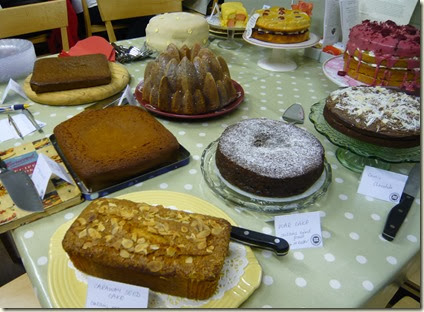 I placed the cake on the table with the others and was relieved that it was not the only plain cake on display.  There was an interesting collection including two ginger cakes, two battenburgs, one pineapple upside down, one classic chocolate and one nutmeg cake.  (I was surprised there was no Victoria sponge.)

I took the cake as Nick’s offering and for my own I took a caraway seed cake.  I was very pleased to find that by the end of the evening they had both been almost completely eaten up.  It appears that the introduction I gave for the war cake was so negative that everybody wanted to try a piece just to see if it was as bad as they expected !!  I managed to sneak the last slice home to have a proper taste myself. 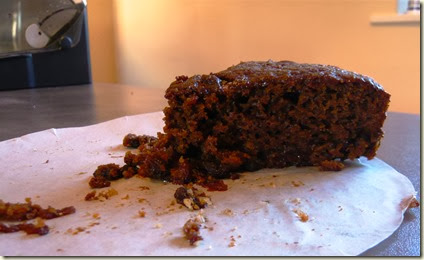 In fact, it was lovely.  Very moist with a chewy texture and the flavours were delicious.  Several people asked me how it had been made.  So now I feel less embarrassed about it I am also offering this cake for this month’s Tea Time Treats Challenge, organised by Karen of Lavender and Lovage.  The currant theme is “dried fruit”.  Currant theme ~ get it ??!!  Anyway, you can read the details here. There were lots of different recipes for war cake that I could have used but I based mine on the one that seemed most likely to work and taste nice, which you can see here.

This is how I made my version of war cake.  You need to start several hours before you want to bake the cake, to allow the boiled fruit to cool.

90g Trex vegetable fat (you could use white Flora or Cookeen)

Put the sugars, fat, fruit and water in a large saucepan.  Bring slowly to the boil and boil for three  minutes.  Leave to cool completely in the pan.

Put all the other ingredients in a bowl and whisk together.  Tip them into the cooled fruit mixture and stir well until there are no floury lumps and it is all fully combined.

Pour the mixture into the tin (it’s quite a runny batter) and bake for 1½ until it passes the skewer test.  It will still look wet on top.

Cool in the tin for 10 minutes then turn out carefully onto a wire rack.  Allow to cool completely before wrapping in foil and storing in an airtight tin.

Cook’s note ~ the cake is dense but fairly fragile as well as being sticky, so handle it carefully and as little as possible.

Cuts into about 12 slices.