At the weekend, if my dad isn’t coming for his dinner on Sunday (which he rarely does these days as he takes his lady friend to lunch instead), we try to cook something different and a bit special.  My dad is not fond of fancy food so when we’re not catering for him we can be a bit more adventurous.

Last weekend I plonked a pile of cook books in front of Nick and suggested that he choose something tasty.  After a few minutes he picked out a recipe for roast monkfish. 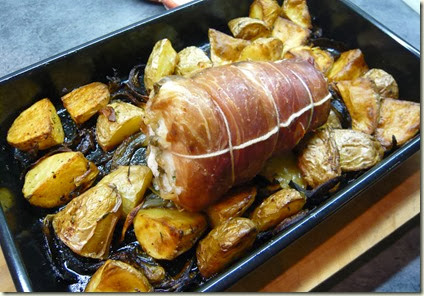 Roast monkfish, or gigot de lotte in French, is one of our favourite things to choose in a restaurant in France but this recipe is from Gino D’Acampo’s book Fantastico, so that makes it an Italian version.  He calls it coda di rospo al parma. 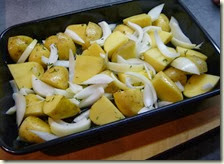 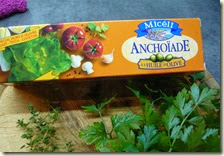 Basically it’s a monkfish tail, stuffed with anchovies, garlic and breadcrumbs, wrapped in Parma ham and roasted on a bed of new potatoes and onions. 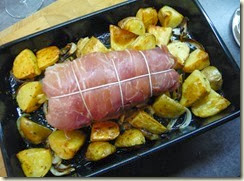 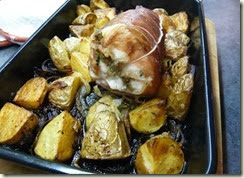 We hadn’t got any tins or jars of anchovies in stock but we did have some anchovy paste that we brought from France earlier in the year.  We also had a pack of Parma ham.  This had already crossed the English Channel three times!  We bought it in France in August, didn’t use it so brought it home, still didn’t use it so took it back to France where it still didn’t get used so we brought it back again.  It was definitely time to use it up !! 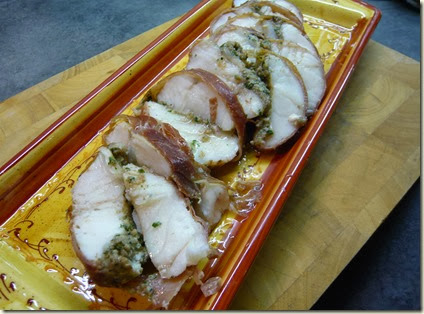 We have cooked monkfish like this before but roasting it on the potatoes was a great idea.  Mind you, we both had to read and re-read the recipe to work out the timings as it was not at all clear.  At first it looked like the potatoes should be cooked for nearly an hour before adding the fish, which didn’t seem right, unless you like your potatoes pretty crozzled.

But we sussed it out and I have to say, it was absolutely delicious, a real treat, and we will definitely be making it again.  You could use a nice chunky piece of cod if you can’t get hold of monkfish, and pancetta in place of the Parma ham.

4 anchovy fillets, or a good squirt of anchovy paste

Put the butter in a roasting tin in the oven so that it melts while the oven warms up and you prepare the potatoes and onions.  Tip them into the tin and shuffle them about so they are coated with the butter.  Season with salt and pepper and add the thyme.  Roast for 35 minutes, turning occasionally so the potatoes brown evenly.

Put the garlic, anchovies, parsley olive oil and breadcrumbs into a food processor and process until well mixed to make a paste.

Cut the monkfish fillet into two and spread the paste on top of one piece.  Lay the other piece on top and wrap the Parma ham or pancetta around it to make a parcel.  Tie string around it to hold it all in place.

After the 35 minutes, put the fish on top of the partly cooked potatoes and return to the oven for another 20 minutes.