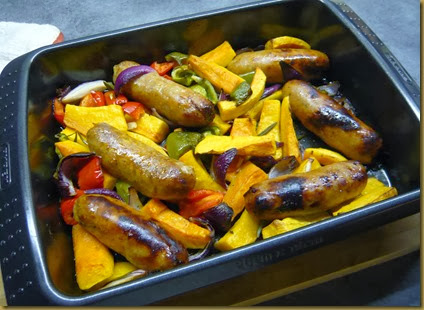 We are not very fond of Halloween in this house.  To be truthful, I have never liked Halloween very much at all, even as a child.  I have no happy memories of the children’s parties I attended here or in Scotland where I spent a couple of years as a little girl.  All that apple bobbing, silly costumes and daft ghost stories ~ I never quite got into it.  The “trick or treat” custom of recent decades is something we are not keen on either.

In recent years we have been known to either go out on Halloween, leaving the house in complete darkness to deter the trick or treaters.  Or to turn off all the lights, draw the curtains, keep the television on low and hope that nobody ventures up our long, dark drive. 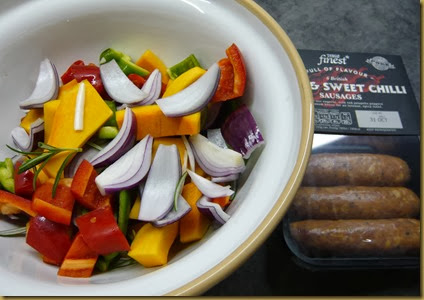 However, we do like a bit of pumpkin or butternut squash and are partial to a chilli flavoured sausage so on Halloween I decided to make a bit of effort to get into the mood.  I even got a bag of fun size chocolates in, just in case the doorbell rang and we were confronted by a small group of children in scary masks bribing us to give them chocolate in return for not slashing the car tyres, pouring weed killer on the roses or removing the hinges from the gate . 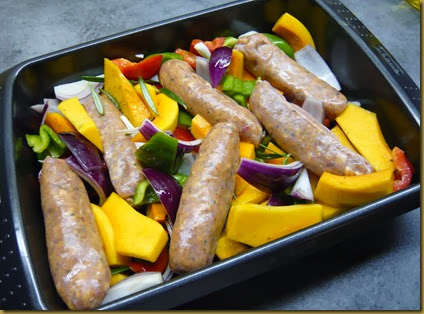 I simply Googled “squash and sausages” and several tasty looking recipes turned up, of which I chose this one.  It’s essentially a tray bake of vegetables with sausages tucked in and it was, I have to say, absolutely scrumptious. 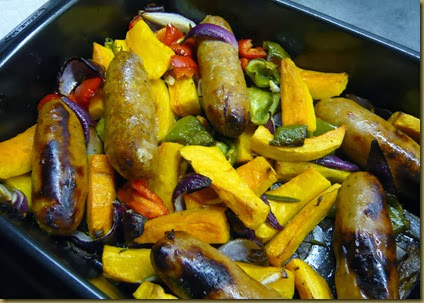 This is another one of those recipes that puts a tasty meal on the table in less than an hour from scratch, with very little washing up.  The original recipe states red peppers but I used the last red and green ones in our greenhouse, plus fresh rosemary from the garden.  This is destined to become another favourite of the house.  In fact it could almost be described as healthy with all those lovely veg ~ if you ignore the sausages that is.  (Or use low fat ones, which are hardly the same, but better than nothing.)

Next time I think I might add some whole garlic cloves and a sliced chilli to the veg for a bit of extra flavour, just to see what it’s like. 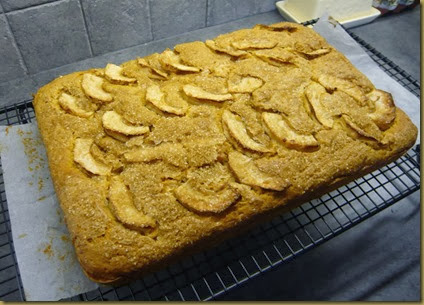 For afters we had a slice of spiced apple and pumpkin cake, served with a dollop of plain yoghurt.

I spotted the recipe in a blog called “Penelope’s Pantry“ and I have been waiting for just the right opportunity to make it.  Halloween seemed like as good a time as any.  I made a couple of adaptations but you can see the original here. 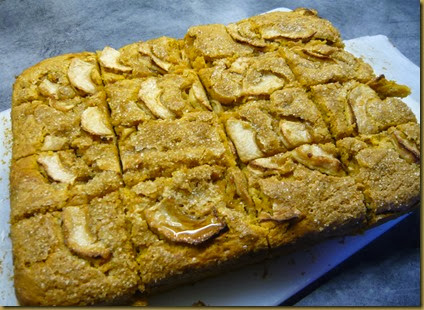 It’s made as a tray bake and it’s incredibly moist ~ even more so the day after baking, very much like a dessert cake with almost the consistency of a bread and butter pudding. 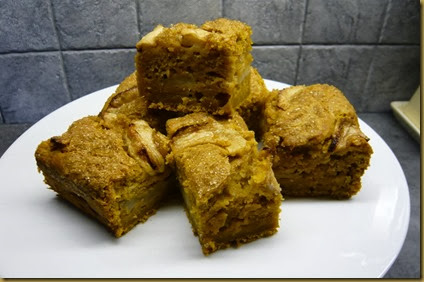 I adapted the recipe to make it using an all-in-one method, as per Delia’s advice and it worked really well.  Next time I think I would use more ginger and possibly some ground cinnamon as well, to make it even spicier.

Ingredients for the squash and sausage bake

a pack of 6 sweet chilli sausages, or any other sausages you like

½ a butternut squash, peeled, deseeded and cut into wedges

Put all the prepared veg into a large bowl.  Add the olive oil, salt and pepper, the leaves of the rosemary and mix together.  (This ensures all the ingredients are nicely coated with oil.)

Tip this all into a roasting tin and tuck the sausages amongst the veg.

Bake for about 40 minutes, until the veg are tender and the sausages cooked through, removing from the oven after 20 minutes, to shuffle the veg and turn the sausages over so they brown all over.

Serve with mashed potatoes, bread, or other veg of your choice.

Sift the flour, baking powder and ginger into a large bowl.  Add the butter, brown sugar, and eggs and beat together until well combine, using an electric whisk or mixer.  Add the pumpkin and mix briefly to combine.

Peel, core and slice the apples.

Spread half the cake mixture into the tin and arrange half the apples on top.  Repeat with the remaining mixture and apples.  Sprinkle the Demerara sugar on top.

Bake for 45 minutes or until golden brown and risen.  Leave in the tin for a few minutes before turning out onto a wire rack to cool before cutting into squares.

Serve slightly warm with cream, custard, ice-cream or yoghurt, or leave to go completely cold and serve as a cake.