Okay, so it’s Thursday, you have eaten everything you bought last weekend, you haven’t had time to revisit the  dreaded supermarket, it’s raining, you’re late home from work and hungry…….

A gratin is the answer.  This is exactly what we had for dinner yesterday. 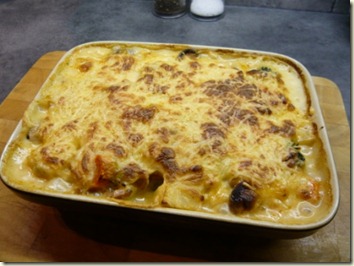 All you need is the last few remaining vegetables in your fridge or veg drawer, some grateable cheese, a bit of bacon or chorizo and dinner will be on the table in thirty minutes. 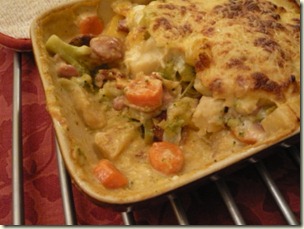 The variations are endless.  Just use any vegetables and cheese you have.  If you don’t have cheese suitable for grating but you have some goats cheese, brie or similar, just leave it out of the sauce and put slices of it on top of the gratin before you put it in the oven.  If you don’t have any bacon it’s nice with some chopped ham mixed in, or just with the veg and no meat at all.  A few prawns or a bit of smoked fish cut into pieces also works well.

½ a head of broccoli

a few slices of chorizo

2-4 rashers of bacon, cut into large strips or diced

a large knob of butter

a splash of vegetable oil

Peel and roughly chop all the vegetables into medium chunks.  Put in a large pan of boiling water and cook until almost cooked, still slightly firm or just as you like to eat them.

Meanwhile, heat the oil in a frying pan, add the onions, bacon, mushrooms and chorizo and fry until the onions have softened and the bacon is browned.

Next, put the butter, flour and milk in a saucepan.  Heat gently and stir with a whisk until a white sauce miraculously forms ~ this is the Delia Smith all-in-one method which you can find here.  Add most of the grated cheese and stir until smooth and season with salt and pepper.  If it’s a bit too thick, stir in a little more milk.  If it’s too thin, add a teaspoon of flour blended with mik.

Drain the cooked vegetables and return to the pan.  Tip in the contents of the frying pan and mix together.

Tip everything into an ovenproof dish.  Pour the cheese sauce on top to coat the veg.  Sprinkle the remaining grated cheese over the top and bake for 20 minutes until golden brown and bubbling.

Whilst it’s in the oven you can set the table, open a bottle of something suitable for a Thursday and wash up the three pans you have used.

Serve on its own, with bread, with chips, with jacket potato, salad, or anything you fancy.  We had ours just by itself and it was a hearty meal for two.