It is almost time for our annual charity cake stall at work so I was browsing through my many recipe books and came across a recipe for lemon drizzle traybake in Mary Berry’s Baking Bible.

(The recipe also appears on several websites, including the Good Food Channel here.) 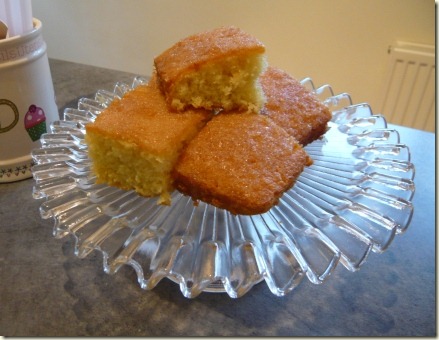 Now, I realise that lemon drizzle cake isn’t exactly exciting or exotic as a baking adventure, but I don’t make it very often so it was exciting for me. 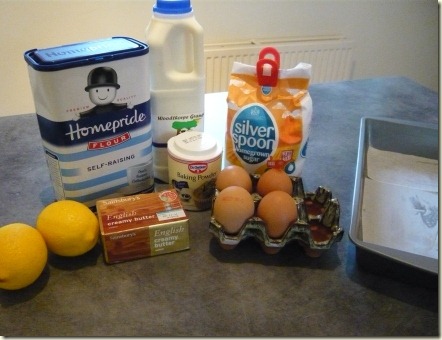 Actually, I did once make a lime and coconut loaf from the Be-Ro book a few years ago, which is similar in a way.  The cake had lime zest in it and lime juice drizzled over it.  I made it for a charity baking event at work and that’s where I learned the important lesson that the larger cakes with lots of icing slathered all over them are the ones that sell the best.  My lime and coconut cake was still hanging around when everything else had gone so me and my dad had to eat it all between us.  It was fabulously delicious, but didn’t look much. 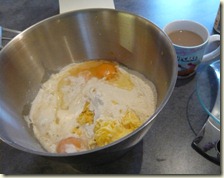 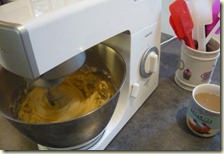 Anyway, I also recently bought a larger traybake tin, with our cake stall in mind.  I found that my ready-cut squares of baking paper from Lakeland were just the right size if you put two in and overlapped them.  Then I had the bright idea of cutting one square in half so that they fitted perfectly with no overlapping ~ you can see the effect in the picture of ingredients.  This was a big mistake. 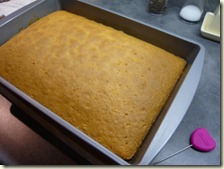 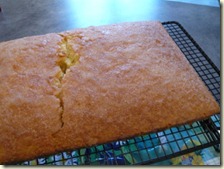 The cake was dead easy to make, using an all-in-one method, and baked perfectly.  But it was a big cake and when I tried to turn it out of the tin, it split roughly where the break in the baking paper was.  Rats !!

Next time, I will not be so clever (or thrifty, as I saved the other half of the square for use later) and use an extra long piece of paper that overhangs the ends of the tin as well, making it much easier to turn out. 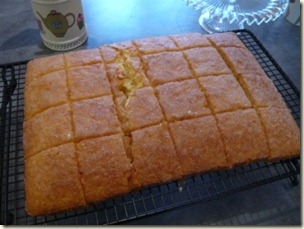 Luckily, the split was roughly where I wanted to cut the cake into squares, so I only lost a few pieces and you know what, the bits made an excellent treat to go with my cup of tea. 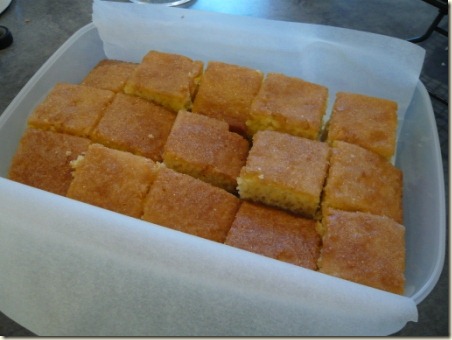 The flavour and texture were excellent.  I will definitely make it again.  My dad took the boxful of cake to his model engineering club where it was devoured within minutes of him arriving and someone saying “time to put the kettle on”. 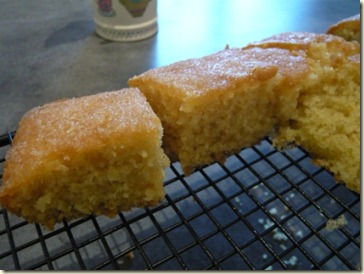 Put all the cake ingredients into a large bowl and beat until well mixed together.  This takes hardly any time at all in a food mixer.

Transfer the mixture to the baking tin and level the top.  Bake for 35-40 minutes until golden brown.

Leave to cool in the tin for a few minutes then turn out onto a cooling rack.

Mix the lemon juice and granulated sugar together and spoon it over the cake whilst it is still warm.  As lots of it will inevitably dribble over the edge onto the worktop, it helps to put a large tray underneath.

When cold, cut into 24 squares.

(The recipe said it makes 30 squares but I preferred them slightly larger!)