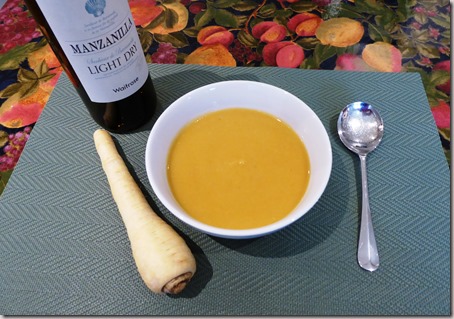 For at least the first forty years of my life I never made soup, not a single bowl of it.  I always thought that it was somehow complicated and mysterious and you would need lots of special pans and equipment.  It was only when I first read the recipe for vegetable soup in Nigella Lawson’s book “How to Eat” that I realised that in fact it was outrageously simple and I had been missing out all that time.

The only special equipment you need is a large saucepan or stockpot and a stick blender.  A food processor is also handy for chopping large quantities of vegetables but in reality a knife and board will get them chopped or sliced well enough as they cook down just as quickly.  Most recipes suggest transferring the cooked soup to a jug style of blender or food processor but I never do and always use my trusty old stick blender straight in the pan.

I was checking the contents of my veg drawer and realised that I had been over enthusiastic when buying parsnips for Christmas and I still had some that were more than ready for using up.  A quick browse of my cook books and five minutes later I was slicing them for parsnip and ginger soup.  Thirty minutes after that we were tucking in.  The recipe required fresh ginger which I did have but it was in the freezer.  That’s when I discovered that you can peel and slice it straight from the freezer.  I also added a few small pieces of butternut squash that were hanging around, hence the slightly deeper colour than if I had only used parsnips.

One of the things I learned from Nigella’s recipe is that many soups benefit from a good splash of dry sherry before serving.  Consequently I usually add it to all my soups, referring to it as “the mystery ingredient”!

This soup was easy and quick to make, absolutely delicious and wonderfully warming for a cold winter’s day.

25g or a large knob of butter

30g of fresh or frozen ginger, peeled and sliced

1 litre of vegetable stock (I made mine using Marigold powder)

A good splash (or a small glass) of dry sherry.

Melt the butter in a large saucepan or stock pot.  Add the ginger and cook for a couple of minutes, stirring.

Add the onion and parsnips to the pan, season with salt and pepper and cook for another couple of minutes.

Add the stock and bring to the boil.  Simmer for about 15 minutes by which time the vegetables should be soft and tender.

Remove from the heat and process with a stick blender until as smooth or lumpy as you like.  Stir in a good splash of dry sherry before serving.  Add a dollop of crème fraîche or swirl of cream to each serving if you like.