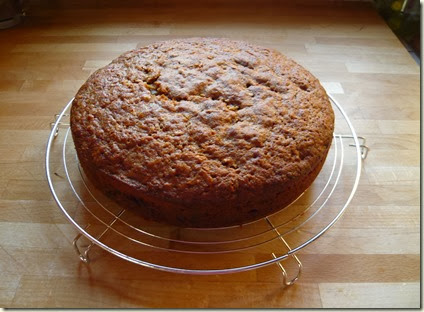 I spotted this recipe in the lovely Dom’s blog, Bellau Kitchen.  As soon as I read it I knew I wanted to bake the cake as soon as possible!

Dom made it as a loaf cake but as we were in France at the time of baking and my one and only loaf tin was otherwise engaged, I baked it in a 23cm round tin.  I had to bake it for a bit longer than stated in the recipe but it worked out perfectly. 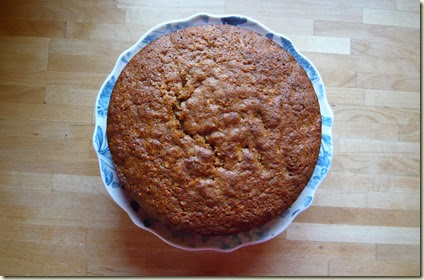 I also had to make a couple of substitutions according to what I had in my French kitchen cupboards.  I used golden raisins instead of sultanas and dark soft brown sugar instead of light muscovado.  It looked nice and moist when it came out of the oven so I decided not to add the orange and honey drizzle. 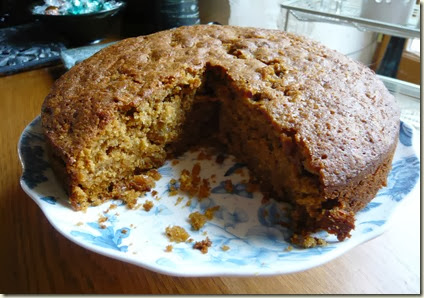 This was the perfect cake to round off the year.  Moist, fruity, spicy and delicious.  If you didn’t know it contained parsnips you would never guess I think.

And of course, as it contains no butter but plenty of vegetables it kicks off the New Year to a fantastic healthy start !!

So I would like to say a huge “thank you” to Dom for this recipe ~ and all the others I have either baked already or saved for future enjoyment ~ so many recipes, so little time !!

And a Happy New Year to everyone.  Here’s to many more delicious cakes and bakes in 2014.

the juice and zest of 4 clementines

Put the sultanas, honey and clementine juice in a small pan and heat gently for five minutes.  Set aside to cool.

Beat the eggs, sugar and flour together in a large bowl until creamy.  Add the raisins from the pan and all the other ingredients and mix well.

Spoon the mixture into the prepared tin, level the top and bake for about an hour until risen and golden.  Cool in the tin for 5 minutes then transfer to a wire rack.