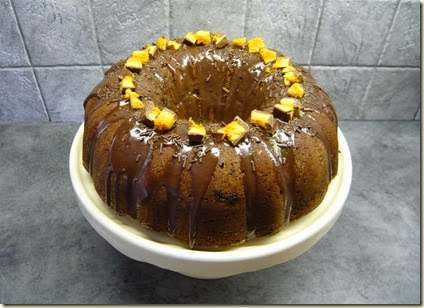 For this month’s We Should Cocoa Challenge the aim was to bake a chocolate show stopper cake to celebrate three years of the challenge.  So when I was thinking what to bake for my sister in law Kathy’s birthday a chocolate cake with something special about it seemed to be a good idea. 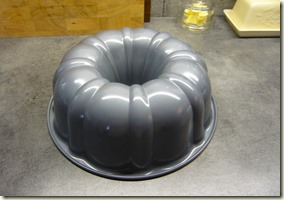 I found this Bundt tin in a local factory shop and was dying for an opportunity to use it.  I had been hankering after a similar design of tin made by Nordic Ware but this one was a fraction of the price at £5.99.  It’s pretty hefty and has a non-stick coating but I greased it and floured it really well and crossed my fingers. 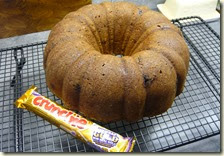 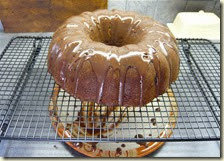 I was lucky – the cake turned out really well and although the definition wasn’t quite as sharp as it might have been with the more expensive tin I was pleased with the result.  (The Nordic Ware tin is still on my Christmas wish list though.) 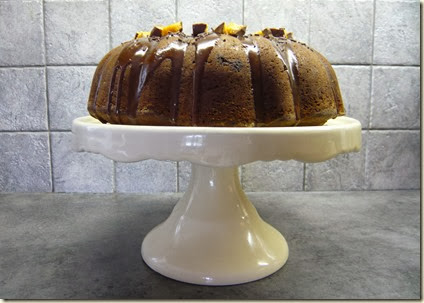 I was slightly concerned that the Crunchie pieces in the cake would become hard little nuggets ~ potential tooth breakers ~ once the cake was baked, but they melted away and added to the toffee flavour.  The pieces of chopped chocolate remained whole and made nice little hits of chocolate in every slice. 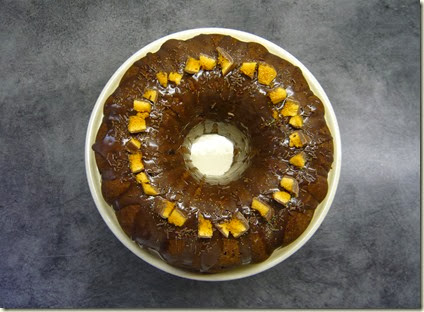 The milk chocolate and toffee combination worked really well ~ I sometimes find the intense flavour given by dark chocolate a little too strong. 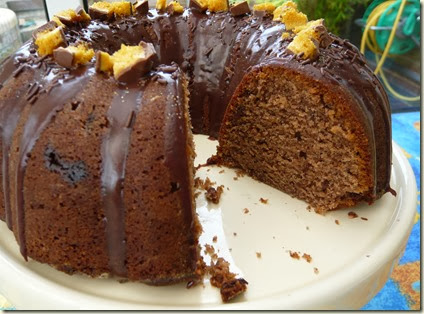 It was a huge cake and would cut easily into at least 16 pieces, ideal for a birthday party or any big crowd.  I used the basic Bundt cake recipe here as a basis for my adaptation. 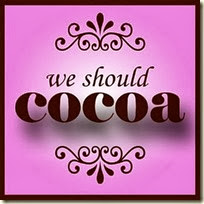 So many thanks to Choclette of Chocolate Log Blog for organising this month’s challenge, which is in honour of her partner Chele of Chocolate Teapot who has retired from blogging after three years.  You can see the details here.

For the icing and decoration:

In a food mixer (or by hand) beat together the butter and sugar until fluffy.

Mix the flour, bicarb, cocoa powder and salt in a separate bowl.  Chop the chocolate and Crunchie fairly small and drop the pieces into the flour mixture.

Beat the eggs into the mixture one at a time.  Remove the bowl from the mixer and continue by hand.

Sift one third of the flour mixture into the bowl followed by one tub of yoghurt and stir.  Repeat.  Then add the last third of flour including the chocolate pieces.  Stir well to combine.

Spoon the mixture into the tin, making sure to push it into the grooves.  Bake for 60-70 minutes, checking after 60.

Cool in the tin for 10 minutes then turn out onto a wire rack.

To make the icing, melt the chocolate and butter in a Pyrex or similar bowl over a pan of simmering water.  Add the milk and beat well.

When the cake is completely cold, spoon the icing over it so that it runs down the sides.  Place a large plate under the cake to collect the drips so that it can be spooned back over the cake.

Decorate with pieces of chopped Crunchie, sprinkles and glitter.

Cuts into a minimum of 16 pieces.