This month, Dom of Bellau Kitchen has gone all sweet for his Random Recipe Challenge.  We are invited to choose a book at random and pick through the cakes and desserts section at the back to make something sweet in honour of his birthday which is in September. 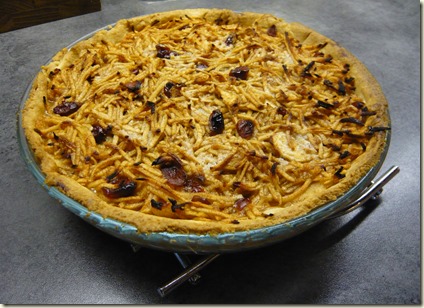 I was in France when the theme was “announced” and my selection of cookbooks in our little holiday home there is much more limited and rather different from the one here.  With eyes closed I ran my hand along the single shelf of cook books and pulled out this one by Linda Collister: 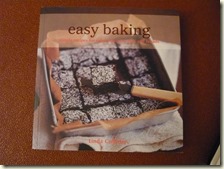 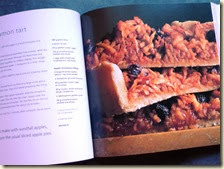 In spite of this being an absolutely gorgeous book, full of interesting recipes all beautifully photographed, I have never made anything from it.  So I flipped the pages and turned up a recipe for “apple cinnamon tart”.

I have actually looked at this recipe a few times before and rejected it, thinking that it looked too much trouble for what is essentially an apple pie.  So now was my chance to find out exactly how much trouble it was !!

Believe it or not, even though we were chez nous for the next two weeks, I never got the opportunity to make it, even though I managed to find a small packet of dried cranberries in the local supermarché.  But I stuck to the rules of the challenge and brought the book back home with me rather than “cheat” and choose a different one when we got back to England. 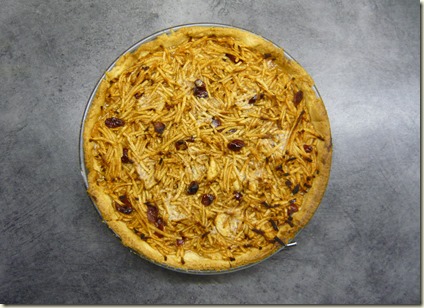 The pie is made using a sweet pastry case and filled with grated apple that has been tossed in cinnamon, and some dried fruit – I went for the cranberry option. 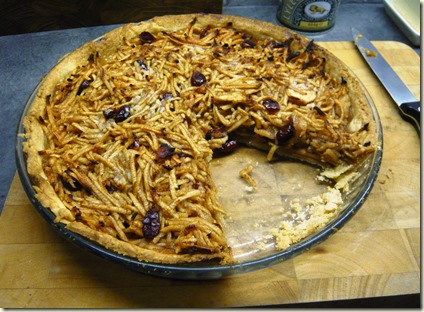 The end result was in fact definitely worth the effort.  The combination of the sharp dried cranberries worked well with the Bramley apples and cinnamon.  Although next time I think I would halve the quantity of cinnamon making it a much more subtle hint of flavour.  Mind you, the fruit did look strangely brown like matchsticks due to the coating of cinnamon – but it was reassuringly exactly like the picture in the book.

This is a recipe that is easy enough to do when you want something a bit different from an ordinary apple pie and I will certainly be making it again.  We had ours warm with a blob of thick crème fraîche – the one called “crème fraîche d’Isigny” and is very much like a really good clotted cream.  (Having been introduced to it by friends in France we liked it so much that we brought a jar back with us.) 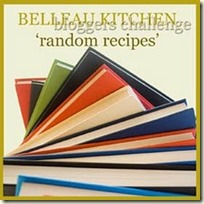 And it’s thanks once again to Dom for getting me to delve into a previously neglected recipe book and discovering a little gem of a recipe.  You can read all about this month’s challenge here.

Happy Birthday Dom, I hope it’s a good one !!

2tsp ground cinnamon (I would us 1tsp next time)

To make the pastry, mix together the dry ingredients, rub in the butter and bring together with the egg yolk and water.  Add a splash more water if it’s too dry.  Wrap in cling film and chill for 20 minutes.

Roll out the pastry to line the tin or dish and chill again while preparing the filling.

Peel and core the apples then grate coarsely and put into a large bowl.  Add the cinnamon, sugar and cranberries and mix well to combine.  Spoon the mixture into the pastry case and drizzle the golden syrup over.  Dot with the butter.

Bake for about 20 minutes or until the pastry is golden and the apple cooked.  If you have used a loose bottomed tin, leave to cool slightly before turning out.  Serve warm.

Serves 6-8, depending how large you like your slice of pie.