Not long ago my friends Tim and Pauline, who live not far from our little cottage in Le Grand-Pressigny, posted about the old-fashioned pudding, the “Betty”. 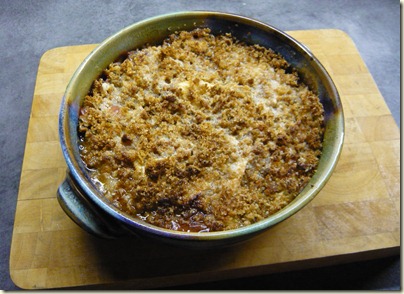 I hadn’t eaten a Betty for years and the last time it was a fancy version served up for dessert in a gastro pub.  But you can’t beat the original Betty, made essentially with fruit and breadcrumbs.  The last time I saw a recipe for it was probably in an old copy of Woman’s Weekly – which is, I confess, at the risk of losing all credibility completely, one of my guilty secrets !!  (Great knitting patterns.)

Anyway, I was so taken with their post that I just had to have a go myself, that very day.  My dad was coming round for his dinner and I knew he would love it.

Tim’s recipe is so simple and uses shredded suet and demerara sugar with the breadcrumbs.  You can read his version, written in his own unmistakeable style, here in their blog “De la bonne bouffe”. 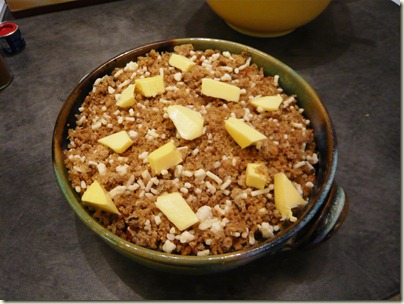 You could use pretty much any fruit, provided it is cut into smallish pieces, and flavour with anything you like.  Rhubarb and ginger might be nice, or rhubarb and orange, apple and blackberry, pear, plum, the possibilities are endless.  I used some leftover granary bread, a couple of Bramley apples and some leftover strawberries, with Atora Light, which is shredded vegetable suet, and cinnamon.  I just peeled the apples and sliced them straight into the dish, just like my mum used to do when making her apple crumbles and pies.  It’s a great way to use up leftover bread and bits and bobs of fruit. 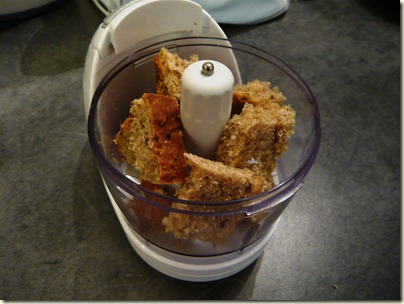 I don’t think my mum ever made a Betty.  In those days food processors didn’t exist so it was probably easier to rub fat into flour to make a crumble than to make breadcrumbs from leftover bread.  She often made bread and butter pudding though….now that reminds me of something else I haven’t had for years, too !! 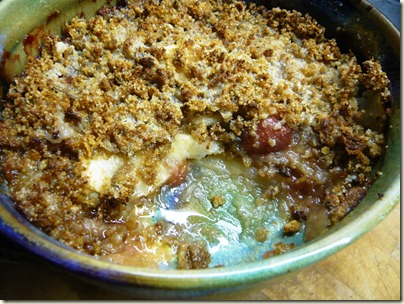 In the end my dad didn’t come for dinner.  He had been out for lunch and couldn’t manage a second big meal so he cancelled.  Sadly we had to eat all the Betty between the two of us……..such a hardship !!

I am linking this post to “Bookmarked Recipes” on the blog “Tinned Tomatoes”.  Bookmarking recipes for future reference is one of the great joys of reading blogs and I have loads of recipes in mind to cook at some point ….. so many recipes, so little time !!

Here’s my version of Strawberry and Apple Betty

a handful of strawberries, hulled and halved

Blitz the bread in a food processor to make breadcrumbs.  Mix together the breadcrumbs, suet and sugar in a bowl.

Bake for 45 minutes until golden brown.  Serve warm with cream, ice cream, Birds custard or whatever takes your fancy !!