A DUO OF CRANBERRY SAUCES

Fresh cranberries first appeared in our local supermarkets several weeks ago, which was obviously way too early because lots of them ended up in the reduced bins.  Which tells me that most people don’t want them in October or even November and I still think many people don’t know what to do with them at all !!

Anyway, it’s lucky for me because I enjoy making my own cranberry sauce and there were bargains to be had !!  Usually I make a good quantity of sauce, put it into little ramekin dishes and freeze it so that all I have to do is take one out of the freezer a few hours before I want it. 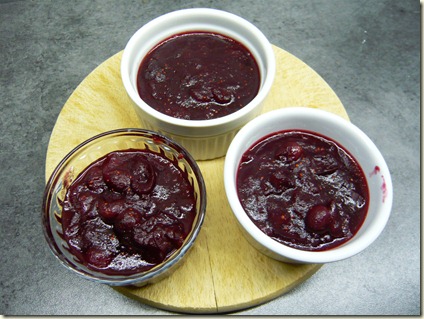 I seemed to have misfiled my usual recipe for cranberry sauce and when hunting around for another one I came across an interesting alternative by Jamie Oliver for apple and cranberry sauce.  It sounded lovely and I had plenty of cranberries so I decided to have a go at that as well and make both sauces. 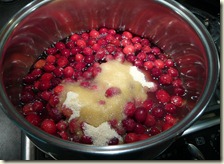 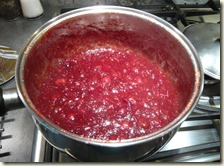 The traditional sauce recipe is just cranberries, sugar, orange juice and zest, and red wine or port.  It cooks up very quickly and looks and smells glorious while it’s on the hob.

It makes a lovely thick, bright red sauce, not too sweet or tart, with a nice hint of orange.  I like to leave some whole berries in it and not blitz it completely smooth.  (Since I have been making my own I tend to find a lot of the shop bought ones are sometimes rather sweet and runny.) 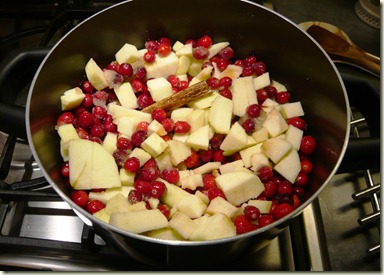 However, Jamie’s cranberry and apple version has Bramley apples and cinnamon in it but no orange.  You make it in a similar way but store it in jars, which makes it useful to give away as presents. 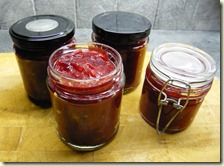 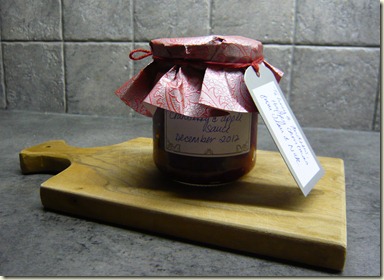 Jamie’s sauce was delicious – a nice fusion of apple and cranberry flavours and quite different from the usual cranberry sauce.  I shall be serving both with the Christmas bird to see which people prefer.  You can see the original recipe here.

Recipes for both sauces are given below:

zest and juice of one large orange

Put everything except the orange zest into a large pan.  Bring to the boil and simmer gently, uncovered, for about 30 minutes or until the berries have burst and the sauce has thickened.

You can if you like lift out some of the berries, liquidise the remainder and put the reserved berries back in, with the orange zest, before serving.  I didn’t do this as I liked the effect the sauce already had.

Add the orange zest and serve warm or cold.

The sauce will keep in the fridge for a day or two if made in advance.  I froze mine in ramekins ready to serve when thawed.

Put all the ingredients in a large pan with a good splash of water.  Bring to the boil and simmer gently, uncovered, until the berries have burst and the apples softened.

This should take around 30 minutes and the original recipe says to boil down until the sauce has thickened but in fact I had to add a splash or two more water to stop it from catching.

Remove from the heat and leave to cool.  Transfer into sterilised jars.  Once opened, keep in the fridge.