When we were chez nous in Le Grand-Pressigny a few weeks ago, we invited our friends Elizabeth and Colin round for a BBQ.  Elizabeth can’t eat anything with gluten in it so we had to put our thinking caps on and be careful what we planned to eat.

A starter could be fairly straightforward and the main course was the usual BBQ food, no problem there so long as we paid attention to any marinades and dressings, but dessert was the tricky one.  I didn’t want to do the obvious fruit salad, meringues or chocolate mousse.  What I really wanted to do was to bake a cake. 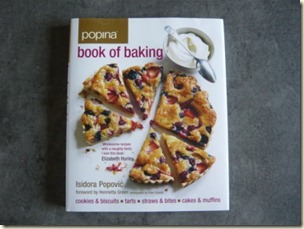 My favourite cookbook at the moment is the “Popina book of baking”.  I had taken our local library copy with me and in it was a recipe for ”very chocolate cake”, which was gluten free, so that could be a possibility for our dessert. 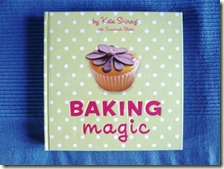 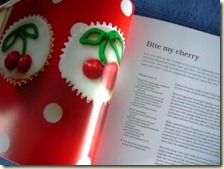 However, I continued browsing through my selection of cookbooks that I keep in France ~ always a complete joy, to be sitting on our little terrace overlooking the rooftops of the village with a cup of tea and a pile of recipe books ~ and found a recipe for gluten free cherry cupcakes in “Baking Magic”.  I didn’t have any cherries but I did have some delicious raspberries which I thought would do instead.  The recipe uses ground almonds and a lot of whisked egg white.  It was a few days before our guests were coming so I decided to have a practice.  It’s a good job I did. 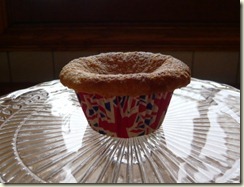 They didn’t work.  The cakes rose beautifully in the oven then at the last minute sank horribly, producing a crater in the middle where the raspberry had sunk to the bottom of the cakes.  They tasted lovely, but unless I was prepared to fill the crater with loads of icing they were not exactly the thing I wanted to serve to guests.  (Further reading suggested that over-enthusiastic whisking of the eggs can cause last-minute sinking.)

But I did glean an important snippet of information from the recipe.  It said:

“1tsp baking powder, or, if you want to make the recipe gluten-free, ½tsp bicarb and 1tsp cream of tartar”.

Sure enough, when I looked very carefully at the small print on my tub of baking powder, it said it contains wheat.  This is something the Popina book didn’t mention, in fact it said quite clearly in the recipe for “very chocolate cake” that it was a “seriously rich and creamy gluten free cake”, yet it mentions nothing about the need for gluten free baking powder.  Naughty, I thought.  I could very easily have made this cake with my ordinary baking powder, not realising it could be a problem for Elizabeth.  It only takes a little gluten to upset the applecart. 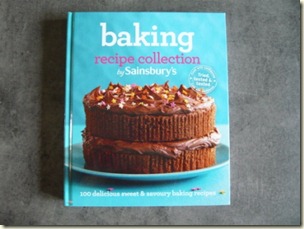 In the end I decided to use another recipe for “flourless chocolate torte” which I found in this Sainsbury’s recipe book .  It uses no baking powder at all, so I decided to go with that. 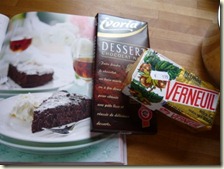 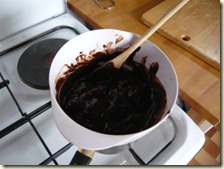 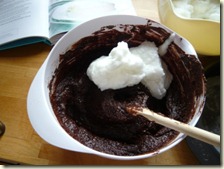 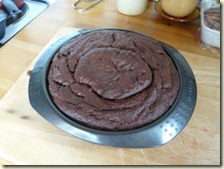 If I had paid more attention to the recipe before I started, I would have noticed that it made a huge cake, baked in a 25cm springform tin.  I had nothing anywhere near that big in my French kitchen, so I filled my largest cake tin and put the rest of the mixture in a loaf tin to make a second cake. 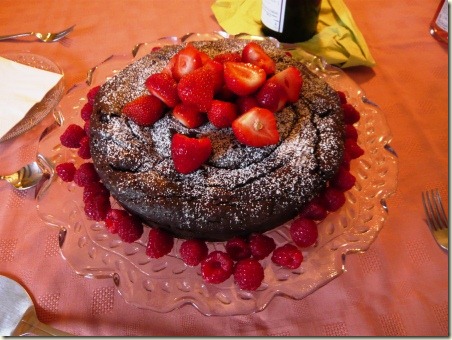 Its appearance was not too attractive when it came out of the oven but with some icing sugar sprinkled on top and a few berries to decorate, it looked very presentable on a nice cake stand.

It was seriously chocolatey with an intensely chocolate flavour, definitely for grown-ups and not for the faint-hearted.  For myself,  I would be tempted to leave out either one of the bars of chocolate or the added cocoa powder next time.  But if serious chocolate is your thing, this is the recipe for you.

Melt the chocolate and butter together in a bowl over a pan of barely simmering water (or in a microwave).  Stir in the vanilla extract.

In a large bowl, beat the egg yolks with 50g of the caster sugar until pale in colour then pour in the chocolate mixture.  Fold in the ground almonds and cocoa powder.

In another bowl, beat the egg whites until stiff.  Gradually fold in the remaining 100g caster sugar until combined.

Fold one third of the egg white mixture into the chocolate mixture.  Then gently add the rest until just combined.

Spoon the mixture into the tin, spreading evenly.  Bake for 30-35 minutes.  Let the cake stand in the tin for another ten minutes before turning out.

When cool, dust with icing sugar and serve.