I have made raspberry and banana muffins before, see here, and they turned out very well.  I had some very overripe bananas going begging so I decided to make them again for my dad’s mates at the club. 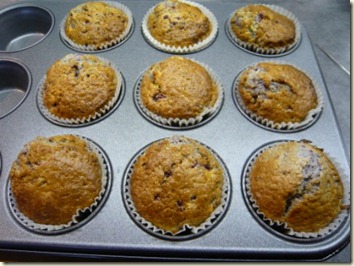 We have few raspberry canes in our garden that produce a handful of fruit every day all through the summer and often until early October.  I don’t know what variety they are and they wouldn’t win any beauty contest but it’s nice to have a few fresh berries on our cereal every day if we can be bothered to go and pick them.  Those that go unpicked are no good the next day. 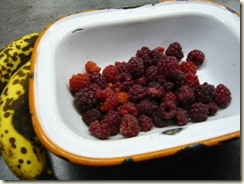 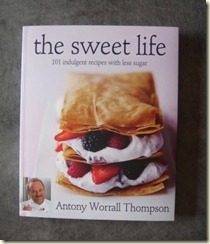 The recipe came from “the sweet life” by Antony Worrall Thompson.

All the recipes in the book use a sugar substitute called Splenda but I use proper sugar instead.  It works if you replace 8 tblsp Splenda with 100g sugar.

However, while I was out with Lulu for her morning constitutional, I picked a few blackberries.  It was a lovely warm and sunny morning, just how it should be in September, and all was well with the world. 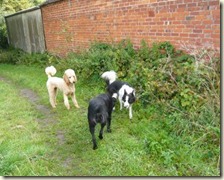 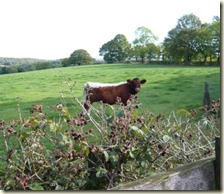 Lulu with friends and a young bull watching us pick the blackberries.

When I was looking at the recipe, I thought if it works for raspberries and bananas, I wonder if it would work for blackberries and apples?  So I decided to have a go. 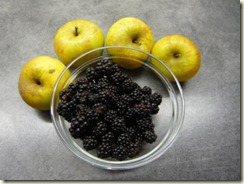 I used some eating apples that we were given by my friend Elizabeth when we were last in France.  She gave us loads and we brought a lot of them home with us.  They’re absolutely delicious and I think possibly cox’s  orange pippins.

I considered doubling up on the ingredients and then dividing the mixture in two, adding raspberries to one half and blackberries to the other.  I then decided it was just as easy to make a second batch with blackberries whilst the raspberry ones were cooking. 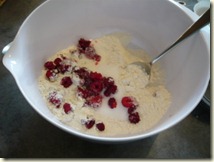 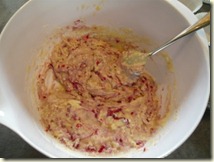 The raspberries turned to mush.

The recipe suggests using frozen raspberries and in fact they are better as they hold their shape in the mixture.  Mine turned to mush when I started to combine them with the other ingredients, whereas the blackberries stayed in one piece beautifully. 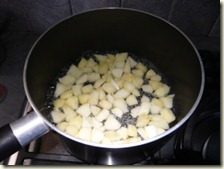 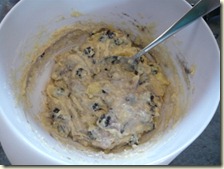 The blackberries kept their shape.

I decided to cook the apples slightly before putting them in the mixture, just in case they might be still firm when the cakes were done.  It seemed to work. 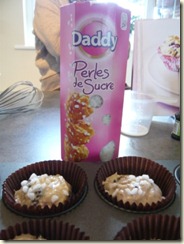 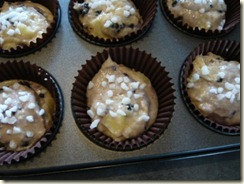 I also decided to sprinkle the blackberry ones with some crushed sugar cubes, just for a change, before baking.  I bought these in France and have never seen them for sale in the UK ~ not in my part of the UK anyway. 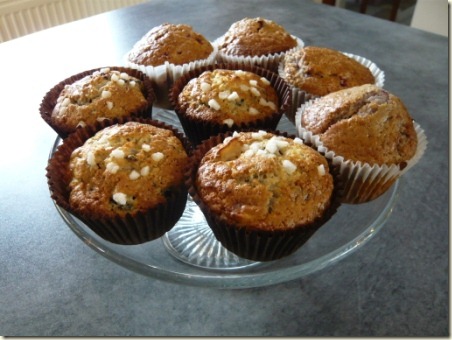 Both types of muffins were scrummy.  I would definitely do the blackberry and apple ones again.

If using apples, peel, core and chop them in small pieces.  Put in a saucepan with a splash of water and cook gently until beginning to soften.  Allow to cool.

Sift the flour and baking powder into a large bowl.  Stir in the sugar and raspberries (or blackberries).

In a separate bowl, beat the egg with the vanilla, melted butter and milk.  Stir this into the dry ingredients with the banana (or apples).  Avoid over mixing and stir until just combined.

Divide between the paper cases.  Sprinkle with the crushed sugar if using.

Bake for 20-25 minutes until risen and golden.  Cool on a wire rack.