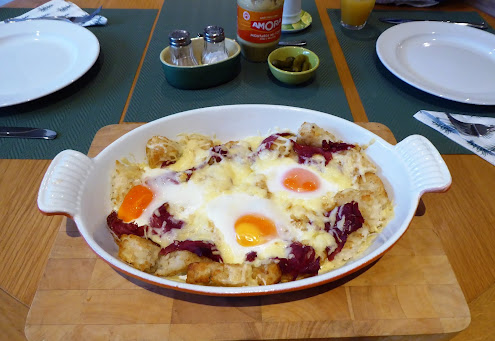 I really do not like this internet shopping lark, especially for groceries.  You don't find out until it's too late that some of what you ordered is not available and when we have allowed substitutions they have sometimes been quite bizarre.  My brother for example recently ordered a cheap stew pack of veg to use in his new soup maker (see previous post - I treated him to one as an aid to getting more veg into his diet) and ended up with a hugely overpriced bag of pre-prepared cauliflower and broccoli florets instead.  Who in their right mind would pick that as a substitution?  Why didn't the picker pick one onion, carrot and turnip for him instead?  Because it was picked by someone who knows nothing about veg, that's for sure.

We always over order to make up for the items that we can't get, otherwise meal planning is impossible, like Ready, Steady, Cook every day for half of the time.  How I long for the days when I could browse the supermarket shelves, use the shopping list as a guide and take anything else I fancied instead, just because I could.

Anyway, we always end up trying to use up stuff before it goes out of date or before the next lot is ready for collection.  On this occasion I was looking at an unopened pack of pastrami.  I love a pastrami and red pepper wrap for lunch but somehow ate other things instead this last week, leaving the unused pastrami on the shelf.

I googled how to use up leftover pastrami and came across this recipe on the BBC Good Food website.  It sounded delicious and a great way to use up a good amount of it.  I also decided to use some frozen hash browns in place of the potatoes.  (It occurred to me it would also be good with frozen sauté potatoes.  I have no idea if you can get them in the UK but we often buy them in France.)

We never eat hash browns.  I bought them some time ago because I had spotted a recipe somewhere that used them as a topping for something like a shepherd's pie.  The moment passed, the recipe got forgotten and is now lost, and the hash browns languished unwanted in the freezer.  So I used half of them for this recipe and they were scrumptious!  The good part is we have exactly the right ingredients left to have the same thing again on Sunday!

about half a bag of frozen hash browns (I used seven)

a handful of grated cheddar cheese

Remove from the oven and reduce the temperature to 180°C / 160° fan / gas mk 4.  Cut each hash brown into 3 rough chunks and tumble into a suitable ovenproof dish.  Aim for a single layer but with no gaps when choosing your dish.

Tear the slices of pastrami into rough strips and tuck in among the hash browns.  Sprinkle the grated cheese over and make a well for each of the eggs.  Break an egg into each hole and return to the oven.  Bake for another 8-10 minutes until the whites are set but the yolks still runny.

Serve immediately with mustard and gherkins.