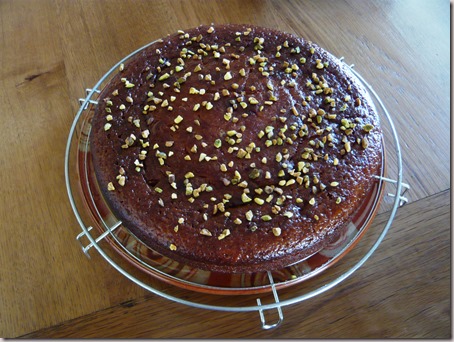 Nick made this cake for a CCC event last year.  It’s a Rachel Allen recipe from her book of a few years ago called “Bake”.  Looking at the front page of the book I see that it has £2.49 written in pencil, which means that it was one of my charity shop purchases, although I don’t remember which one or when I bought it, but it’s in brand new condition.  A bargain.

This was one of those moist, almost gooey cakes with an indulgent texture due to the addition of ground almonds and the good soaking with the syrup which contains lime juice and rosewater.  I am nervous of rosewater and 1-2 tablespoons sounds like a lot so I urged Nick to try just the one and it seemed to me to be just right. 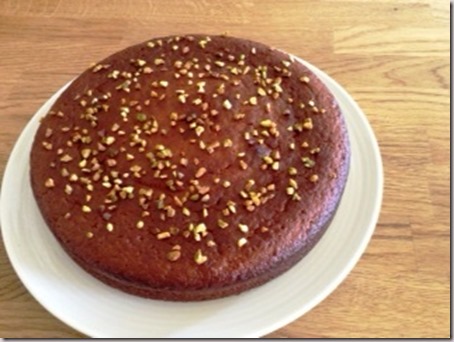 Unfortunately I forgot to take a good picture of the cake, especially after it was cut, which is a shame because the texture was lovely and it kept well.  I liked it a lot and thought it tasted rather “exotic” due to the rosewater and the pistachios.  It didn’t look very glamorous, rather plain in fact, especially alongside some of the rather elaborately iced cakes on the table at the CCC meeting, but its unpretentious appearance hid sophisticated flavours.  Definitely one to surprise and impress.

The recipe appears in several places on the internet if you want to see it, one of which is here.  The other book I have where it makes an appearance is “World’s Best Cakes” by Roger Pizey.

Sift the flour, salt and baking powder into a large bowl, add the almonds and sugar and mix together.

In a separate bowl, combine the eggs, honey, yoghurt, oil and lime zest.  Make a well in the centre of the flour mixture, add the egg mixture and whisk together until combined.

Pour the mixture into the tin and bake for about 50 minutes until done.  Cool in the tin for 20 minutes.

While the cake is cooling make the syrup by boiling the water and sugar in a small pan for about 5 minutes until it is reduced by half.  Add the lime juice, remove from the heat to cool and then add the rosewater to taste.

Make fine holes in the top of the still warm cake and spoon the syrup over.  Scatter with the chopped pistachios and add a few rose petals for decoration just before serving if you like.