TURKEY, LEEK AND MUSHROOM HOTPOT FOR ONE 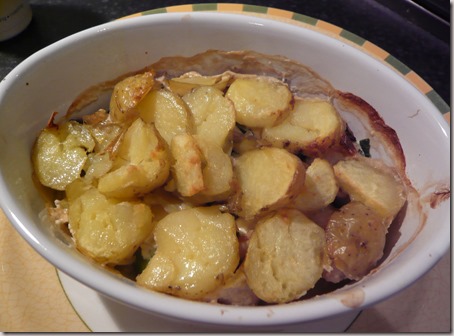 Nick returned to France recently, to close up the house for the winter.  That sounds awfully grand, I think, but in reality it means to tidy the garden, put the geraniums in the barn, turn off the water, cover the furniture with dust sheets and set the heating to come on if it gets below a certain temperature over the winter.  This all takes time, especially the gardening bit, and we had no time to do it before we did our dash back to the UK to move house.  We ummed and ahhed about whether we needed to make the trip and could manage without – trust the house to look after itself over the winter – but in the end we decided that one of us should go and we’re glad that we did.  We now have peace of mind that we have done as much as we can to help the house survive the worst of the winter without us.

So with Nick in France I found myself cooking for one, dog and cat sitting, for nearly a week.  Also trying to lose weight.  Cooking for one is something I have always found a real challenge.  In my younger days I went through a “Guinness and cornflakes” phase where I simply could not be bothered to cook at all.  I survived and got away with it, presumably because I was younger and more active.  These days I no longer play squash and dread to think what a couple of bottles of Guinness could do for my waistline.  So, with healthy eating in mind I wondered what I could make with the turkey mini breast fillets I had bought and the veg in my fridge. 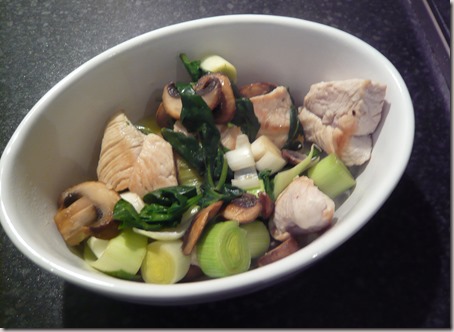 I had some leeks and mushrooms and part of a bag of spinach.  With a bit of internet research I turned up this recipe on the Sainsbury’s website and adapted it for just one person.  I used a method from my Philadelphia Cheese cookbook to make a sauce instead of using packet white sauce as per the recipe. 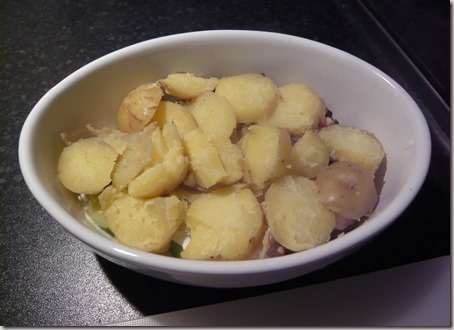 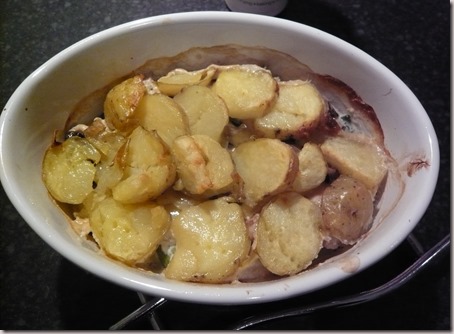 It was very tasty, quick and easy to do and I would do it again for myself or for two or more people.  I had mine with some positively virtuous green veg.

two or three turkey (or chicken) mini fillets, depending on size and appetite.

a small handful of spinach leaves

Put the potatoes into a pan of boiling water and cook until tender.

Meanwhile, cut the turkey into bite sized pieces and brown in a frying pan which has been sprayed with a few squirts of cooking spray.  Remove from the pan and put into an individual sized pie dish or other deep baking dish.

Brown the mushroom pieces in the pan, then remove and put into the dish along with the leeks and the washed spinach.  Season with salt and pepper.

Mix the cream cheese and milk together to make a small quantity of sauce and spoon over the meat and veg.

Thickly slice the potatoes and arrange over the top of the filling.  Spray with a few squirts of the cooking spray and bake for 15-20 minutes until browned and bubbling at the edges.

Serves one person.  Can be multiplied up easily for two or more people.