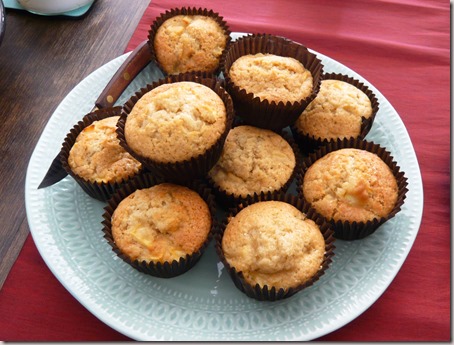 I don’t make muffins too often, in fact not often enough.  When I made these muffins for a CCC “anything goes” event, I had quite forgotten how nice muffins can be.

The “anything goes” theme is one where members can bake anything they like, not just cake, which made a nice change and it was fun to see what people thought of to bring.  There were sausage rolls, quiche, meringues, eclairs, flapjacks and madeleines.  And of course my muffins.

(Just in case you’re wondering, and you’re probably not, why there is a small knife with the plate of muffins, it’s because at a CCC event where everyone likes to try a small piece of everything on the table, a whole muffin is not a good idea.  Half a muffin would be more than enough if there was to be room in the tummy for all of the other delights on offer.  Those who have ever been to a CCC event will completely understand this problem!) 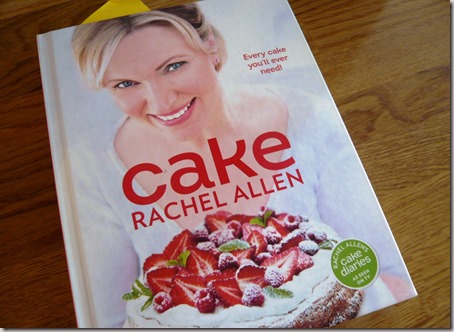 After a pleasant hour or so of leafing through my ever growing collection of recipe books I chose a recipe from this one by Rachel Allen.  I like her recipes, have used quite a few and have never had a failure with any of them.  The recipe is actually for pear and ginger muffins but she suggests apples as an alternative. As we had several apples going begging in the fruit bowl I decided to use them.  I wondered how they would go with ginger as opposed to the more traditional cinnamon and it turned out to be a delicious combination. 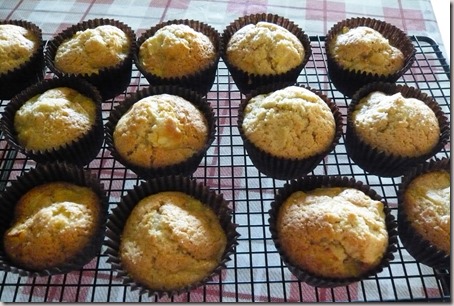 Thinking about it, one of the reasons that I don’t make muffins more often is that generally they don’t keep too well.  They can be slightly stale after one day and definitely bird food after two or three.

However, in the recipe it says to “whisk together until smooth” which kind of goes against the concept that “lumpy batter makes light muffins”.  (I can’t exactly remember where I read that phrase but think it might have been in a Nigella Lawson book.)  But, having every confidence in Rachel Allen’s recipes, whisk it I did, until nice and smooth.  The result was that the texture of the muffins was more like a cake than a muffin, with the added delight that they were still perfectly nice to eat several days later.  Curious.

In fact, with the quantity of mixture and the texture of the muffins it occurred to me that it might work as a bundt cake - the next time I have a surfeit of apples.  Anyway, apple and ginger is a winning combination.  Cinnamon makes me nervous as it takes only a smidgen too much of it to make a cake taste slightly soapy.  It’s not so easy to overdo the ginger and although a whole tablespoon seemed like a lot actually it was just right.

Sift the dry ingredients into a large bowl.  Add the eggs and oil and whisk together until smooth.  Fold in the chopped apples.

Spoon the mixture into the muffin cases, filling each one about three quarters full.  (I use an ice cream scoop which makes it easy to get them evenly filled).  Sprinkle with demerara sugar.

Bake for 20 minutes or until golden and springy to the touch.  Cool in the tin for 5 minutes then transfer to a wire rack to cool completely.  You can dust with icing sugar or ice with a water icing if you like, instead of sprinkling with demerara sugar.

*Makes 12-15 muffins, depending on how much you fill the cases.